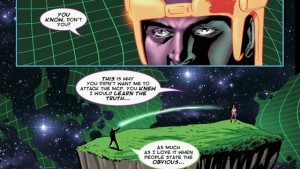 Tron was written and directed by Steven Lisberger and was one of the first major studio movies to make extensive use of computer graphics. The graphics are quite dated by now, of course, but when you watch it just keep in mind that these special effects were amazing in 1982. The previews for Tron Legacy, of course, have updated computer graphics, loads of shiny goodness.