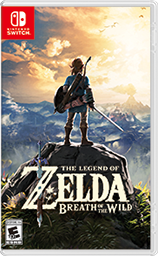 The Legend of Zelda: Breath of the Wild is an action/adventure exploration game released by Nintendo for the Wii U and Nintendo Switch in March 2017.  It is the latest in one of Nintendo’s most popular franchises.

The game begins as Link wakes up in a strange place with no memory of how he got there and a voice in his head telling him where to go.  Soon he finds the Sheikah Slate (which to our modern eyes looks like a tablet computing device like an iPad) which stores maps and objectives and other information he’s collected about the world, and can be upgraded with various abilities that seem like magic but seem to be based in technology.