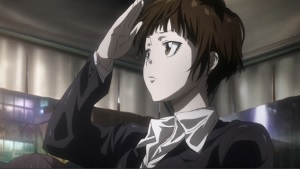 Psycho-Pass is an original self-contained anime from 2012 that I missed during initial broadcast. I’m generally not a big cyberpunk dystopia fan, so I only came back when I kept hearing about it. This review covers the first series, which is stand-alone.

I’d never thought about how much different American TV storytelling is from Japanese until I watched Psycho-Pass and realized how western its presentation is. Character development, particularly for the supporting cast, feels paced out like I would expect on an American show, with small nuggets here and there that lead to an eventual payoff, and the world itself draws clear inspiration from Philip K. Dick (particularly Blade Runner and Minority Report).

Combat is visceral and limited to what is realistically possible, not just what looks good, so there are few explosions and no death defying leaps. Despite the protagonists being members of the police force, they can and do screw up even when it counts.

The result feels like a western live action drama, except that it’s an animated series from Japan and most of the characters are Japanese.

Like its more famous cyberpunk counterpart, Ghost in the Shell, Psycho-Pass asks questions about the state and validity of its world. In this future, all aspects of life are governed by the impenetrable Sibyl System.

Citizens are subjected to cymatic scans which register their mental health and ability to think outside the law, and people whose Criminal Coefficients rise beyond a certain point on the index are labeled latent criminals and taken into therapy (by force if necessary). With therapy, it’s possible for those people to return to society, especially if caught early, but a fair number don’t return and remain in isolation wards away from the rest of the population.

Criminal acts and violence tend to mentally stress the well-being of everyone around them, resulting in everyone’s coefficients going up, so the idea behind Sibyl is that it’s better to lock away the few who would endanger the many, and the result is that Japan is so safe that most people don’t even lock their doors.

Psycho-Pass follows the story of Division 1 of the Public Safety Bureau’s Criminal Investigation Department as told through the eyes of Akane Tsunemori, the new inspector who joins the team at the start of the show. The unit is composed of two inspectors, who are citizens in good standing, and four enforcers who are latent criminals given a limited amount of freedom in order to do their job, which is to flush out and capture other criminals, latent or otherwise.

Since one needs to be able to understand criminals in order to be equipped to capture them, it’s generally not possible for an inspector to do the meanest parts of the detective work, because if they were capable of thinking that way, they would be a latent criminal themselves.

Much of the interpersonal drama between the characters has to do with the inspector/enforcer divide and how it affects the judgement and behavior of the characters involved. Inspector Ginoza, Akane’s senior at the start of the story, warns her not to befriend them and to keep a professional distance, but Akane can’t help wanting to understand them and see them as people. Though Ginoza’s attitude initially seems to come from a sense of superiority, over the course of the show we learn that’s not the case at all.

Sibyl keeps most people safe, but it’s not ideal, and some enforcers are former inspectors who succumbed to notions of revenge or distrust over the course of their jobs. One enforcer was labeled as a latent criminal when he was five, and becoming an enforcer was the only way he would ever go out in the world. Even employed by the Bureau, he can’t go anywhere except the office and his living quarters unless an inspector is accompanying him.

Being a crime drama, Psycho-Pass largely focuses on the failures of the system and how criminals can get around it. What do you do when the system cannot properly assess a criminal, when enforcement is only possible if Sibyl can read them? It starts with mostly stand alone episodes that build into a larger story arc, which wraps up by the end of the series.

The Sibyl System is brutal to those who don’t fit neatly within it, and there are no moments of epic heroism or revolutions of any kind. Division 1 doesn’t have a change of heart where they fight the system or help people escape from it. Rather, the characters acknowledge that the system is imperfect, but it’s the best they’ve got so they’re going to enforce it.

Psycho-Pass is completely stand alone, though there is a second series that was animated a couple years later.

The first episode in particular is a gem at worldbuilding, character introduction, and setting the stakes. Without a wasted minute, viewers know exactly what they’re signing up for, and Psycho-Pass does not disappoint.

Pluses: dystopian cyberpunk at its best, excellent worldbuilding, trying to be a moral person in an inflexible system

Minuses: some members of Division 1 never get much character building time, Kogami is promo-ed like he’s the main character but he’s pretty one note, execution of criminals is usually ridiculously violent

Psycho-Pass is currently streaming at Crunchyroll (subtitled only) and Funimation (both subbed and dubbed, but subscription required). Funimation has licensed this for retail distribution in the US.