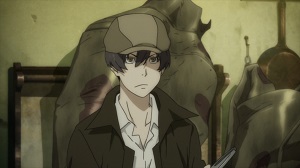 91 Days is an anime love letter to mafia films. Set in the 1930s when Prohibition is in full effect, its cast is filled with gangsters and bootleggers, led by a protagonist on a single-minded quest for revenge. The haunting opening credits perfectly encapsulate the violent world that Avilio has chosen to inhabit, while showing the psychological toll his charade is costing him.

When I first started the series, I was a little concerned about how much I would like Avilio, born Angelo Lagusa. His father belonged to the Vanetti mob family and was killed along with the rest of his immediate family during a change of power. As a child, Angelo escaped the slaughter and then disappeared for seven years from everyone he knew, only to return at the start of the show because he receives a mysterious letter giving him the names of the men who murdered his family.

Now going by Avilio Bruno, he begins integrating himself into the Vanetti family so he can kill the men responsible.

Avilio is a laconic character and nigh undeterred, but he’s not without personality, and part of the reason I love the opening credits is because they allow the audience to see the inner conflict that must be happening before we can actually see it play out on screen. The title card for 91 Days even forms the space between the 9 and 1 with a silhouette of Avilio holding a gun behind his back. His revenge relies on keeping up his masquerade, that he’s a trusted friend and ally, while plotting the deaths of those he’s befriending.

But the masquerade is hard, and requires Avilio to be every bit as ruthless as the men he’s trying to bring down. Though Avilio doesn’t say much, and we aren’t privy to his inner thoughts, we can guess well enough that he doesn’t want to get to know his targets as people, and yet he has no choice but to do so if he’s to get close enough to the don himself.

He does this mostly through Nero, the son of the current don. After a quick dust up throws the two together, Avilio finds the opening he needs to become one of Nero’s most trusted subordinates. The two have a great chemistry together. Nero is boisterous and wears his heart on his sleeve, and Avilio is sulky and prone to doing rather than speaking. The biggest problem between them is that Nero is one of the men responsible for killing Avilio’s family.

In mafia media fashion, the gangsters are not all about shooting up other people, and have lives where they are also devoted family members, loyal friends, and religious even when they can’t stop sinning. The more Avilio sees during his time with Nero, the more the audience wonders if he’ll be willing to pull the trigger, knowing that he’ll destroy lives like they destroyed his own.

And yet, he stains his hands so early it becomes impossible for him to back out without consequences. It’s clear that Avilio is willing to accept some level of collateral damage if it gets him where he needs to be, and he lies and betrays as easily as breathing. Avilio never gets to the point of being completely unsympathetic, but many times the audience feels like Corteo, his friend and only confidante, watching Avilio slide deeper and deeper into a pit from which he might never return.

Though there are parts of the series that feel like they don’t belong in a period mafia show (the character Fango and the bounty hunter after Nero in the early episodes), every time 91 Days drops into a small town grocery store, or I look at how the characters dress, the detail grounds me in the setting again.

The biggest flaw in the series is probably its ending. After a pitch perfect lead-up to the finale, the final episode feels drawn out and ends ambiguously, which is disappointing for those who prefer something more concrete.

It’s thematically fitting, considering Avilio’s journey, but the result is an unsatisfying bump at the end of what has otherwise been an excellent series.

I would still recommend 91 Days though because it’s a fantastic mafia revenge story and it’s pleasantly self-contained since it’s not based on any other media. Avilio is a crafty protagonist who I never get tired of watching, and I like that we very rarely get inside his head. His actions speak in place of his words, and it’s a testament to the animation that we can feel for a protagonist who says so little.

Pluses: perfectly captures the dissonance between a mafioso’s private and public life, Avilio is an extremely canny and interesting protagonist to watch, great sense of tension

Minuses: sometimes Avilio’s plans only work because other characters are too stupid, Corteo sometimes fades out of the story like the writers forgot him, ambiguous ending

91 Days is currently streaming at Crunchyroll and is available subtitled. Crunchyroll has licensed this for eventual retail distribution in the US.