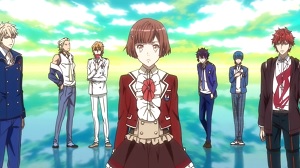 Dance with Devils was a pleasant surprise considering that I almost didn’t watch it, and it ended up being one of my must-watch shows of the season. It’s not a brilliant show, but as a guilty pleasure? Hell yeah!

Ritsuka Tachibana thinks she’s a normal high school student, until her house gets ransacked by vampires looking for a mysterious Grimoire and kidnap her mother in the process. The various members of the student council turn up alternately trying to help or seduce her, as they’re all devils who are similarly after the Grimoire and believe she is key to finding it. And to top it off, her brother comes home from overseas and he’s secretly an exorcist, but that doesn’t mean she can entirely trust him either as there’s a lot he’s not telling her about their family history.

This sort of story has been done before, and in the anime format looks particularly like an adaptation of an otome game (dating game for girls), but surprisingly the game is actually coming later as it’s not out yet even in Japan. What makes Dance with Devils different from others of its kind is that it’s a musical, and things that are not quite so original, or even laughable, when taken as straight dialogue, are perfectly permissible when done in song.

The student council introduction number where each of the four male devils is singing about how badass they are pretty much won me over, and every episode since then finds a way to work in at least one song which showcases the personality of the character singing it. Not all the numbers do it for me, but the sheer absurdity of having singing devils and vampires goes a long way. It’s also hard to hold it against a show that manages to work in a number that features a chorus of demonic Pomeranian dogs.

As for the plot itself, there is one, but it’s fairly bare bones. Most of the series is comprised of Ritsuka trying to find her kidnapped mother and getting baited by vampires (who are definitely the bad guys) and sometimes by devils (who are the “good” guys but not necessarily nice people) while her brother goes full-on overprotective sibling over her.

Each of the devils falls in love with Ritsuka in his own strangely warped way which culminates in all of them fighting for her in the inevitable devils versus vampires showdown over the fate of the Grimoire. It’s clear from the narrative just which devil is the one intended to be her main love interest, though they oddly do not spend that much time together since this is a short series and each major character has at least one episode focusing around them.

Through the show, Ritsuka exhibits questionable judgment (walking down dark alleys with the last people any sane girl should be walking with), but she is ultimately responsible for saving herself in the final confrontation, which was much appreciated even though it felt a little too late.

That said, I did like her decision at the end of the story. It makes the ending a little bittersweet rather than the happily ever after one would expect in a show involving a single girl and a bunch of suitors, but I liked it for taking a more realistic route as Ritsuka is still a teenager and the choice she made feels like the right one.

Surprisingly, there is a stinger at the end of the series, leading to the possibility that there will be a sequel of some kind. If that’s the case, I would happily watch that one as well.

As a series on its own Dance with Devils is solidly B-material, but as a musical, it works so much better that I recommend it to anyone looking to try something new.

Pluses: musical, protagonist is ultimately architect of her own destiny, devils versus vampires if that’s your thing

Minuses: characters are fairly unoriginal, protagonist spends a lot of time being pulled around by other people, most of the romantic leads are real jerks

Dance with Devils is currently streaming at Funimation and Hulu and is available both subtitled and dubbed (though dub requires a Funimation subscription). Funimation has licensed this for eventual retail distribution in the US.