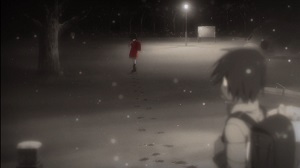 Erased is based on the manga Boku Dake ga Inai Machi (The Town Where Only I am Missing) and while I’m sorry to lose the more poetic title, the story itself is no less meaningful.

Satoru Fujinuma is a 29-year-old man working a dead end job as a pizza delivery guy. He used to have dreams of becoming a manga artist, but like many people, those dreams didn’t pan out and he’s doing what he can to get by.

Unlike most people though, Satoru has what he considers a bothersome ability. Every now and then what he calls Revival kicks in and he flashes back a few minutes in time. After the rewind, if he makes the effort to look around, he can find out where something has gone wrong and take the opportunity to change it. This allows him to save a kid’s life, though the reason he considers the ability bothersome is that his intervention usually costs him in some way, like ending up in the hospital after stopping a wayward truck.

When Satoru’s mother visits he’s visibly annoyed, because he’s trying to be independent. He doesn’t like her prying into his friendships or the fact he’s still single without a girlfriend, but circumstances rapidly change when she’s murdered in connection to a serial killer case from his childhood and Satoru is framed as the culprit.

The shock of his impending arrest by the police triggers his Revival ability and sends him all the way back to his final year of elementary school, a few days before his eleventh birthday, and a few days before his classmate Kayo Hinazuki is abducted as the first in a series of child murders.

Once he gets over his shock, Satoru concludes that if he manages to save Kayo’s life, then he’ll save his mother’s life as well, but as a kid he’s a person of limited means. What Satoru has in his favor though is that he knows the future. He knows the last time Kayo was seen alive and where. He knows who the accused will be even though he believes that person is innocent.

As he works on his plan, Satoru doesn’t entirely behave like a kid on the verge of being eleven (since he’s mentally his adult self) and though he tries to fit in, his friends notice the change in him, his sudden drive and maturity.

But while in the past, perhaps more importantly, we see Satoru’s relationship with his mom, who is still alive as her younger self. Satoru realizes what he lost when she was killed and he now trusts her implicitly, understanding that she always has his back. And Satoru’s mom is really the world’s most awesome mom, allowing him an incredible amount of freedom because even though she’s not aware of his Revival ability, she understands he’s trying to do something incredibly important to him.

When his mom was murdered in the opening episode, I was disappointed, because even in the first episode it was possible to see her as a fully realized character with her own agency (she figures out the serial killer’s identity, which is why she gets killed in the first place), so I was very happy that she plays an active role in the events of the past.

Watching Satoru relive his childhood with a better appreciation and understanding of his mom and his friends is the real joy of Erased, and his plan to foil the serial killer is easy to buy into. It never goes out of the realm of what a real live kid could accomplish (given the appropriate drive and knowledge), and the way he befriends the lonely and abused Kayo so she never has reason to be alone is one of the show’s charms.

If there’s any fault to Erased it’s in the villain. Narratively there are very few potential culprits and most viewers who think about it will correctly conclude who the killer is long before any proof comes out. It’s a little frustrating because Satoru himself doesn’t have enough information for him to realistically identify the killer before the reveal happens. He doesn’t have the benefit of knowing that he’s in a story.

There is also, perhaps, a little too much time spent on the villain’s motivation, which I don’t think the show really needed. It’s hard to justify why someone would kill children in a way that would make sense to the audience and it feels like it had to be shoehorned in to make the climax work.

Aside from that weakness, the rest the show comes together in the end, giving a real feeling that things have changed for the better. I like how Satoru emerges from his experience as a more confident person, at ease with himself, and it’s easy to see how he’s grown between the beginning and the end of the series due to his determination to save Kayo, his mother, and the other children who were killed.

“Erased” is lovely combination of a second chance to be a better person and a mystery thriller. It’s not perfect, but definitely worth a watch.

Pluses: engaging characters, child Satoru is interesting to watch and cheer for, his mom isn’t a passive character and is in fact one of the show’s active players

Minuses: killer’s identity is narratively easy to figure out, villain’s motivation is nonsensical and doesn’t really add anything, Airi is an overall superfluous character who could be cut from the story but was presumably left in so adult Satoru could have a love interest

Erased is currently streaming at Crunchyroll and is available subtitled. Aniplex of America has licensed this for eventual retail distribution in the US.