This week, in honor of Father’s Day, we’re posting something a little different. Since I started writing short stories, I’ve been sharing every single one of them with my dad, even the ones I should probably be embarrassed to show my dad. He reads each one and then we talk on the phone about what he liked and didn’t like, what he understood or didn’t understand, what themes the story brought to mind, etc. He’s enthusiastic but honest, and I look forward to every phone call.

Dad’s no stranger to writing. He’s a retired Lutheran pastor and has been writing a weekly sermon for decades, and for fun he has written up some short nonfiction tales about his life on the farm and other parts of his life. But he had never written any fiction. After reading so many of my stories, he decided to write a fiction short story. I found it entertaining and (with his permission) I wanted to share it more widely. I’ve edited for grammar and spelling, and things like paragraph size, but have otherwise left it unaltered. I hope you enjoy!

PS: Dad wrote the story longhand, photocopied it page by page, and sent it to me in the mail. I typed it out for posting. I expect you’ll find that this medium of communication is very fitting for the story.

I Won!
by Richard Steffen

Technology tried to take over my life, but I won! I’ll tell you my story.

It all began innocently a number of years ago. My wife Fern got a cell phone. I asked her “Why did you get a cell phone? What do you need it for? What’s wrong with the phone on the wall?”

She sweetly pointed out that our old phone was stuck to the wall. She sometimes wanted to talk on the phone when she was away from home.

I asked her “What’s wrong with the pay phones you find at truck stops and hospitals? Can’t you make calls on them?”

She just smiled and said “I don’t spend much time at truck stops and hospitals. I like talking on the phone when I’m out in a park, or driving down the highway. I like to be able to make a call wherever I am.”

I asked “What is so important to say on the phone that it can’t wait until you get home?”

How could I argue with that? She was so smart! She kept her cell phone and I got one too. We had many wonderful talks on our cell phones. But I had this uneasy feeling that technology was trying to take over my life.

Technology has a way of sneaking into your life through the back door. My wife Fern got a computer. I asked her “Why did you get a computer? What do you need it for?”

She smiled and said “I can look up information on the computer for my teaching. It will be so handy.”

I asked her “What’s wrong with books? Can’t you look up things in a book?”

She smiled and said “Yes, I could look it up in a book, but a computer is much faster. With a computer I can find the information I need in less time, and then I will have more time to spend with you!”

What could I say! She was so smart! But I still had this uneasy feeling that technology was trying to ruin my life.

When my wife Fern was alive she took care of technological things in the house. When Daylight Savings Time began I would go around the house moving the old style clocks one hour ahead. Fern would reset all the digital ones, it seemed so easy for her. Fern saw technology as her friend; I have always felt that I am at war with technology. Technology tried to take over my life, but I won. I’ll tell you how I did it.

After I retired from being a parish pastor, I moved to an apartment in Owatonna, Minnesota. My battle with technology continued. After getting rid of my computer I decided the TV was next to go. It had always bugged me when the volume would go up during the commercials, and no one seemed to be able to do anything about it. The content of the programs wasn’t that great anyway, so I simply stopped watching TV. The TV still stands in the corner, but I don’t watch it anymore. I won round two with technology.

My kitchen stove was the next to go. The only time I used the kitchen stove was to fry eggs and boil hot dogs. One day the electricity went off in my apartment building. The digital clock kept blinking off and on and it was driving me crazy. I couldn’t find the directions of how to set the time, so I started turning dials and pushing buttons. Then a buzzer started going off, and I couldn’t get it to stop. I slid the stove away from the wall and unplugged it. I haven’t used it since.

With the computer, TV, and stove out of commission, I had now won round three with technology. If this kept up I would soon be living in a cave with no modern appliances at all.

The next to go was my car. I had always liked my old Chevrolet Malibu which I called James. It was easy to drive with none of the modern gadgets of the newer cars, but it was getting old, so my son David bought me a brand new car with all the modern technology you could ever dream of. It was very thoughtful of him, but my new car has been a disaster from the start.

To get in the car you need to press a number of buttons on a keypad to open the door. I usually cannot remember the numbers so I can’t even get in. When I’m lucky, I get in the car and there is a new sequence of numbers to start it. It usually takes me half a day to get the car going. When I finally head down the street the GPS system kicks in with a voice telling me where to go. With that voice yacking at me all the time I get so frustrated I just go back home and put the car back in the garage. I haven’t used my car now for six months. When my son David calls and asks how the car is working, I tell him it is working just fine. I don’t have any trouble with it at all. I don’t have the heart to tell him it hasn’t left the garage since last summer. Yes, I am really winning the battle against technology.

Without a car I need to walk everywhere. I’m doing okay because the grocery story isn’t very far away. But even walking can be a challenge these days. To get to the grocery store I have to cross a big street with a stop-and-go light and walk signal.

After I ran out of groceries I started crossing the street in the middle of the block, but almost got hit by cars a number of times. Finally drivers were calling the police department about the old man that was crossing the street anywhere and causing traffic accidents. Finally a squad car came to my apartment and a police officer escorted me to the police station and had me transferred to the city jail.

I am now living in a padded cell in the Owatonna city jail. They are very nice to me here. I don’t have to deal with any electronic devices anymore. They bring me food and water and a change of clothes each day. They even give me a few magazines that I can read. My life is very simple now. I don’t have to worry about a computer, or a cell phone, or a TV, or a kitchen stove, or my car, or the stop-and-go light down the street. I can just sit and read magazines, sleep, and eat, and daydream about the good old days.

You see, I won! I am completely free of technology now. No buttons, no buzzers, no GPS voice telling me what to do. What I wonderful life I have. I won!

Editor’s note: For anyone who is concerned, although some of the story is based in real life events, my dad does not live in a padded cell.
–David 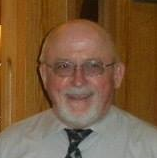 Richard Steffen is a retired pastor living in Owatonna, MN. His wife, Fern, passed away a few years ago.