As a former Periodicals Lead at Barnes & Noble, an author and editor …for White Wolf Games and Witches & Pagans Magazine, a micropublisher, webcartoonist, and a now-former Realms of Fantasy columnist, I can give you an answer for that.

Right now, and until the book-selling business catches up with the changes of the last decade, not a damn thing.

The first mass-circulation magazines originated through a combination of news-and-fiction publication and advertising. During the Victorian era, companies with something to sell either teamed up with newspapers and dime-store publishers, or simply released their own magazines. Much of the Victorian social atmosphere (including the “you-must-buy-THIS-in-order-to-be-socially-acceptable” message still driving many magazines today) came from magazines published by the companies that were selling the items in question. Etiquette magazines were published by clothing manufacturers; technology magazines were sold by machine manufacturers, and so on. As paper and printing became cheaper throughout the 1800s and early 1900s, literacy rates rose and audiences expanded. To spread out the expense involved in publication, the corporations sold advertising to other companies as well. Thus, the “golden age” of print media was funded largely by advertising.

In time, as a distribution system emerged, the publishers would sell their periodicals to distributors; the distributors would take a huge cut of the selling price and then handle the transactions with newstands and bookstores. Advertising still paid the majority of the costs involved with the periodicals themselves – by that time, the publishers received a mere 1/2 to 1/4 of the selling price. To “save on costs,” distributors gradually eliminated the stage wherein unsold periodicals were returned to the publishers; although books were often returned for that refund cost (allowing them to be resold elsewhere), magazines and newspapers were simply trashed.

Thus, a publisher would pay to produce a large quantity of periodicals, sold them a virtual loss, paid for the process with advertising, and then refunded the difference between sold and unsold copies… usually off the back of the next print run. Along the way, the majority of printed periodicals wound up in the garbage.

That’s the system we have today.

And it is fucked.

It was ALWAYS fucked, but now – with rising print costs, POD technology, media competition on all sides, declining interest in print media, alternate venues for distribution and content, taxes added to every step of the process, and taxes placed as well on publisher inventories (which drive publishers to fill their Dumpsters with unsold goods once or twice a year), the unspeakably BROKEN nature of this system is inescapable.

Since the proliferation of the internet and the explosion of net-based content, print media – periodicals especially – has declined. Fewer people read books, let alone magazines, because there are so many other media with which to spend time, money and attention. Fewer copies are sold, yet – thanks to an archaic retail policy called “Wallpapering”(*) – vast quantities of books and periodicals are still being produced. Selling venues will demand 10,000 copies of a magazine, buy them on 60-90-day payment terms, sell 1500 of them, trash the rest, and demand credit or a refund from the publisher for the other 8500 copies… payment due usually before the original payment even arrives. This is why the last decade has seen publishers of all kinds being mowed down like French troops charging German machine-gun nests in World War I. Because THE SYSTEM IS BROKEN, and yet everyone’s still playing the game like it’s 1970, not 2010.

Currently, there is no way to make a truly profitable virtual magazine, short of packing it with advertisements and selling spin-off goods.(**) Steampunk Tales is a quality virtual magazine, and yet the sales have been so low that authors get less than $10.00 a story in royalties, if that much.(***) It’s not that Steampunk Tales lacks quality – it’s great. And it’s not that the publishers don’t work hard – they do. It’s that people still feel a disconnect between virtual media and tangible payment. They may very well donate money out of goodwill, but when faced with the idea of paying a mandatory cost for virtual media, most folks opt not to.

So, the short version of this long post: The next generation of publishing must work by different rules. It cannot be “all content is free” – that’s unsustainable, as creators and publishers need to be compensated for their work. It cannot operate by the old system, either – that system has ALWAYS been unsustainable.

As a micropublisher myself, I believe a large element of that future lies in small-run publications sold more-or-less directly to its audience, with little profit but little waste. Right now, however, the dinosaurs – booksellers, publishers, authors, even audiences and critics – are stumbling around like the old rules still apply. They DON’T. Traditional magazines, I believe, are headed back to their original status as advertising venues and – yes – vanity presses. Regardless of the quality involved, the old market model cannot sustain them.

So what can be done? We change the rules, work our asses off, and pray that we can forge a new system out of the ruins of the old before we all go broke. Because if we can’t manage that, everybody loses.

* – A policy based around displaying huge stacks of goods to foster “an impression of prosperity.” The venue buys more units than it expects to sell, “wallpapers” the shelves with them for a while, and then returns the unsold units for a refund.

** – This is how webcomics can become profitable; I know, as I publish one myself…not that mine is profitable yet.

*** – Again, I know this from personal experience. I used to write for Steampunk Tales, and from the three stories published there, I’ve made virtually nothing. 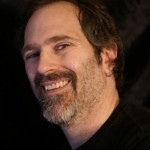 Author, dancer, hypercreative malcontent and more, “Satyr”Phil Brucato has been a professional writer for 20 years. His work spans from game design with White Wolf Game Studio, West End Games, Laughing Pan Productions, and Silver Satyr Studios; to interviews and articles for BBI Media and Realms of Fantasy Magazine; essays in Disinformation Press; and fiction in various venues. Oh, yeah – and a webcomic called Arpeggio, too. Also, check out his Facebook Author page, and Steampunk Tales.