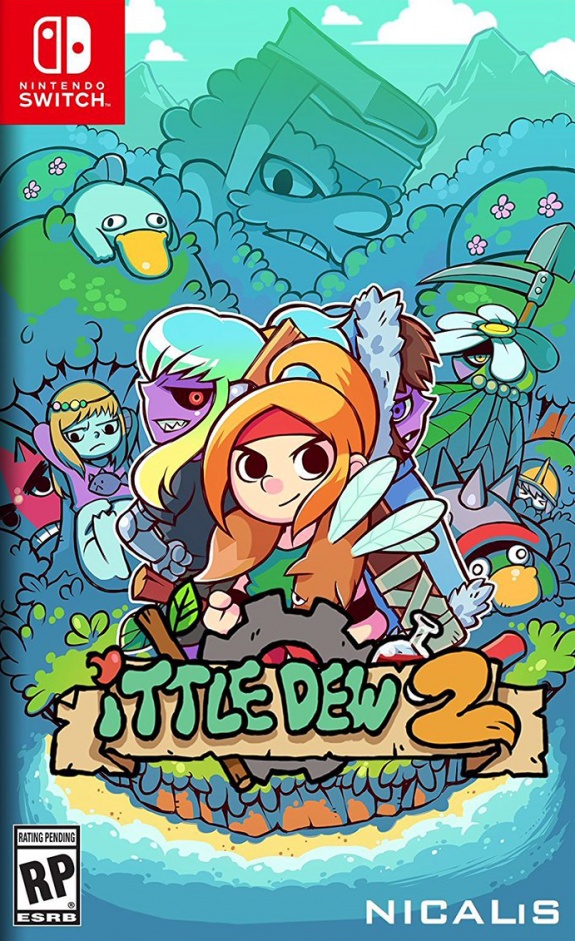 I have not played the first Ittle Dew game, so I don’t know how this one compares to that one, but there wasn’t any point where I felt like the gameplay suffered because I wasn’t familiar with the predecessor.  The games easy to pick up–all you can do at first is move and swing your weapon.  As you find additional items in dungeons then the gameplay gets more complicated as you figure out how to use those to solve puzzles.  It is very similar in style to the NES and SNES iterations of Legend of Zelda, with a broad overworld with dungeons, each of which has an item and a boss.  For those who don’t like open-ended exploring it is more directed than its source material in that the next “logical” dungeon for you to visit is marked on the map–so if you just want to power through it without broadly exploring, you certainly can.

The game eases you into the difficulty in that right at the beginning the enemies really don’t attack you and the puzzles are very tutorial level.  But the game does get genuinely difficult by the end both in puzzles and gameplay.  One aspect I thought was really well done was that, although an immediate use of each item is immediately apparent, they generally have at least a handful of major ways in which each item can be used to help solve puzzles, and some of them are not obvious, you have to experiment, try to mix them, see what happens.  I’m not sure I’ve even figured out all the permutations of the items, because there are some puzzles I haven’t solved and I feel like I’m missing something even though I’ve gotten the major items at least.

This game was a lot of fun, especially if you already know you like Zelda-like games, it’s well worth your time.

Audio
Fine, though I often played with the sound off.

Challenge
Later levels of the game, particularly the boss battles, and some of the later puzzles, are very challenging and often took me several tries.  Some of the optional areas of the game like the dream dungeons I haven’t completed because the puzzles there are quite challenging–there are quite a few ways to use each tool you find on the way that aren’t immediately obvious, so it takes quite a bit of experimentation to figure these out.

Story
Slight, but fun.  It’s a game that’s clearly designed for people who have played a ton of Zelda-like games before, so they have fun playing with the tropes and poking fun at some of the sillier ones.

Session Time
As with all Switch games, you can put the console to sleep at will, so that makes it easy to pick up or put down at a moment’s notice.

Playability
Not hard to pick up, the controls expand as you gain more items to use.  Some of the later puzzles are in part challenging because it’s not obvious all the different possible uses of a power.

Replayability
There are optional dungeons and a whole set of dungeons in the dream land that are particularly challenging because you can only use one item in each of them, along with collectibles like extra hearts there’s plenty for extra play-throughs.

Originality
It is intended as a parody of the popular Zelda series, especially the ones from SNES and earlier with the 3/4 overhead view, so it’s not a game whose popularity is based on its uniqueness.  But it takes those familiar elements and does some fun new things with it.

Playtime
The Switch says that I played this for 10 hours, which has been mostly focused on the standard dungeons.  There is certainly a lot more to explore that I haven’t touched.

Overall
If you like real-time fighting and puzzle games, you’ll enjoy this.  If you’re a fan of the Legend of Zelda series, even more so, since you’ll get the references.  Fun, and the later puzzles and boss battles are challenging even for an experienced gamer.  $30 on the Nintendo site if you want to play it on Switch.  Ittle Dew 2 (without the plus) is available on Steam for $20, I think that does not include some of the extra dungeons and etc.