Example:
This. She didn’t mean to. It was a mistake.

Example:
Time to get up. You arise from the bed, drifting, almost floating, toes straining down to reach the ground, arms flailing a bit for balance, before you thump-settle back into place.

Shake your head. Yes, that was odd. Still, you’ve forgotten about it by the time you’re dressed. Just one of those things.

(v) To be in the right and proper place, to fit in.

Example:
This is your home. Obviously. You feel it in your feet, the way they settle on the floor when you get out of bed. Just so. You feel it in the air. You crack your neck and stretch and just know. That’s how it is.

(n) A disguise to help someone or something blend in, a way to pretend that you belong.

Example:
The landscape shifts constantly, adjusting. For you. It’s subtle — a tree moves here, a car is further down the street and a different color there, and the sky is the exact shade you like just when you need it to be. You don’t notice it, consciously. You’re not meant to, after all. The back of your mind sees it, though, notices the effort, and relaxes. Yes. This is right. This is home. This is where you are meant to be.

There is a tiny part of you that thinks maybe the curtains should stay the same color, even if you do regret them two weeks after putting them up. That sometimes wonders, if just for a second, why the spice jars never run out of your favorite things and marvels at just how nice the neighbors are.

Example:
On a quiet city street, a man walks just in front of a woman, feet crunching in tandem on sidewalk snow. Suddenly, she speaks, her voice very clear in the cold morning air.

“Last night I dreamed I got pulled out to sea, and then there was a storm. I was trying to stay above water, but the storm was doing strange things to the waves. They started turning to glass and ice all around me — planed crystalline pieces splashing and curling up and crashing near me. It was beautiful, honestly. I felt so guilty, though. I couldn’t tell the difference between the glass and the ice, and so many things I touched were broken or melted as I scrambled to keep my head above water. I felt like I was breaking everything beautiful around me.”

He can’t help himself. He turns to the stranger in the blue peacoat behind him, who’s just shared this private little moment, and says, “You were only trying to stay alive.”

But now she’s moving past him, headphones on, looking down at the phone in her hand. The conversation wasn’t with him. “No, I woke up first. Sure. Sure. See you later.”

This is happening now.

(n) a tool for discovering meaning.

Example:
The truth points to itself.

1. (n) One who experiences a dreaming state, usually while asleep, moving through a world of ideas.
2. (n) One who yearns or wishes for something not in evidence.

Example:
“So, what do you think happens to the people in a dream?”

“I’m not, actually. And there’s nothing wrong with philosophy! I just… never mind. It’s stupid anyway.”

Example:
White sheets, shadows stretched across them, and a prone form in the bed. There are monitors, beeping. Clear plastic tubing runs down from an IV stand, is taped to a bruised hand. Her closed eyes are not moving. She is lonely. She will be gone, soon. And then?

(v) To lose memory of something.

Example:
Evidently there was an accident. It was nothing to do with you. Should I send another book? I am inclined towards apologies.

Example:
You are holding a leaf, turning it gently by the stem in the autumnal sunlight, watching the way the colors shift across its surface. Red. Orange. Green. Brown. There’s a whole year in your hand. You run a fingertip along each of the veins, being careful of the brittle edges, and then you place it — just so — back on the leaf pile where you found it.

The ground ripples as you walk away.

Example:
“Do you hear that?”

“Yeah. I thought I heard someone say ‘I just want to go home’ and then it started.”

“Did you leave the television on upstairs?”

“No, I’m sure I didn’t. I’ll go check, though. See if you can figure out where that’s coming from.”

“I can barely hear it now. What am I supposed to do, look under the couch and inside the fridge? There’d better not be anyone crying in there. Well now I can’t hear it at all. Hello? Are you coming back downstairs? Where’d you go?!”

Example:
You are all my muse. Exhale.

1. (v) To connect or link things together
2. (n) The seam or place where things come together

Example:
The handle of his favorite mug broke this morning when he grabbed it out of the kitchen cabinet. A handful of handle made him laugh a little, and now he sits at the kitchen table, superglue at hand, preparing to patch things up.

But first, he can’t help but touch the broken bit, exploring the gentle topography with his index finger. It reminds him of losing a tooth as a kid — it feels raw and exposed and he winces in sympathy, but still he probes the place which used to be whole, and now there’s a hole instead.

He’s surprised by the remnants of glue on the mug — how many times has this happened before? How could he not have noticed, or did he just forget? Surely it will be as good as new soon, though. Surely.

Example: How soon is soon?

Example:
“Are you all right? You need to lie down or something?”

“I can’t miss this connection.”

Example:
When you can’t sleep, and you’re staring at the ceiling in the dark, listening to all the little noises that seem so loud. You’re tired. You need to sleep. You know this. But you resist the temptation to check the time and roll over and try counting backwards, or maybe flexing your toes one at a time under the sheets, and feeling the thud of your heartbeat just so, interrupting your thoughts. Not that you’re thinking of anything. No. Just the sleep you need. Well, and maybe that thing you want to write, and now there’s a list of things half growing there in the space behind your eyes, disjoint and fragmented. If you manage to drift down into restlessness, the list will precipitate through your dreams, to-dos and phrases and fragments of numbered items settling in to the nonsense you think of as dreams, held together loosely by the tenuous threads of story your mind insists on imposing.

1. (adj) Having the interior accessible
2. (v) To cause to be receptive

Example:
“I can’t get this damned jar open.”

“I don’t know. Could be anything. Beets. Confetti. Time. The stuff you keep in jars, right?”

“The stuff you keep in jars maybe. Here, give it to me.”

“I really think we might have to break it. It’s so stuck.”

1. (n) A substance deposited from a solution.
2. (v) To cause something to happen.

She stands in a snowy field, trees stark inked lines on the horizon. She’s young, in a warm blue peacoat, too-big hat sliding down over her eyes. Her mittened hands turn upward to the sky, gathering snowflakes, and then she presses them together. A sheet of white paper shifts from between her fuzzy palms to the ground, compressed from the crystals falling from the sky, and she opens her hands to the heavens again. And again. And again. The pages accumulate around her legs, piling up, faint and shadowy words smearing the white as the light fades.

She finally turns to look at you, but you’re gone.

Example:
Something is behind you, something dark and dangerous. You dare not look back. The hallway stretches ahead and behind, shadowy, the walls turning in ways that don’t quite make sense, as you run. Your steps quicken, and you can hear, far away, something rhythmic and mechanical. You move toward the sound.

(n) No. I’ve been defining reality for too long. Look up ‘gentle’ instead. That’s a nice one.

The woman pushes the child toward the swimming pool. She takes two stumbling steps forward, bare feet on hot concrete, and then stops. The water shimmers, like glass, like ice. The orange waterwings are too tight on her arms, and there are too many people, and her tummy hurts, and it smells like chemicals and other people’s ambition. She turns and runs away through the crowd, past the too-long legs of her mother, back into the cool echoing darkness of the locker room. She just wants to get away. She isn’t watching her footing, on the water-slick tiles by the hard wooden benches and sharp metal lockers.

The world holds its breath.

(v) To be foundational, the cause of something.

Example:
It’s not a lie if it’s everywhere, if it’s underneath everything. Right? So why do I feel so guilty?

(n) One who sees more, though they may understand less.

Example:
The ladybug crawls along the back of your hand, having been liberated from the windowscreen. You’re looking closely at its spots, and the closer you look, the more there seems to be to see. Finally, you look away, half laughing. It almost felt as if something were looking back at you, from that infinite fractal regression of spots on spots on spots. You put the little insect outside, on a leaf.

Example:
“I’m sorry, but she’s never going to wake up. There’s nothing we can do.”

(n) A rock fragment differing in composition and origin from the rock or crystal enclosing it.

Example:
How did things get so strange? There aren’t enough books to make this right.

(pronoun) The person being addressed.

Example:
You never saw her. You were nearby — physically or conceptually — and were drawn in. You think this is about you, but that doesn’t make you vain. It has been. Mostly. About all of you. Go on now. Turn the page.

Author’s Note: I’ve always been a semi-lucid dreamer, exploring weird dream worlds half aware and with an overwhelming sense of responsibility for the things happening in the dream environments. I had a dream one night wherein I earnestly tried to apologize to everyone I met, but nobody ever quite understood what I was saying or why. I woke up thinking I needed a dictionary to apologize properly, sat on that idea for a few days, and wrote this story shortly after. 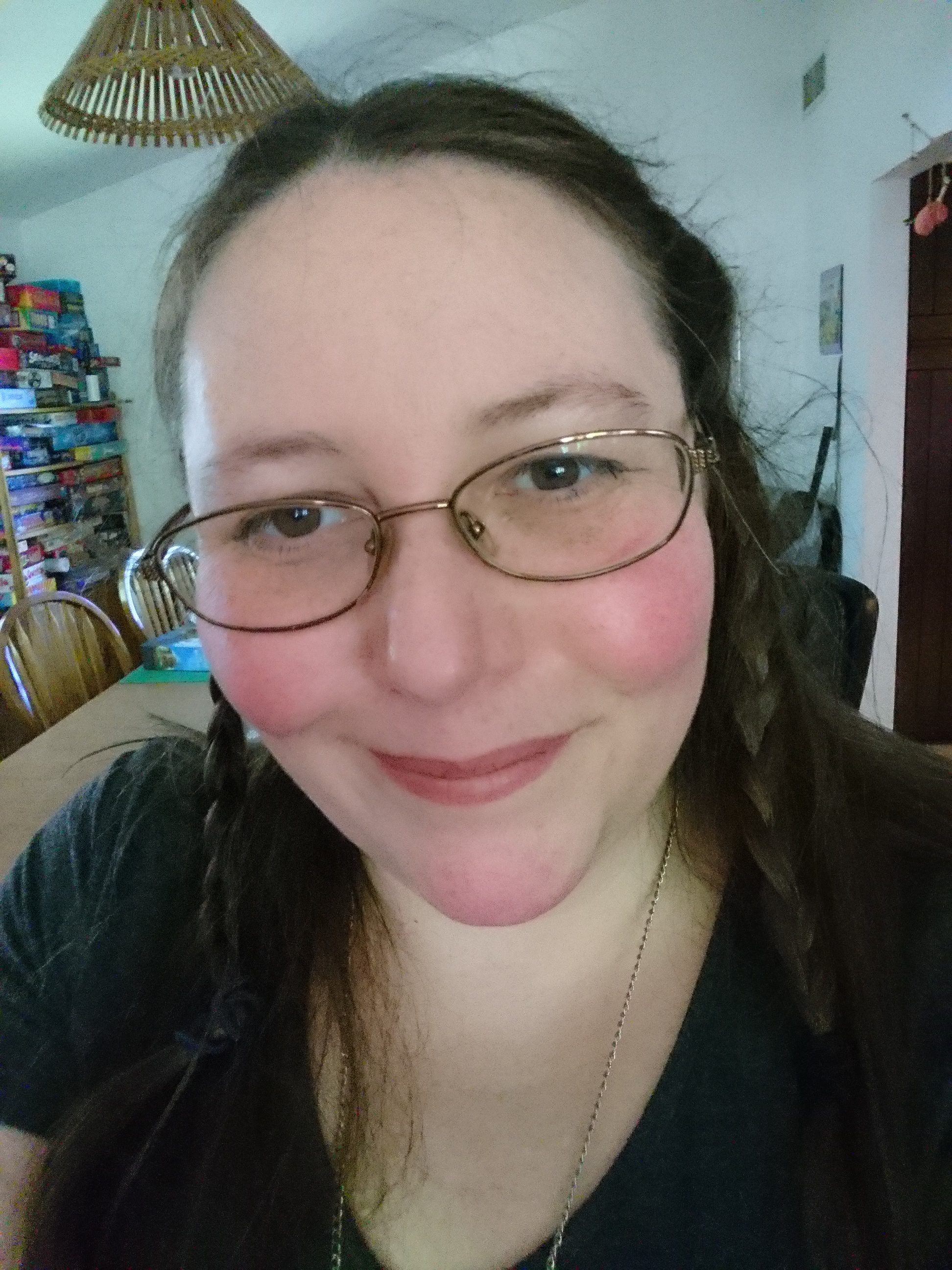 Cislyn Smith likes playing pretend, playing games, and playing with words.  She calls Madison, Wisconsin home where she enjoys the company of three cats, some humans, and an assortment of cool bacteria. She has been known to crochet tentacles, write stories and poems at odd hours, and gallivant. She is occasionally dismayed by the lack of secret passages in her house. Her poetry and fiction have appeared in The Best of Electric Velocipede, Strange horizons, Star*Line, Remixt Magazine, and Flash Fiction Online.