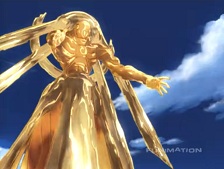 Fafner: Dead Aggressor is a series from ten years ago, and it shows in the character designs and the 4:3 aspect ratio of the original broadcast, but those do not detract from making it one of the more unusual mecha shows I’ve seen.

While Fafner starts with the usual teenage protagonists as the pilots, what draws me in is the attention paid to their parents, who are both their commanders and their support crew in the war that suddenly finds their figurative Eden.

Twenty-nine years ago, long enough that many of the younger adults were born post-crisis, an alien entity emerged and most of Japan was destroyed. But a small group of researchers hid on a mobile, artificial island with a cloaking device, taking their research with them.

There, they built weapons to fight the alien Festum and also raised children to pilot the special robots called Fafners, that are the only weapons powerful enough to routinely destroy them. The Fafners are named after the giant in Der Ring des Nibelungen who turned into a dragon to protect his treasure, and they are finicky things that will only accept pilots that meet certain genetic criteria.

Then as the pilot ages and their brains continue to mature, they lose the ability to sync with the machine (all controls are neural). Hence one of the best rationales I’ve seen for having teenage mecha pilots.

Most of their history is unknown to the teenagers, who grew up thinking that the rest of Japan still exists and that they simply live on one of the smaller islands. This is an intentional choice by their parents, who want the children to have as ordinary a childhood as possible. The adults work as shopkeepers, teachers, craftsmen, and so on until the day a Festum finally finds them, at which point it becomes apparent that all of the adults know the truth, even those that were born on the island and were former Fanfer pilot candidates themselves.

Once exposed again to the outside world, the island’s inhabitants are forced to deal not just with the Festum, but the rest of humanity that is still out there and has been searching for them for the last twenty-nine years in hopes the advanced technology the researchers fled with will save them.

Though the protagonists are essentially tools created for the day they might be needed, it’s clear that many of their parents love them regardless of the fact they were born to be the island’s primary line of defense. One of the most moving scenes is when Commander Makabe and Dr. Tomi go around to all the parents of the best pilot candidates (most of whom have second jobs as part of the island’s military command and support staff) and let them know their child is being conscripted.

How the parents react, even knowing this day could come, touches on emotions that most mecha anime never address. One of the fathers is a Fanfer mechanic, and there’s a short scene where he tells his wife he can’t put off work that evening because of their son (who will be going into battle soon).

The result is something quite unusual, as I can’t think of any other anime that spends so much time on family, whether its parents, children, or siblings. It does make the cast rather difficult to keep track of since there are several pilots and parents for almost every one of them, but I think the effort’s worth it, as every death (and there are several) means something to someone.

That said, Fafner: Dead Aggressor does not entirely come together. The alien Festum aren’t meant to be understandable, in fact the core of the problem is that neither humans nor Festum can abide each other’s existence, but even if their mind is alien, some things about their behavior just doesn’t make sense if examined too closely.

And if one hopes for an explanation for why a giant robot is the best weapon against alien invaders, there isn’t one. It is still a mecha series at heart.

The quality of the characters varies. Lead protagonist Kazuki isn’t bad per se, but he’s not very interesting. He’s the lens through which the audience views most of the show so he’s ignorant of everything and is a little idealistic, even when the audience knows what he wants is a bad idea given the situation (granted, we’d have a less interesting show if Kazuki’s idealism didn’t keep causing trouble).

Some of the series’ most trying moments come when Kazuki decides to talk enemies into defeat, which can strain believability.

The rest of the cast has significantly less time, but enough to feel like individuals rather than cut-outs, which is an accomplishment, since there is only so much time the show can give any one character. Aside from Kazuki, the rest of the cast gets about the same amount of attention, including several of the adults, whether they are parents or previous Fafner candidates.

In a way that works since it’s harder to tell if someone is wearing plot armor and if they’re going to make it to the end of the series, but because of the greater distance between the audience and individual characters, it’s more that we feel for those who keep living than those who’ve been lost.

Even though Fafner isn’t perfect, it’s memorable for what it accomplishes, and putting a human face on war. While I initially thought it was naive for the adults to have worked so hard to maintain the illusion that the world outside still existed, by the end I understood. Fafner is a loss of innocence story for the pilots, but they are grateful they had the innocence to lose.

Pluses: teenage protagonists with parents just as invested in the fight as they are, more realistic treatment of the costs of war than most anime

Minuses: not much character depth, backstory reveal is on the slow side, sometimes the amount of information withheld from the protagonists doesn’t make sense

Fafner: Dead Aggressor is currently streaming both subbed and dubbed on Hulu. The subtitled version was watched for this review.