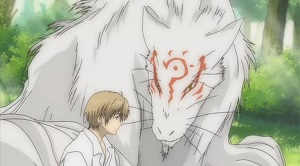 Takashi Natsume is an orphaned high school student who has bounced from relative to relative after the death of his parents, none of whom wanted much to do with the troubled child who kept insisting that he saw strange things and would unpredictably act out.

Though Takashi is actually a caring and sensitive person, he has the ability to see youkai (a broad term encompassing many kinds of creatures from Japanese folklore), which most people can’t. When he was younger he tried to explain to teachers and family members, that there were creepy monsters following him, hiding in corners, hovering outside the window, but no one believed him because they would look for themselves and see nothing.

Takashi has gone through life as “that strange kid” because he’s reacting to youkai that only he can see, and this is made clear in the opening scene of the show, where Takashi is running for his life and passes by two classmates who have no idea why he’s running like a madman, or why it’s so important that he finds the nearest shrine.

Most humans can’t see, hear, or touch youkai, and because of that their interaction with youkai tends to be minimal. But youkai take an interest in Takashi as soon as it becomes apparent that he can see them. For a human, he’s unusually spiritually powerful, to the point that he can sometimes pass for a youkai himself, and it seems to be an ability that runs in the family.

The home of his latest foster family is where his grandmother, Reiko, had grown up. Reiko was also incredibly powerful, and also ostracized by the people around her for seeing and interacting with things that weren’t there. Takashi had never met her since she had died young, but he soon learns from the local youkai that she left behind a collection of names called the Book of Friends.

Whoever holds the Book of Friends can command the youkai whose names are written in it, making it highly desirable for malevolent youkai and other youkai who simply want their names back.

The premise could easily have become an action series, but it’s not. Takashi likes his latest set of foster parents, who go out of their way to make him feel welcome, and the last thing he wants is to cause them any trouble. Because he knows from past experiences that most people can’t see youkai, he has never spoken about them to his new parents and tries hard to conceal their activity.

Much of the series’ tension comes from Takashi trying to balance his life with humans with his life that experiences the youkai world. He is sympathetic to the youkai who have had their names taken and because he is Reiko’s blood relative, he is able to tear out the pages and return the name of any bound youkai who comes before him.

Helping him with this is the amusingly named Nyanko-sensei (I’d approximate it as “kitty-sensei” in English), a powerful wolf-like youkai who was sealed inside the vessel of a calico beckoning cat. As a result, Nyanko-sensei usually looks like an extremely chubby cat, and has even acquired some feline behavior, though he can still take his larger wolf form when needed.

Nyanko-sensei knew Takashi’s grandmother Reiko and agrees to watch over Takashi as his bodyguard until Takashi dies, after which Nyanko-sensei will take what remains of the Book of Friends.

Natsume’s Book of Friends is largely episodic, though time clearly passes and we see the seasons change, covering roughly a year and a half of Takashi’s life, during which he makes friends among both humans and youkai. We see Takashi come out of the shell he’s built around himself from the time when people disliked him for being weird and he hated youkai for making him act out.

This lends the series a very slice of life feel to it, where life just happens to be populated with youkai. Even when there are moments of danger, it still feels like a fairly low-key show and action is never the point.

Instead we’re invited to share Takashi’s life with him for as long as the series lasts, and for those who can’t get enough, the manga is still running with a licensed English translation by Viz Media.

One of the things unusual about Natsume are his foster parents. Whereas it’s common in anime to have absentee/dead parents, Takashi’s foster parents are integral to the story, because of his deep need to protect the home he didn’t have when he was younger, so they’re in almost every episode and their caring for Takashi feels more real and genuine than most parents who do show up in anime.

I highly recommend Natsume’s Book of Friends to anyone interested in Japanese folklore or looking for something different from the usual anime fare. Most episodes are standalone with a few two-parters scattered throughout, so it makes for very leisurely viewing.

Pluses: how humans and youkai simultaneously exist together, relationship between Takashi and Nyanko-sensei, lots of warm fuzzy moments

Minuses: Nyanko-sensei is sometimes really incompetent otherwise the plot wouldn’t happen, less focus on the Book of Friends itself as the series gets further in

Natsume’s Book of Friends is currently streaming under its untranslated Japanese title as Natsume Yujin-cho (Seasons 1-3) and Natsume Yujin-cho Shi (Season 4) on Crunchyroll and is available subtitled. NIS America has released this on Blu-Ray/DVD in the US, though copies are getting harder to find now.