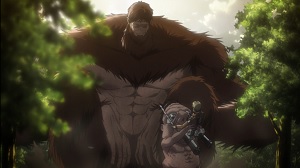 Attack on Titan‘s first season aired far enough back that I don’t have a review on Diabolical Plots to point newcomers to, but suffice to say it’s good! It crosses over to mainstream media much easier than most anime, but the story was clearly far from complete, which brings us to Season 2.

Be aware that there will be first season spoilers as I tackle the second season!

Attack on Titan took four years to return, which is surprising considering how popular it is. Part of the delay was no doubt because the first season had chewed through most of the available manga at the time it was animated, but considering that the second season is only covering one additional story arc, rather than two, I’m not sure why the studio waited so long. The manga has completed three more story arcs since the end of the first season, so from a storytelling standpoint, there’s a lot to work with.

After a brief recap, Season 2 picks up only moments after the end of the first season, with Annie being hauled away while encased in crystal and the Scout Regiment trying to figure out what to make of the mysterious Titan that appears to be inside one of the great walls that surrounds their country.

When a priest hurries over and tells Hange to cover the hole in the wall so the entombed Titan doesn’t wake up, it becomes clear that there are a lot of secrets to their world that some people are privileged to know and others are not. Worse, Titans have appeared inside the greater Wall Rose, which should not have happened unless the wall has been breached.

The Wall Rose invasion kicks off a furious first half of the season as the Scouts try to figure out where, or even if, the wall has been breached. The breach of the outermost Wall Maria at the start of the first season devastated the human population. Losing the middle Wall Rose as well would be a catastrophe.

Worse, there’s a new intelligent Titan involved and many of our fresh recruits have been isolated from most of the military. They are unarmed, without the maneuvering gear that allows them to sling themselves into the air to fight Titans, and they’re about to get surrounded.

After the gut-wrenching opening, the real story this season is figuring out who the enemy of humanity really is, because they are facing something much more complex than the mindless Titans outside the walls. At the end of the first season, Commander Erwin Smith had promised to flush out the Titans hiding among humanity, and in Season 2, he certainly delivers.

Arguably the biggest reveal happens at the season’s midpoint, capping off the manic first half, but the story doesn’t quite regain its footing afterwards.

Though a short breather is nice, the story loses momentum when it stretches past a single episode, which it does. The animators do their best to try to keep the episodes exciting when most of the plot involves people sitting around, but to be fair, they’re constrained by the fact the series has chosen to hew extremely close to the source material and there is a chapter where the characters literally spend the entire time sitting in trees. It wasn’t so noticeable in the manga, but the same chapter fares pretty badly in animation, even with a few additional scenes to break up the view.

Fortunately, Studio Wit knows how to sell a climax and the season swings back to full spectacle with a blood churning rally at the end. The season doesn’t end with many answers, but we do have a better picture of the enemy and even more questions for future story arcs.

Much has been made about the studio only animating half the episodes they did last time, especially since Season 2 started with enough source material to last in the ballpark of 35 episodes, but with the wonky exception of the Colossal Titan, which was clearly an out of place piece of CG, allowing the animation team to focus on a smaller set of episodes seems to have turned out to be a good thing.

Every episode is much more detailed and pleasing on the eyes than the first season, and the first was no slouch when it came to animation. There are fantastic sequences of running along walls, riding through murderous Titans, and soldiers flying through the air with their omni-directional mobility gear. Any random screenshot will have much better shading and line work.

Composer Hiroyuki Sawano returns as well with one of his best soundtracks to date, remixing themes from the first season and adding new favorites, whether it’s the heart-pumping “Barricades” or the thoughtful “Call of Silence.”

Despite the pacing stumble in the second half and the lack of answers, I still recommend Attack on Titan: Season 2 to anyone who enjoyed the first. It plays to the series’ strengths and then pushes itself to become even better at what it does best.

Best of all, on the heels of the season finale, Season 3 was announced for 2018, so there won’t be as long of a wait for the next round.

Pluses: Gorgeous and highly detailed battle sequences, midpoint plot reveal is a great twist, a lot of side characters from the first season really get a chance to shine

Minuses: A lot of first season questions are still unanswered, sitting in trees episode was unusually boring, pacing is off in second half

Attack on Titan Season 2 is currently streaming at Crunchyroll (subtitled), Funimation (dubbed), and aired on Cartoon Network. Funimation has licensed this for eventual retail distribution in the US.