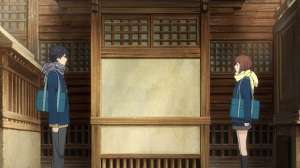 There were a couple times when I thought I was going to drop Blue Spring Ride just because it’s not quite my thing, but it’s managed to surprise me; probably because the relationship between Futaba and Kou continues to be rocky beyond the point it would be in most girls’ manga, and in that way, it’s more realistic.

In junior high Futaba and Kou were friends on the verge of something more. Just before the summer holiday Kou asked Futaba to go to the summer festival with him, and she agreed, but later that afternoon at school she made a comment about hating all boys in order to fend off unwanted advances. Kou overheard.

When the time came for them to meet at the festival, Kou never showed, and when summer break ended, Kou did not return to school. He had moved away.

Flash forward to the second year of high school and Futaba meets Kou again, but he’s a completely different person from before. He remembers her, his crush on her, and is happy that he was the exception to her hating boys, but has no interest in picking up the relationship because they’re both different people now.

For her part, Futaba tries to reconcile the Kou she knew with the one she sees now and is not sure she can fall in love with the new version of him, who is distant, inconsiderate, and just a bit mean. It’s a poignant epiphany that anyone who’s had a failed reconnect with an old friend can sympathize with.

While Blue Spring Ride has a lot of potentially romantic moments between Futuba and Kou, they are largely thwarted by the characters themselves rather than external influences, and the show revolves more around acceptance, whether it’s accepting one’s own self for who they are and accepting that there are some things you just can’t change.

Probably the biggest shock is that the expected romance does not happen, which I mention because on the surface this looks like a romance series, but it ends up being more about dealing with the loss and learning to move on. Though it has plenty of comedic moments (including one of the most hilarious instances of a girl accidentally crashing into a boy I’ve ever seen), the final couple episodes realistically show the toll that Kou and his family have paid.

He’s gone through a rough time in the years he’s been away and Kou isn’t about to open up to anyone about them. Against conventional storytelling, Futaba is not the magical girl that he suddenly can speak to either. She eventually comes to realize that even though they have a shared past she has to accept that he’s not the same person he was.

I had a good time watching Blue Spring Ride, although it’s a little slow at the start. Kou is difficult to like at first and it’s not until more of his backstory shows up that he’s of much interest as a male lead. The supporting cast takes a while to assemble since Futuba is coming off a failed reset of her social life since starting high school. Once everyone’s there the show is much more interesting.

Pluses: Futuba is very likeable and relatable female lead, realistic depiction of how complicated relationships of any kind are, nice balance between comedy and drama

Minuses: Pacing is slow in early episodes, Kou is initially difficult to like, romance fans may be disappointed that Kou and Futaba are not a couple in the end

Blue Spring Ride is currently streaming at Crunchyroll and is available subtitled. Sentai Filmworks has licensed this for eventual retail distribution in the US.