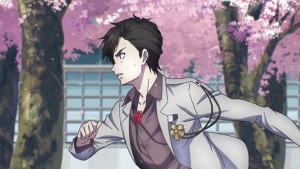 What if your reality isn’t real? It should be, but you start to notice things that don’t make sense and you can’t ignore it.

That’s the situation that Ritsu Shikishima finds himself in when he hears an odd voice through his phone, and discovers the class representative for the graduating third year students is the exact same person as the class representative for the incoming first years. And he’s not the only one to find something amiss. His classmate Mifue comes home and discovers her mom has become a literally different person overnight, with a different appearance and personality.

As reality breaks down for a number of students, they quickly discover that the world they live in isn’t real. It was supposed to be a virtual utopia for people who were in pain in the real world, but now they’re trapped with no idea how they got there or who they were before.

Caligula is based on the JRPG The Caligula Effect, so there’s an expectation that lot of story would be condensed to fit a 20-30 hour game into 6 hours of TV runtime. I haven’t played the game myself so I can’t speak to how well the condensation was executed, but it’s clear that the script writers made significant changes, which is unusual for an RPG adaptation. They’re extensive enough that if you didn’t know it was based off a game, you probably wouldn’t realize it due to how much of the focus is taken off of Ritsu and how late he and most of the cast come into their powers.

When you compare this to something like the currently running Persona 5 adaptation, it’s quite a difference. In games, the main protagonist needs to awaken to their power early, usually within the first few minutes, maybe the first hour if the game is particularly exposition heavy. This is so the player can start playing.

Caligula the anime up-ends that with Ritsu being one of the last to come into his own and removing virtually anything that might be construed as running a dungeon. The process of gradually recruiting each party member one by one is gone in favor of characters coming together in smaller, separate groups first, before everyone finally bands together halfway through the series.

Perhaps because Caligula is not one of the more visible JRPG properties, the anime staff was allowed the freedom to attempt an adaptation that is better for the medium of a TV show rather than a blow by blow recreation of the game. Unfortunately, while that does a lot to transport the concept of the game into a weekly TV series, it doesn’t quite make the series itself a good one.

Caligula does a fair enough job laying out the majority of the ensemble cast in the early episodes, but there isn’t the time to delve into everybody’s backstories let alone those of the series’ antagonists. While our heroes are people who want to know who they were even if it means reopening old wounds, there are a number of people who have no desire to return to their own painful histories. With nine protagonists, six antagonists, and twelve half hour episodes there just isn’t time to give more than the slightest brush to anyone aside from Ritsu, and only because as the lead protagonist he is the key to everything.

There is one episode unfortunately late in the series that is literally a “sit down and let’s introduce ourselves” episode because the characters realize they barely know each other.

There are things Caligula does really well though, like the initial mystery of what’s going on, and I like that the characters’ virtual selves aren’t always a one-to-one match with who they are in the real world. The virtual world of Mobius was designed to make people happy, so things that they found unsatisfying about themselves or the world around them could be changed. Someone who was the butt end of jokes could be the most popular guy around. Someone who hated being short could be tall. Someone who wasn’t talented would find themselves incredibly skilled.

These changes also extend to appearances, with at least one character choosing a different gender, though it’s unfortunate that the revelation is compounded with disgust due to everything else going on in that scene, and it’s not clear whether the character’s choice was out of gender dysphoria or a less complicated desire to look different.

But for a series where people unlock special powers within themselves when they determine they are willing to escape their fake reality, the powers themselves are given short shrift. Presumably there is a reason why the Catharsis Effect manifests differently in each character (probably tied to their individual hang-ups), but we don’t know for sure, and there aren’t many opportunities for the team to show off how they work in combat. Those that do exist aren’t exciting to look at either.

The ending almost pulls the whole mess back together again with a pretty nifty revelation about Ritsu, but given how much the series had tanked in the second half leading up to the finale, it’s not enough to save it and the epilogue moments didn’t feel entirely earned, though they were otherwise effective.

If anything comes out of this mess, it’s that the anime was released in time to promote the Japanese release of The Caligula Effect remake, The Caligula Effect: Overdose, which is supposed to fix a lot of the gameplay issues as well as provide the ability to play as a female protagonist. Overdose has been picked up for a Western release in 2019, and thanks to the anime, I’m interested in picking it up now. And in that sense, the anime did its job.

Pluses: Interesting premise, wide variation between who a person was in real life versus the virtual world (not everyone is actually a teenager), not afraid to deviate from the game

Minuses: Pacing is terrible, no one gets enough character development, for an anime involving special combat abilities they’re rarely exercised

One thought on “Anime Review: Caligula”