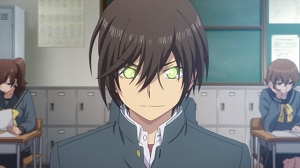 Charlotte has been my must-see series this past summer. The title is deceptively plain to the English-speaking ear, but hides one of the most emotional series about people with special powers that I’ve ever seen.

Charlotte reunites the production team behind Angel Beats, specifically writer/composer Jun Maeda, character designer Na-Ga, and animation studio P.A. Works. If you like one, there’s a good chance you’ll like the other and Maeda’s unique stamp as a writer is all over both works.

The humor is quirky, the characters are flawed, the audience has no idea where the story is ultimately going, but somewhere along the way it makes you cry, and multiple times at that. It’s actually rather hard to talk about why I like Charlotte so much without going into spoilers, and that goes doubly hard because if I hadn’t known this was a Jun Maeda series I probably wouldn’t have watched it.

Charlotte starts off simply enough. Towards the end of middle school Yu Otosaka discovers he has the ability to look at someone and possess their body for a period of five seconds (during which his own lies comatose). Being a middle schooler, he abuses this in expected middle school fashion; checking out girls’ bodies, using someone else to punch out someone he doesn’t like, and cheating on tests by possessing all the smart kids during exams to read their answers before going back to his own body.

Thanks to his power, Yu manages to cheat his is way into a prestigious high school where he’s the #1 student and manages to get the #2 to become his girlfriend by saving her life (when he used his power to set up the chain of events that put her life in danger in the first place).

First episode Yu is a colossally selfish jerk, until two things happen. 1) He’s captured by other teenagers who have special powers like him and 2) we learn that above all else he really cares for his younger sister, Ayumi.

In Charlotte some people secretly come into special powers during adolescence, and these powers stay with them for a few years before vanishing during adulthood, but their powers tend to be haphazard and not necessarily along the lines of what we would consider amazing. Yu’s possession only lasts five seconds. Tomori can turn invisible, but only to one person at a time. Takajo can accelerate to super speed without a similar ability to decelerate (and yes, that’s painful).

Tomori has Yu forcibly transferred to a special school for students with powers, or who could potentially have powers, where they can be safe from government scientists who would otherwise experiment on them. Ayumi, is also transferred to the adjoining middle school.

From there, Charlotte embarks on a string of power-of-the-week episodes where they find someone with a new power and then bring them under control either through transferring or getting them to stop. Though frequently funny, these are arguably the weakest episodes, even though the show is also laying groundwork for important revelations later.

Episode 6 is really where the show takes off and the stakes get personal, and by the time the show is in its final arc it’s flying like a bullet.

In a way that’s a little jarring, since it outwardly looks like the main cast is Yu, Tomori, Takajo, Yusa/Misa, and Ayumi, but Takajo and Yusa/Misa largely fade into the background in the second half and aren’t given much depth beyond their initial impressions.

The story of Charlotte revolves family, both conventional and non. Sure, it’s set in high school around kids with powers, but the questions it asks are more like “What would you do for your family? Would would you do if you lost them? What would you do to save them?”

Though there are few parental figures involved, all siblings in the story are ferociously devoted to each other, even if there are times that they exasperate each other. Nearly every major character has at least one sibling and unlike most narratives where they would be window dressing, Charlotte makes the audience understand and care for them like the main characters do.

Maeda’s writing takes full advantage of this as the story runs into its second half and explores what the characters have done and are willing to do for the ones they care about.

The ending is a bit odd as it runs away from some of the series’ strongest material and I’m not sure I’m entirely satisfied with it, but it does wrap everything up so there are no remaining plot threads. Mostly, it feels a shade too simplistic, possibly even too easy considering the magnitude of what Yu tries to do. It doesn’t feel rushed, but at the same time it would have been possible to take the last episode and spin it out into two or three. There was more than enough material and potential complications to comfortably do that.

I would still recommend Charlotte, because it has some very inspired and genuinely funny moments, but the ending is more of a faceplant than the spectacular send-off that I had been hoping for.

Pluses: interesting premise with half-baked superpowers, lots of laughs, good at pulling on the heartstrings

Minuses: ending is emotionally weak, takes a few episodes for the real story to come out, Yusa/Misa and Takajo fade from the story in later episodes

Charlotte is currently streaming at Crunchyroll and is available subtitled. Aniplex has licensed this for eventual retail distribution in the US.