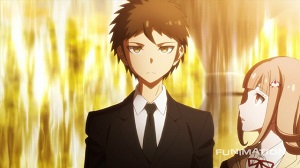 Danganronpa 3: The End of Hope’s Peak Academy assumes familiarity with both with the original Danganronpa and Danganronpa 2 video games (the latter of which was never animated).

Because of this, this review will also assume familiarity with the franchise. Watching either Danganronpa 3 arc will be very difficult for the uninitiated, even if they’ve seen the first Danganronpa anime, and the Despair Arc in particular puts a large amount of focus on the cast of Danganronpa 2.

Despair Arc begins sometime in the middle of Class 77’s first year at Hope’s Peak Academy. This means that they have yet to meet Junko Enoshima (who will be in Class 78) and we get a chance to see them in their pre-corrupted personalities.

This arc unfortunately starts slow and the early episodes consist mostly of shenanigans that could only happen in such a wacky school for the supremely talented. If anything, Despair feels oddly constrained by events that have to happen to maintain continuity with the games’ backstories and to plug in gaps with Future Arc.

Though the initial focus is on Class 77 and the first episode makes it look like Despair is their story, the various classmates aren’t treated equally, and most of them don’t get much in the way of character development. Occasionally they disappear from an episode almost entirely. One of the most devastating events of their high school life that isn’t directly tied to the main plot (the Twilight Murder Syndrome story) is built up in a single episode following the POV of a character who wasn’t even involved, and then wrapped up off camera.

My two biggest issues with the Despair Arc are the lack of a cohesive story and the pacing, which likely stems from trying to fulfill too many functions.

Despair is not just the story of Class 77’s fall from grace. It’s also the story of the corruption of Hope’s Peak Academy and the Izuru Kamikura Project. And it’s the story of Junko Enoshima’s preparation for the most despair-inducing tragedy the world has ever seen. Though they all eventually get tied together because of Junko’s meddling there is no central cast to root for.

We’re essentially following the POVs of five groups of people (Class 77, Junko and Mukuro, Izuru/Hajime, Munakata and friends, and Principal Kirigiri’s group) for a total of 24 recurring characters who don’t always have much to do with each other. That’s a tall order for a 12 episode series that is also trying to fill in backstory for the Future Arc.

The second half of Despair ends up in a terrible hurry to get everything to happen and it’s unfortunate that in most cases, it falls on its face and the corruption of the Danganronpa 2 cast, which should have been the highlight of the prequel, ends up being the biggest letdown.

Junko certainly has some wicked moments that showcase just how devious she is, but she doesn’t quite reach the horrid peaks she had been built up to be in the game, the kind who can convince hundreds of people to kill themselves through sheer force of personality.

I suspect that Future Arc was scripted first and the reason for the odd pacing in Despair was to make sure that when something meaningful happened in Future there was a corresponding episode in Despair to expound upon it. Three of the Danganronpa 3 exclusive characters show up in just one episode of Despair and never return again, making their appearance a narrative anomaly. That episode was unsurprisingly sandwiched between two Future episodes that dealt with the conflict between the three.

Other parts of the series such as the student council killing game felt oddly done. We knew it needed to happen because it was mentioned in Danganronpa 2, but it didn’t feel like it happened naturally (though once underway it is incredibly gut-twisting and violent in a way that Danganronpa rarely is, because for once the brutality isn’t stylized).

Unlike the Future Arc I don’t think it’s possible to watch Despair as a stand alone. As a prequel it relies heavily on the audience being familiar with the cast, and Danganronpa 3 original characters sometimes pop in and out without much context. While Future viewers can appreciate them, they’re given little to no introduction for someone only watching Despair.

Even as a companion piece though, I find Despair difficult to recommend due to retcons and what may have been impossible to fulfill expectations. It has its moments, and the backstory for the Future Arc characters helps, but it doesn’t come together or offer nearly enough cohesion to be its own entity.

Episode 12 by the Funimation count is the Hope Arc, which closes off both the Future and Despair arcs and should only be watched after the end of Future. As far as Despair is concerned it’s more of an epilogue, since the story proper ends at 11.

Pluses: one more chance to spend time with old friends, Izuru’s motivation in Danganronpa 2 fleshed out

Minuses: more of a series of events than a plot, corruption of Class 77 handled poorly, divided focus between too many POVs