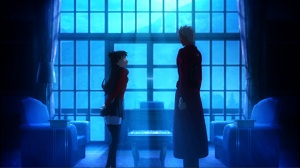 In the world of the Fate series, there is a tournament held every few decades where seven Masters summon seven Servants and battle to obtain the Holy Grail, which will grant the winners a wish. The Masters are all supposed to be powerful wizards in the present day world, and the Servants are legendary heroes from across time. Each Master and Servant pair work as a team towards their goal and each of them will get their own wish.

The battles don’t need to be to the death, but the only way to eliminate a Master from the tournament without killing them is to kill their Servant, but because the Servant is typically the more powerful of the two, killing the Master is considered easier.

The story revolves around Shirou Emiya, a teenager with some weak magus blood in him that by rights shouldn’t be enough for him to summon or sustain a Servant, but for reasons unknown he manages to summon a Saber-class Servant (considered the strongest one) completely on accident.

When his schoolmate Rin Tohsaka (also a magus) brings up him to speed on the purpose of the tournament, he decides to participate, because really, he doesn’t have much choice. Outsiders are supposed to be killed for witnessing any battles.

I suppose this is how magic stays hidden from the general population, though the series never comes out and says it. Considering the widespread destruction some of the battles cause I’m rather surprised magic has managed to stay hidden at all.

Though well-intentioned, Shirou tends to come off as a bit of a chauvinistic moron. Saber is clearly capable of fighting. The fact she is a Servant means that she was one of the greatest warriors of myth and legend, but he spends a lot of time trying to protect her and Rin (who is a much more powerful magus than he is), even when it doesn’t make sense and results in him just getting the way.

Shirou is the kind of guy who will throw his life away because he thinks it’s important to have made the gesture. It’s sort of a headbanger how idealistic he is, but instead of being endearing it just makes him look stupid.

But even if Shirou’s characterization is its weakest component, and the storyline itself sometimes stretches the bounds of believability, Unlimited Blade Works shines when it comes to its battle scenes, which are gorgeous. Clearly all the attention went to giving the audience a spectacle to remember and the final battle in the last episode does not disappoint.

I admit I don’t quite understand why the Fate series is so popular considering that Fate/stay night is presumably the one that inspired them all, since it’s not all that strong and many times characters do not get a full story arc. I recognize that’s probably a holdover from the game, where some characters get more to do in one storyline than another because of player made decisions, but it doesn’t feel like even the main plot of UBW entirely comes together.

For instance, it’s not until episode 22 (of 24) that the real villain’s name is spoken for the first time. It’s not that it was supposed to be a secret, we’ve seen him lurking around since the first half of the show, but when it finally comes out, he’s not even on camera so if I hadn’t been browsing a wiki for more context I might not have even connected the two of them.

The series suffers a little bit from expecting the audience to already be familiar with the franchise, and to some degree that is probably not surprising. The Fate storyline of Fate/stay night was already animated back in 2006 and the prequel Fate/zero was animated in 2011, and Unlimited Blade Works itself had been done as a movie in 2010, but I still feel that as a storyline based on the original game that started it all, Unlimited Blade Works the TV series should have been understandable and self-contained on its own.

The plot does get more engaging overall in the second half though, because Shirou and Rin eventually start working together instead of passive-aggressively trying to keep each other out of the way, and because by then the other Masters have started falling. It’s clear who the frontrunners are for winning the Holy Grail, and it’s not them.

I do have to mention though that Fate/stay night is not kind to its female characters. There are some creepy male gaze scenes when Rin and Saber are captured at different points in the series and though both of them are portrayed early on as competent and fully capable of looking after themselves, their roles are vastly reduced in the final third while Shirou gets the opportunity to come into his own.

Overall I wouldn’t say Unlimited Blade Works is a bad series, but it’s not a particular good one either, and it’s most saved by its animation quality. I like Rin as a protagonist, and would have been much happier if the series had been following her story rather than Shirou’s. She has a much more realistic outlook than he does while still remaining a person with a good heart.

Minuses: treatment of female characters in the second half, plot doesn’t make a whole lot of sense, most characters aren’t well fleshed out

Fate/stay night: Unlimited Blade Works is currently streaming at Crunchyroll and Hulu and is available subtitled. Aniplex has licensed this for eventual retail distribution in the US.