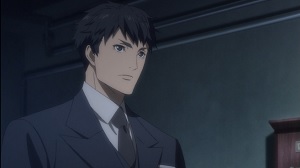 The story starts in 1937, in the midst of Japan’s invasion of China leading up to WW2. Lieutenant Colonel Yuuki has started up a specially trained spy organization known as D-Agency. The men who have graduated its rigorous training are regarded as both mavericks and monsters for adhering to tactics that the prevailing military thinking at the time regards as cowardly or even sacrilegious.

The opening two-parter is a delicious start, with conventionally trained Lieutenant Sakuma arriving as a military liaison between D-Agency and the Imperial Army. Sakuma quickly gets caught up in a cat and mouse game between D-Agency and his own superior that ends the first episode on a glorious cliffhanger with no obvious way out.

From there the series spins off into an anthology format, featuring a different spy each episode, with mixed results. For one, it really hurts to lose Sakuma’s outsider perspective. Since he’s not a spy, he doesn’t hide what he’s thinking and we get to follow along with his thought process. This doesn’t happen with the other characters, who are trained agents and reveal nothing more than their cover. The show plays its cards so close to its chest that sometimes it’s not possible to figure out what happened until the danger is over and it’s safe to debrief.

It makes sense, considering these men are working deep undercover rather than the more glamorous James Bond sort of agent, but it means that many times the viewer can’t put all the pieces of the story together until the last five minutes of the episode when the show reveals what we could not have known before.

On the one hand, it allows the spies to show their skills, and watching them is like seeing a magic trick without knowing how it’s done, but on the other, some things don’t make sense until context is given, and unlike magic tricks, we need the context to fully appreciate what happened.

I’d also argue that the two episodes following the opening two parter are among the weakest of the batch (though Hatano’s creativity in making an escape rivals Jason Bourne) since the spies involved are either dealing with temporary amnesia or primarily operating in the background, but there are some standouts in Episode 5 “Robinson” and Episode 6 “Asia Express.”

Each spy has his own strengths so the nature of their assignments results in a different feel for every episode. One episode might take place on an ocean liner in full sunlight. Another might happen mostly in an interrogation room after a spy’s identity has been compromised.

Now for the elephant in the room.

Joker Game takes place before or during WW2, depending on the episode, and from history, we know that Japan was among the aggressors. The show even opens with the Japanese populace celebrating the invasion of Qingdao.

The series combats approval of this history in two ways (in addition to a disclaimer that reminds audiences that this is a work of fiction). The first is the reminder of Japan being unprepared to deal with the western world, resulting in unequal treaties. Historically this was true and very much a legitimate concern, so it is understandable that Japan would want a spy agency to keep up with their western peers.

The second way is what makes D-Agency such a maverick in its time period.

Nationalism was high in WW2 and the military still adhered to a bushido-inspired code. But the two rules of D-Agency are: Don’t kill. Don’t die.

There is a good reason for this. Bodies bring up questions, and for a spy relying on discretion, they don’t want bodies to be found, whether it’s their own or an enemy’s. This code makes the spies of D-Agency more sympathetic because they aren’t killers, but runs counter to common military thinking of the time, which favors a more direct approach. Lt. Col. Yuuki finds the Imperial Army’s thinking to be backwards and even foolish as he and his team work to outwit all comers.

It’s also clear that D-Agency does not entirely trust Germany, since one spy expresses surprise at the side of the war his country has chosen, and another spy operates in Germany even after the war begins and the two countries are supposed to be allies.

If you can buy into a spy agency that is loyal to its country, if not what its country is fighting for, Joker Game is worth a shot. The obligatory Shanghai episode (Japan occupied it throughout the war) was a potential for the show to go very, very wrong, but did not end up offending me, and put a spotlight on military corruption in the city.

Though there is some spy versus spy involving the Allied powers, the show is careful to keep the conflict a human one (or to make the Allied spy such a bastard even his allies wouldn’t like him) so there are no hard feelings at the end of the episode. None of the spies ever deliver a smoking gun that could be tied to a historical offensive, so they can remain the good guys, rooting out corruption, traitors, and other spies.

One point that I would like to raise separately from the quality of the show is that D-Agency is composed entirely of men, and women only play bit parts in the series. While I’m sure the Imperial Army wasn’t about to start drafting women, D-Agency revels in the creative and unorthodox, so it seems odd that Yuuki would not have recruited at least one, especially since historically Japan did have a female spy in WW2, Yoshiko Kawashima.

Yuuki explains his reason for not doing this in the final episode, but quite frankly his reasoning is a load of horse pucky and applies to both genders, as is quite apparent in the context of the conversation.

It may have been difficult to arrange for a single Japanese woman living abroad given the time period, but D-Agency clearly works within Japan as well as without, and there’s no shortage of opportunities for a woman to do spywork domestically. Yuuki is already aware that some women are perfectly capable of seeing through the blind spots even the military men miss. It’s a shame he doesn’t capitalize on that.

Pluses: characters are extremely smart and believable about their spywork, seldom explored perspective from a contentious time period, writers clearly did their homework

Minuses: spies get minimal screentime in some episodes (they might not even be the POV character), frequently not possible to understand the full situation until the end of the episode, not possible to get attached to the cast since they’re constantly rotating

Joker Game is currently streaming at Crunchyroll and is available subtitled.