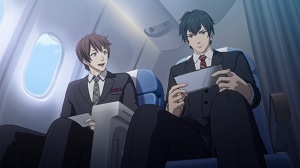 KADO: The Right Answer is an usual piece of science fiction for anime to tackle. While first contact scenarios are about as common in anime as in Western movies, they are usually played for action (when the aliens are hostile) or comedy (when the aliens are not). KADO chooses to begin with an alien whose motivations are obscure by our understanding.

Yaha-kui zaShunina arrives in a giant extra-dimensional cube that lands on top of a passenger plane, accidentally absorbing it and all the people inside. Fortunately, one of those on board is ace government negotiator Kojiro Shindo. When the alien entity does not appear to be immediately hostile and goes to the effort of absorbing the the concept of human language, the two of them begin to communicate.

zaShunina offers humanity a means of advancement, with technology far above what is currently available. We’re not talking spaceships, but an unlimited energy source for humans to do with what they will. He (zaShunina takes on a male appearance but probably does not actually have a gender) likens his offer to a person who has so much of something they no longer have need of it all. If he has more bread than he can possibly eat, why not share it? This is why he has come to give gifts to humanity.

It’s a completely reasonable line of thinking, but naturally wreaks havoc across Japan (where zaShunina landed) and the rest of the globe as it will completely revolutionize industry.

Much of the series deals with how deal with zaShunina’s gifts (because he doesn’t stop at unlimited energy) from the point of view of nations and individuals. It’s not an action-based series and all the human characters are adults, though one scientist is childlike to the point of annoyance, but her mentality works for the story so I’m a little more forgiving than I would otherwise be. People are rightfully concerned about what zaShunina will mean for humanity and whether humans are moving forward too fast.

For the most part the early conflicts move well, featuring reasonable and restrained responses that we hope would be mirrored should any such event happen in the real world.

Shindo is the lead protagonist, but it’s difficult to see inside his thoughts and know him as a person, which is likely why Episode 0 exists. Because he agrees to represent zaShunina in discussions early on, so the anisotropic being has a human representative, he ends up cut off from a lot of the cast. zaShunina also does not fully understand how humans work, so a lot of Shindo’s interactions with him don’t really show him as a person so much as an aide.

This changes later on due to the influence of Saraka Tsukai, another negotiator, who is the designated representative of the Japanese government. While most people are intrigued by the possibilities zaShunina brings them, Tsukai tends to be the one voicing the counterargument, that perhaps it’s best if humanity continues to struggle and advance based on its own labor rather than what an alien being has given them.

KADO: The Right Answer is largely a thoughtful piece, exploring the ramifications of human advancement through alien intervention, and expresses numerous points of view. This is the nice thing about it. We see the cautious and the eager. About the only thing we don’t see are bands of crazy protesters, but barring a few outside shots the story takes place in Japan so it’s possible that this may be more of a cultural difference.

Where it begins to fall apart is towards the end. We know the story can’t just be about zaShunina bringing gifts to everyone, so something happens to raise the stakes, and what happens feels contradictory to the tone laid by previous episodes. The resolution itself is a bit of headscratcher. There’s a small part of it that works, but the rest involves a pretty hefty sacrifice from a couple people that isn’t really discussed before it happened, so it doesn’t feel as polished as it could have been.

KADO is also one of a growing number of CG-animated anime. For budget reasons, CG is getting more popular, but still has difficulty recreating the two dimensional look of traditional hand drawn animation. KADO handles itself fairly well, and the CG is handy for a project like this where there are a lot of alien artifacts that need to look unusual and outside of our reality. The human characters are rendered pretty well too. Though they are clearly computer generated rather than hand drawn, they’re one of the better efforts in recent years.

Overall, I think KADO is a worthwhile experiment. It doesn’t hit the heights it could have, but it’s a worth a look.

Minuses: negotiation theme ultimately has no impact on the ending, ending requires huge sacrifices that don’t have much setup, pacing is really slow

KADO: The Right Answer is currently streaming at Crunchyroll (subtitled), Funimation (dubbed). Funimation has licensed this for eventual retail distribution in the US.