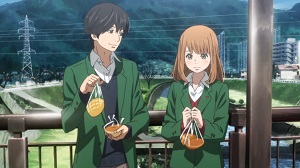 Orange is a romance/high school drama with a speculative twist. Sixteen-year-old Naho Takamiya discovers a letter from herself from ten years into that future that tells her to watch for a new transfer student, Kakeru Naruse, who will become one of her friends. Though happiness has not eluded future Naho, she has many regrets over things that she wishes her younger self had done differently.

As predicted, Kakeru joins her class that same day, and he’s quickly absorbed into Naho’s circle of friends (both male and female). Though she knows from her letter that Kakeru will not live to see the end of the school year, teenage Naho can’t help falling in love with him.

Orange at its best can be an emotional watch, not because we know that Kakeru does not exist ten years from now, but because his death didn’t have to happen, and we get a front row seat to all the missed moments that future Naho hopes to change to make a better future.

The bulk of the series takes place during Naho’s high school years, but there are periodic flash forwards that show future Naho and her high school friends ten years later, and the events that lead up to why she decides to send the letter.

Each episode the story weaves in what is currently happening to teenage Naho with adult Naho’s regrets and advice, and the combination works extremely well even when events begin to diverge. We know that teenage Naho keeps a diary, so it is not out of the question that the highly detailed letter from her future self is possible (getting events down to the day) because she was probably cross-referencing her diary when she sent it.

Interestingly, knowledge of the future doesn’t mean that Naho has an easy ability to change the past. Though teenage Naho changes small things early on, such as getting the nerve to participate as a pinch hitter for her friends’ softball team, she is still herself, with all the insecurities that come with being an introverted high school girl. Even with the prodding of her future self, she can’t always break free of her innate personality, and it’s clear that she’s trying the best she can.

Having been a painfully shy teenage girl, I completely understand that, and we see the younger Naho make mistakes that would be easily solvable by someone with a more aggressive personality, but that’s not her. Future Naho can tell her younger self to do things all she wants, but everything is easier in hindsight.

As for Kakeru, whose life and death is what sets this whole thing in motion, he’s his own character and not an idealized love interest. His story is woven, bit by bit into each episode, and not in a necessarily getting to know a person sort of way. A fair bit of the information comes from the future and those who’ve gathered to celebrate his birthday ten years after his passing. (I have to wonder if this is a Japanese thing, because this is not the first anime I’ve seen where friends gather for the birthday of a lost friend.)

Kakeru isn’t perfect and like Naho, feels a lot like a person we could have been or could have known in high school. He integrates well with Naho and her friends, and makes dumb mistakes like dating a girl he’s not really into just because she has a cute face. Among his more blockhead moments is being surprised that Naho would stop calling him in the morning to wake him up after he gets a girlfriend.

But Kakeru remains highly sympathetic, as the series readily shows us that people make mistakes, even when they have the best of intentions, and Kakeru is carrying a difficult weight that we don’t discover until well into the series.

The future Naho knows she can’t change her own past, and it’s made clear that Orange subscribes to the multiverse form of time travel, where changes made in the past simply spin off a different timeline. I don’t think her adult self is entirely unhappy in her present either, having started a family with Suwa, one of her other high school friends, but knowing that she could have changed things for the better makes it worth sending the letter even if she will never see the results of her work.

I enjoyed having the older versions of the characters around, as it’s possible to see how they’ve changed over the years. No one is unrecognizable, but they really do feel like older, more mature versions of their high school selves.

It’s also worth addressing potential concerns about Naho’s friend Suwa, who becomes her husband in the future, since he’s a key character in the present. It is tempting to think that Naho would rather have married Kakeru if he had lived, and that’s why she sent the letter, but it’s made clear that she deeply cares for Suwa, as her letter takes pains to ask her younger self to notice what Suwa does for her, and to not take him for granted.

Orange sags a little in its second half. Part of this is because it becomes increasingly obvious that Naho cannot tackle the goal of saving Kakeru by herself, but also because the show starts to worry about just how the letter got back to the past when it was better left unsaid. Though a speculative series by nature, Orange tries too hard to explain how the time travel could have happened at a time when the audience is already invested and doesn’t care.

Despite those stumbles, the show pulls itself together for a tearjerker of an ending that feels satisfying for the efforts of both Nahos. Tissues recommended.

Pluses: Realistic depiction of depression, characters that feel like people we were or knew in high school without being stereotypes, how present and future stories are woven together

Minuses: Second half’s plot revelations seem a little contrived, some questionable decision making by characters (though generally forgivable due to their ages), doesn’t really address what life will be like post-ending

Orange is currently streaming at Crunchyroll and is available subtitled. Crunchyroll has licensed this for eventual retail distribution in the US.