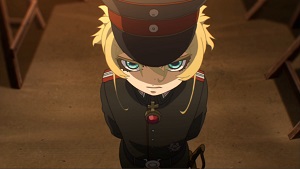 Saga of Tanya the Evil is one of the best military-oriented anime series I’ve watched. While a lot of shows feature characters who are part of a military unit and involve war-related storylines, Tanya the Evil is particularly well suited to military enthusiasts, the kind willing to argue whether the Schlieffen Plan actually could have worked.

That’s not to say that lay people can’t enjoy Saga of Tanya the Evil on it’s own, it’s fantastic watching our jerk protagonist scrabble out of situations that progressively get from bad to worse, but military history buffs will get an extra kick out of the show from its pseudo-historical setting and frequent basis in historical tactics and battles.

Though it’s not billed as such, Saga of Tanya the Evil can be considered an exercise of what would happen if someone with the knowledge of historical wars went back to the time they were actually fought.

This is where Tanya comes in.

Tanya was originally a male middle manager of a presumably large corporation in our world, but being a ruthlessly pragmatic sort of person, he lays off a mentally unstable employee (for understandable reasons) without displaying an ounce of sympathy. That former employee repays him by pushing him into the path of an oncoming train.

Right before the moment death, a higher power freezes time to speak to him about faith. The soon-to-be Tanya however is unrepentant about his worldview and rejects the possibility of this entity being God, settling on calling it Being X. He even calls out Being X on being a poor deity if it can’t properly manage seven billion people the way it wants them to behave.

Being X decides to teach him a lesson and reincarnates him as an orphaned girl in another world on the brink of war, stripping him of his access to advanced science, his social position, and putting him into the worst straits possible on the chance that his faith might awaken when he has nothing else to rely on. But this time, if he dies, he will not have another chance at reincarnation.

Now Tanya Degruechaff, the former salaryman discovers that he has magical powers and will eventually conscripted into the army because of them. Given the inevitable war, he decides the best course of action is to voluntarily enlist, thus getting into an officer track, and eventually working his way up the career ladder to a comfortable rear echelon position. It’s not so much different from the corporate ladder, but a hell of a lot more dangerous.

This world is an alternate World War I with thinly renamed countries standing in for Germany, France, Scandinavia (they get amalgamated into one), etc. The world map is the same and the Republic (France) is currently locked into trench warfare with the Empire (Germany) along the Rhine, and making matters worse for the Empire, they are being hemmed in from the southeast by Dakia (which seems to be Bulgaria, which oddly was Germany’s ally in WWI) and from the north by the Northern Entente (Scandinavia).

The reason for the war starting is not disclosed, but the Empire is clearly on the back foot. And did I mention that Tanya is an Empire citizen?

Apparently age is no restriction for warfare in this world as only token protest is given to Tanya’s enlistment while she is clearly still a child, and after she proves herself a capable and outwardly fanatical commander she’s deployed and ordered about as any other officer.

The funny thing about watching Tanya is that she (and I’ll use she from now on since other characters don’t know her history) comes across as this incredibly patriotic and devout officer to her fellow soldiers, when she actually doesn’t give a crap. One of the few higher echelon officers aware of Tanya’s true disposition describes her as a monster in the body of a little girl, and that is fitting.

Tanya is not nice. Tanya primarily cares about ending the war for her own personal security and isn’t afraid to manipulate rules and laws to get things done. In the very first episode when she tries to send misbehaving soldiers away from the front lines because she can’t count on them to follow orders, they protest in order to remain. Annoyed, Tanya decides to grant their wish, by leaving them in the position where they’re most likely to get killed. (Which they do.)

Being X never lets Tanya get too comfortable though. Whenever it becomes apparent that Tanya is overcoming her limitations, Being X likes to throw a monkey wrench into things and takes her down a peg.

What makes the whole thing bearable, since Tanya herself is an awful person, is the cast around her. Lieutenant Serebryakov, the only other female soldier in her unit, is incredibly good-hearted, and once Tanya forms her own air mage battalion, Weiss and Grantz form similarly sympathetic faces. Despite Tanya’s disregard for most people, she does seem to genuinely care about her unit and earns their respect in return.

I really appreciate this more nuanced approach to an admittedly fantastical version of World War I. It would have been easy to paint one side as the “bad guys” but the series never goes there and that’s what allows us to see how ridiculous all the speeches about patriotism and honor are. I highly recommend this series.

Pluses: lots of nods to real world history, funny watching Tanya get what’s coming to her, Tanya and her battalion have good chemistry together

Minuses: Tanya is a jerk and that will be a dealbreaker for some viewers, Being X is incredibly petty for a higher power, Being X oddly disappears in later episodes

Saga of Tanya the Evil is currently streaming at Crunchyroll (subtitled) and Funimation (dubbed). Funimation has licensed this for eventual retail distribution in the US.