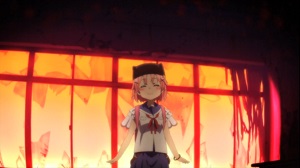 School-Live! really needed to be promoted more accurately to find its target audience, because based on the promotional art (bunch of cute school girls) and the title (very similar to Love Live!, which is about young girls becoming pop stars), I never would have guessed that this was about trying to survive several months into the zombie apocalypse!

The creative team behind it was probably trying to keep the reveal a surprise due to how the first episode is similarly set up to hide the premise, but it really doesn’t do the show any favors.

When we first meet Yuki and the School Living Club, it seems like a common slice of life show where slightly goofy/lazy Yuki doesn’t seem to do everything right, but always gives it her best. Though there are a few things that seem a little off about how other people behave around her, and there is a corridor of the school that is oddly barred off with desks stacked one on top of another, the first episode mostly plays everything as Yuki wishes things to be.

Until the veil cracks at the end, and we see the viewpoint of the most skeptical member of the School Living Club, who has come to retrieve Yuki, who is standing in the middle of a shattered classroom talking with students who are no longer there.

Though the zombie outbreak is covered to a certain degree, most of School-Live! is about staying sane in a world where stepping outside is likely to get the girls killed. The four main characters are holed up in their high school, which fortunately has solar power and a rooftop garden. They do need more than that to survive and go on dangerous supply runs when they have to, but mostly they’re able to stay inside and keep their sanity through the group they’ve formed.

The School Living Club gives the girls a sense of purpose instead of mindlessly ticking off the days that go by, and also serves as a way to control the delusional Yuki, who understands that the School Living Club is a special club that lives at school and is not allowed to leave it. In return, Yuki’s insistence on maintaining normal activities such as club trips and competitions, allows for levity in a situation where the other girls would otherwise have lost any reason to smile.

Each of the other three carries a weight with her. Yuuri is the leader, trying to hold the group together. Kurumi is the warrior, who patrols the school daily to make sure no zombies have made their way inside their safe area (and if slaying must be done, she takes care of it with a shovel). Miki is the skeptic, who knows just how bad it is to be alone at a time like this, having survived separately on her own in a shopping mall before being found by the others on a “club trip.”

Because of Yuki’s delusional nature, the show is not as dark as it could be, and there is something absurd about a club excursion that involves driving a teacher’s car out of a parking lot full of zombies, but the series is not without its more serious moments, especially after the halfway point.

Even though it seems like Yuki’s delusions shouldn’t be tolerated, it becomes easier to see that indulging her is actually helpful to the other girls as many of the things she suggests they’re able to twist into activities that benefit life in their sanctuary while simultaneously lifting their spirits. As Miki knows from her time in isolation, surviving is not the same as living.

I am not particularly a fan of the moe art style, where teenage characters are drawn much younger (even the girls’ teacher, who is probably in her 20s, looks like she’s 15). The characters are all the Japanese equivalent of juniors and seniors in high school, but they’re drawn with proportions that are closer to someone who is ten or twelve. This makes the occasional fanservice scene a little squicky.

On the other hand, the cutesy art style does help establish the incongruity of living a normal school life while there are zombies outside in the courtyard. It’s just not to my personal tastes.

School-Live! is a definite mish-mash of elements that are not usually combined. Whether it’s fake camping trips (while there are zombies outside) or a swimming episode (while there are zombies outside), it wears them very well, which makes the dark lead-in to the finale genuinely nerve-wracking as we see the destruction of what happiness the girls have been able to find.

Though the zombies themselves are not particularly different from the traditional movie zombie, the series itself is a refreshingly novel take on the sub-genre, where optimism and even happiness can still find a place. I heartily recommend it.

Pluses: interesting take on how to keep sane and even happy when surrounded by zombies, capable all female cast, build up to the finale is extremely well done

Minuses: the occasional fan service feels really wrong given the moe art style, sometimes Yuki gets a little too out of control and I’m surprised the others don’t invent a way to tamp down on it, even though one of the solutions at the end is plausible it still feels too easy

School-Live! is currently streaming at Crunchyroll and is available subtitled. Sentai Filmworks has licensed this for eventual retail distribution in the US.