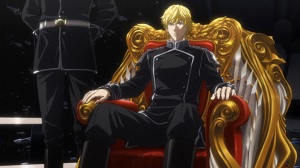 The Legend of the Galactic Heroes: Die Neue These is based on the epic 10-volume novel series by Yoshiki Tanaka (which, by the way, is being released in English at a pace of 2-3 books a year, so we’ll eventually have the whole thing in a couple years).

In the far future, humanity has colonized the stars and formed the Galactic Federation. But eventually a politician seized control of the government and declared himself emperor. Some of his subjects rebelled and escaped to form the Free Planets Alliance, a new republic that is not recognized by the Galactic Empire, and the two factions have waged war for over a hundred years.

This is where The Legend of the Galactic Heroes properly begins. It’s the story of two brilliant military leaders, but also the story of the two nations they belong to. We meet both Admiral Reinhard von Lohengramm of the Empire and Commodore Yang Wen-li of the Alliance in the opening Battle of Astarte, where Reinhard nearly secures victory against a numerically superior Alliance fleet by disregarding common wartime protocols and using sensible strategy that a layperson can follow once broken down. However, before he can finish the job, Yang Wen-li’s admiral is incapacitated, putting him in command of the remainder of the Alliance fleet, which allows him to implement a tactic that forces the battle into a stalemate.

Thanks to Yang, the Empire decides to withdraw, and Yang and Reinhart become well aware of the talented tactician on the other side.

The series feels as though it’s built to see the war through the eyes of these two men. We learn their histories, their motivations, and though they are both excellent strategists, they’re cut from entirely different cloth. Reinhard is a noble, and though originally an impoverished one, his nobility gives him level of acceptance more common citizens of the Empire will never have. His privilege allows him to be daring and manipulative, and he dreams of a world he would like to make safe for the sake of those he cares about, no matter who he has to step over in order to do it.

On the other hand, Yang comes from a blue collar life and entered military school to pay for his college tuition, which he otherwise could not afford. He never wanted to be a combat officer (in fact he’d rather be a historian), but his talent resulted in deployment rather than desk work. Yang is not interested in glory so much as minimizing loss of life, and his intentions are criticized even on his own side for being overly cautious or even cowardly. Given the opportunity, he’d love to resign and live a civilian life, but circumstances won’t let him.

Ideally it seems the series should spend equal time between the Empire and the Alliance, so the audience can get to know Reinhard, Yang, and their cohorts in similarly sympathetic lights (especially since Reinhard is our opening POV for an entire episode), but after the first few episodes the series focuses primarily on the Alliance side of affairs, which feels a little odd. While this makes it clear to the audience the Alliance is no sweet-smelling bed of roses (its politicians embody the worst of election season mania), this also robs us of getting to know more of the Empire’s side of the cast other than Reinhard and his childhood friend Kircheis.

The Empire as a whole is a little too easy to frame as the villain, but to the characters who belong to it, it’s not. Reinhart is well aware of the damage a person at the top of the system can inflict, but being a product of the system itself, his solution isn’t to make a democracy, but to replace the man in charge. We don’t know enough of the other imperial officers to know how many feel the same way or if they believe the imperial dynasty is absolute.

There is also a lot of political posturing going on. I was drawn to the series on the promise of seeing two genius tacticians clash, and the opening two episodes delivered wonderfully, but the middle episodes move on to problems on the homefront, one of Yang’s solo undertakings (which is an excellent two-parter), and to a lesser degree one of Kircheis’s (which had significantly less tension). Both Yang and Kircheis’s missions have heavy political ramifications the audience is made aware of. The source novels were originally written in the 1980s, but it’s almost chilly to see how much of the political turmoil in the Free Planet Alliance still rings true today.

This results in a lot of talking heads when the show is not on the battlefront, many times by politicians or nobles that the primary cast never interacts with. This works out fine in prose, giving context to the conflict and some of the more bone-headed moves, but not so much on TV where names and offices are subtitled for a few seconds and then are largely forgotten.

Probably the worst thing about it is that the series falls short of the Yang vs. Reinhard rematch that we’d expect. Though the finale builds towards that, the final battle of the series is a protracted one and does not fully resolve by the end of the last episode. What we get is a temporary end to combat while people regroup. The battle itself is clearly not over and there is no sort of epilogue to decompress.

Readers of the books might find this particularly odd since this means the TV series does not completely adapt the first book, which covers the remainder of the battle and the political fallout in the aftermath (and ends on a much better stopping point).

The Legend of the Galactic Heroes: Die Neue These is expected to continue as three feature length movies, so the Japanese audience will surely see them, but there’s no guarantee that those movies will readily be available in the US and even so, they might not run on a similarly accessible streaming service.

You won’t be able to get a satisfactory experience from the TV series alone, but the space battles are fun and it’s definitely a more thought-provoking series than most in its genre. If you’re willing to dive into the novels after, I think this is worth watching. Otherwise it might be better to wait and see if the movies make it over, especially if needing a resolution is a must.

Pluses: Gorgeous fleet-level space battles, Reinhard and Yang both feel savvy in their own unique way, Yang’s pacifistic outlook is unique for the genre

Minuses: Some of the antagonistic officers on both sides of the war are complete idiots, the Empire does not get as much focus as the Alliance, lacks a good ending even from the perspective of a story arc

The Legend of the Galactic Heroes: Die Neue These is currently streaming at Crunchyroll (subtitled) and Funimation (dubbed). Funimation has licensed this for eventual retail distribution in the US.