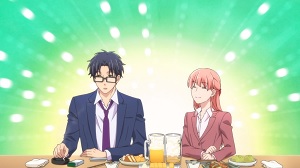 I loved the first episode of Wotakoi: Love is Hard for Otaku. It was pitch perfect, and easily relatable. Narumi starts her new office job and wants to keep it on the down low that she’s an incredible otaku (nerd). The whole reason she changed jobs is that she used to date someone at her old work and he broke up with her after finding out how much of a geek she was. Narumi is not just a casual fan who happens to enjoy cosplayers and boys’ love manga. She’s pretty hardcore about her hobbies and she’s also an amateur comic artist; one that regularly goes to conventions and sells her own work.

Her attempts to fly under the radar go awry though, when she runs into her childhood friend, Hirotaka, who also works there. He’s well aware that she enjoys video games and loves manga because they used to play together, and being rather blunt, he all but outs her in front of her new coworkers until she interrupts that they really should catch up after work. (It later turns out that those two particular coworkers are otaku too, though the rest of the office is not.)

As they catch up, Narumi mourns over her terrible dating life and Hirotaka commersates. Being an otaku sucks when the other person doesn’t understand your hobbies, so Hirotaka suggests that they date each other, and sweetens the deal with geeky promises like being willing to help her when she needs another person for video games, and assisting her at conventions when she needs another person to hold down the booth. Narumi considers it a deal and they seal it with a handshake. (Which is not exactly the most romantic gesture, but points to the kind of relationship they end up having.)

From there the series proper begins.

There isn’t any easing into the dating process. Starting from the second episode, Narumi and Hirotaka are assumed to have been dating for a bit (which completely threw me off) and the series covers all the foibles of being an adult nerd who hangs out with other adult nerds, whether it’s late night gaming parties, group trips to the comic store, or hanging out at a convention.

What’s most refreshing though is that the four main characters are working adults with office jobs, so they show up to work, grab dinner and drinks when they’re done, and maybe slide in some gaming on weekends, which makes them extremely relatable compared to most anime protagonists. They get into arguments over their favorite characters, different aspects of their hobbies, and whether or not a particular move is fair in Mario Kart.

There are two primary couples in the show. Narumi and Hirotaka are the main one, and are going through the process of getting used to dating each other, but Koyanagi and Kabakura are refreshing because they’re both in their mid-to-late 20s and have been dating since high school, making them the older, more stable relationship (even as they snipe at each other over perceived or feigned slights). Since anime usually skips from early dating straight to marriage, it’s nice seeing a couple in a long term dating relationship, and it shows that despite the length of their relationship, they still have problems and insecurities despite the overwhelming familiarity they have with each other. (They also talk to each other and work out those problems, without the assistance of any magic band-aids like a single romantic gesture.)

Most of the time the show is a comedy, the situations are funny because we or someone we know has gone through something similar, so when it occasionally does get heavy, we’re not thrown out of it and the moments ring true to the character and to real life. Who hasn’t wondered if we’re settling for less, or panicked over what could happen on the first visit to a significant other’s home?

Wotakoi isn’t a series that needs to be watched in a single sitting, and the slice of life storytelling style doesn’t really lend itself to that either, but this is one of the few shows I’ve watched where I could say, “Yeah, this could be me and my friends. This could be people I know at work.” And that’s not true of most anime.

If there is one thing that I was disappointed by though, is that the new character Ko is introduced on the second to last episode and we don’t really get to know her before the series simply ends (since it’s not something that requires an ongoing plot). While the main cast consists of high functioning geeks who can pass for non-nerds around other non-nerds, Ko is incredibly introverted and unable to handle talking face to face with other people. She’s lonely, but human interaction is hard. I would have loved to see more of Ko, especially as someone who was very much like her at an earlier age, but it looks like I’ll have to read the manga for more of her.

Aside from that, I really enjoyed it, and I think it’ll speak to people from all avenues of geekdom. It might be an anime, but it’s not only about anime.

Minuses: No overarching storyline, Ko comes in so late the series isn’t able to do much with her