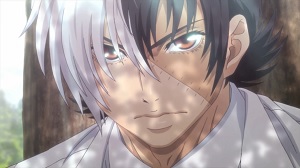 Let’s start from the beginning with this one. Black Jack was an extremely popular manga that ran from the early 1970s to the early 1980s written and illustrated by legendary manga creator Osamu Tezuka (best known in the US for Astro Boy and Kimba the White Lion).

Black Jack is the titular unlicensed surgeon who charges exorbitant amounts of money to perform his job. He gets away with his fees because he’s a medical genius who can save a life when no one else can, but despite his money grubbing image, he’s not as mercenary as he pretends to be.

Young Black Jack (based on the manga written by Yoshiaki Tabata and illustrated by Yuugo Oukuma) would presumably be the story of what turned Kuroo Hazama from a brilliant medical student into the unlicensed rogue surgeon known as Black Jack. Unfortunately, despite having a brilliant era of upheaval to work with by setting the story in the 1960s and having plotlines that run through Vietnam, American civil rights, and the Japanese medical student protests, it mostly manages to fall flat.

Any one of those events in the 1960s could have been enough to twist young Hazama’s ideals from becoming a doctor who helps everyone to the black market surgeon who notoriously only operates on people who can afford his price, but instead he goes through all those events and largely comes out the way he started, robbing him of the kind of growth we expect.

Instead the show feels more like a dry run of his future life, narrated oddly enough, by Akio Ootsuka, who is traditionally the voice of Black Jack (though Yuuchirou Umehara plays the younger Kuroo Hazama in Young Black Jack). Many of the early episodes and surgeries parallel chapters and scenarios from the original Tezuka manga, with the primary difference being several recurring characters and Hazama’s position as an untried medical student.

For instance, in the opening episode, a boy is injured in a train derailment and loses his limbs. When the hospital doesn’t think the limbs can be reattached, Hazama names a large price to the parents and promises to save the child’s limbs.

At first the parents are shocked, because it’s assumed that he’s being greedy, but Hazama immediately arranges for half his fee to be paid to a surgeon at a different clinic so he can use his operating room (the hospital being overwhelmed with other victims), and as promised he reattaches the child’s limbs. After the successful surgery the parents find out that he’s unlicensed because he’s still a medical student, and only pay him half the requested amount since they didn’t like being ripped off by a greedy man who isn’t even a real surgeon. This, of course, means that Hazama did the surgery for free.

Aside from the fact that he’s way too good at his first ever surgery (even for being a genius), it’s a very Black Jack story, but the problem is, we’ve seen it done before and the show doesn’t bring anything new to the table, not even when deliberately making it a period piece. Young Black Jack makes stabs at shaping Hazama through the events of the era, but instead it feels more like a greatest hits tour of the 1960s simply because that’s the time period when he would have been in medical school given when the original manga was published.

I do have to say though that the American civil rights arc did not offend me as much as I feared it would (Japan does not have a good track record of portraying characters of African ancestry), but it still feels like a gross simplification of real world events. Perhaps because the original audience is assumed to be unfamiliar with the civil rights movement, this was necessary to give them a baseline, but it feels like a missed opportunity.

Still, it’s encouraging to see African Americans represented not just there, but among other Americans in other story arcs. They might not be particularly deep characters (none of the Americans are, except for the one who is a surprise cameo of a character from the original Black Jack), but they’re represented, which is very rare in anime and probably owed to Tezuka, who was more conscious of race than most of his contemporaries.

Young Black Jack is a bit of a curiosity because it doesn’t seem entirely willing to be its own beast, and by retreading ground Tezuka himself has covered, it doesn’t feel nearly as fulfilling as going back and reading the originals. Oddly enough, the show also seems unwilling to let Hazama lose a single patient (short of outside interference), which despite being a genius, the older Black Jack does from time to time as a reminder that he’s not a god. He’s just a really good surgeon.

Though we see the road being paved for Hazama’s transformation into Black Jack by the end of the series, it doesn’t feel entirely earned, nor does it feel informed by his experiences. If it wasn’t for the fact this is tied to the original Black Jack property I probably would not have finished.

It’s not that it couldn’t have been good. The manga version of Young Black Jack might well be, considering it’s nine volumes and still running. But there are too many missed opportunities that I can’t recommend it except as a curiosity to existing fans.

Pluses: interesting time period, a chance to see a rookie version of one of anime’s most enduring characters

Minuses: time period underutilized, start of Hazama’s transformation into Black Jack does not feel earned, Hazama is oddly more competent than his older self

Young Black Jack is currently streaming at Crunchyroll and is available subtitled. Sentai Filmworks has licensed this for eventual retail distribution in the US.