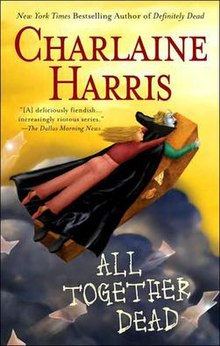 Given the premise, it’s no surprise that there’s a lot going on in this book.  Vampires are known for their scheming ways, and so filling a huge hotel with the highest ranking vampires from opposing factions all across the country is bound to be tense and complicated and potentially violent.  There are schemes on schemes and there is plenty to keep the reader occupied trying to predict who is behind what.  In this book, you get to see quite a bit more detail about the internal vampire hierarchy, and there are a lot of other singular moments that let you get a better feel for the broader worldbuilding that we have typically only been able to get small glimpses of from only knowing a few vampires in small communities.

Easily the best in the series so far, by a longshot.  And, major bonus, there is nothing resembling this book in the TV series, so it is all fresh even to a TV viewer.