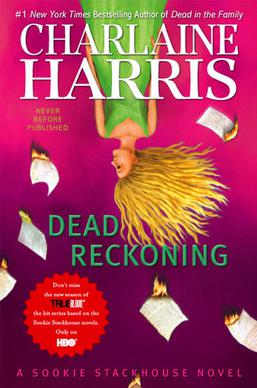 Dead Reckoning is a romance/mystery/horror novel from 2011, the eleventh in the Sookie Stackhouse series of novels by Charlaine Harris (which is the basis of the HBO show True Blood).  The previous books are all reviewed here earlier on the Diabolical Plots feed.

Sookie witnesses the firebombing of Merlotte’s (the bar where she works).  Before Sookie gets to the bottom of that, she finds out that her vampire boyfriend Eric is plotting to kill the oppressive representative of his vampire district, and she is drawn into the plot.  She has also been chafing at the blood-bond between her and Eric that makes a telepathic feedback loop between the two of them.

I thought this was one of the weaker books in the series.  Most of the books have a lot of subplots but it still feels tied together around some central conceit or main plotline.  This one… just felt scattered.  And, Eric feels very different in this one.  Eric has always been a bit opaque and frustrating (not in a bad way, I mean) but in this book he just struck me as being purposefully obtuse on every damned thing, that I just wanted him to go away and stop being the current love interest.  If the series hadn’t already ended by the time I read this book, I probably would’ve stopped reading in the midst one and not kept going.  (But since I knew there were only 2 more books I did keep reading).