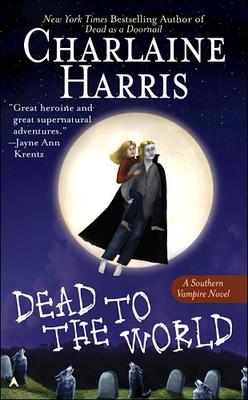 Dead to the World is a romance/mystery/horror novel from 2004, the fourth in the Sookie Stackhouse series of novels by Charlaine Harris, which is the basis of the HBO show True Blood–this book was used very loosely as the basis for season 4 of the show.  The previous books in the series (in order) are Dead Until Dark, (reviewed here),  Living Dead in Dallas (reviewed here), and Club Dead (reviewed here).

Sookie (fresh from a breakup with her vampire boyfriend Bill)comes across the vampire Eric Northman running down a deserted road, with no memory of his life before that moment.  She finds out that he has been cursed by a coven of witches that have moved into Shreveport and have been threatening Eric and his business interests in order to extort money out of him.  Since Eric is more vulnerable than usual, without his memories, Sookie agrees to hide him at her house for a time; her brother Jason negotiates a fee for her to do this since she is short on money.  But, shortly afterward, Jason disappears and the local police can’t find a trace of where he’s gone.  Sookie fears that he has been abducted by the coven as well.

This story was the best in the series yet.  It had a lot of interesting mystery going on with the missing brother and trying to find out how to combat the invading coven.  One thing that kept it more fresh for me was that although a season of the TV show was loosely based on it, the basis was SO loose that there was still a lot to surprise me, and so I didn’t have the same issue as I had in previous books with wanting to draw direct comparisons between events.  Although that season and this book both involved an invading hostile witch coven, and Eric having his memory cursed away, that’s about where the similarities end.

I was a little worried going in that it would cast all witches as villains–I know a few Wiccans so I didn’t want it to be a blanket condemnation.  But the book had no issue in that regard–the book does differentiate between Wicca as a religion and witchcraft, and there are both witches as allies and witches as enemies in the book, so I was happy to see that.

Also interesting was that, with Bill out of the picture and an amnesiac Eric secretly living in her house, for the first time in the series Sookie gets a real shot at another romantic partner.  Which mixed things up a bit, to keep things interesting.