<This report is reprinted from Lou’s blog>

This past Labor Day weekend was my very first time attending Dragon*Con as a publishing professional, and really my first “real” time at all. I say first “real” time because I went three years ago for a single day to see Jetse de Vries, who was there at the time with Interzone. I spent most of it with him at his table, watching the crowd pass him by for the guy next to him installing vampire teeth (at $60 a pair, using the same dental instrument and, seemingly, not bothering to clean it between applications). I left with the (mistaken) impression that it was a weird goth con with nothing to offer the book trade. I came back when Mike Resnick and others kept telling me that I had it wrong, and what’s more, the percentage of people there aware of and interested in books was growing every year, both in the demographics of the attendees and among the organizers.

So I was there with a specific agenda, which was to see if it was a place that Pyr books needs to be in future. 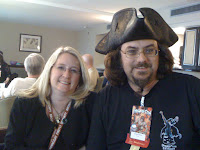 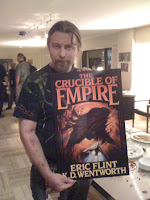 Then there was the art show – in a HUGE and very HIGH CEILING-ED space, and featuring artists like Bob Eggleton, Don Maitz, Rick Sternbach, and William Stout. 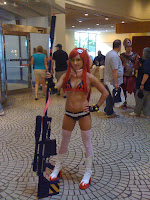 As to how all these publishing folk were being received, I myself spoke on three panels and did one live podcast (thanks, Mur!). The smallest panel had over 60 people in the audience, the largest around 120, and the podcast was standing room only with about 60 people. What’s more, they weren’t the same people all weekend. And lots of people came up to me and shook my hand and told me how they really appreciated what I said on my panels. 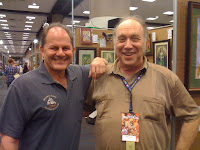 My assessment: This feels very much like the place to be, and if it isn’t yet, it’s going to be soon. Probably very similar in vibe to the San Diego Comic Con when it was smaller, before Hollywood 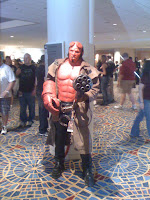 became the driving engine. The other thing I noticed at Dragon*Con verses Comic Con is that, though it has that crucial young demographic, there seems more interaction between the age groups. You saw children, teens, 20/30 somethings, parents with small children, and old folks, all hanging out together, rather than all there and then peeling off to hang separately. I liked that a lot. For the writer looking to do business as well as meet with fans, it’s probably not there yet in the former category, but will be as more publishing professionals choose to attend in future. And in terms of the attitude of the con to publishing, both the organizers and the audience certainly communicated that they were interested in books in general and Yours Truly in specific. I felt appreciated, welcome, and productive. I felt something slightly different when the near-naked, 300 pound guy with a mohawk and fangs grabbed my ass on the elevator.

But hey, it was Dragon*Con, after all! At least some of my first impressions weren’t mistaken. 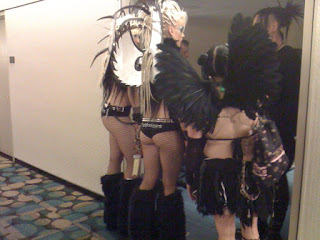 A 2009/2008/2007 Hugo Award nominee, 2008 Philip K. Dick Award nominee, 2008/2006 Chesley Award winner/nominee, and 2006 World Fantasy Award nominee, Lou Anders is the editorial director of Prometheus Books’ science fiction and fantasy imprint Pyr, as well as the anthologies Fast Forward 2 (Pyr, October 2008), Sideways in Crime (Solaris, June 2008), Fast Forward 1(Pyr, February 2007), FutureShocks (Roc, January 2006), Projections: Science Fiction in Literature & Film (MonkeyBrain, December 2004), Live Without a Net (Roc, 2003), and Outside the Box (Wildside Press, 2001). In 2000, he served as the Executive Editor of Bookface.com, and before that he worked as the Los Angeles Liaison for Titan Publishing Group. He is the author of The Making of Star Trek: First Contact (Titan Books, 1996), and has published over 500 articles in such magazines as The Believer, Publishers Weekly, Dreamwatch, DeathRay, free inquiry, Star Trek Monthly, Star Wars Monthly, Babylon 5 Magazine, Sci Fi Universe, Doctor Who Magazine, and Manga Max. His articles and stories have been translated into Danish, Greek, German, Italian & French.