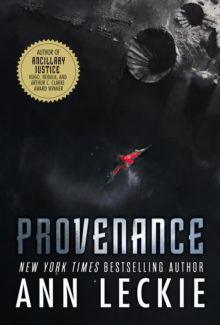 Provenance is a science fiction novel written by Ann Leckie released in September 2017 through Orbit Books, which takes place in the same universe as her breakout Imperial Radch trilogy (Ancillary Justice (2013) , Ancillary Sword (2014), Ancillary Mercy (2015)).  This book takes place shortly after the events of Ancillary Mercy.  It doesn’t share any of the characters or settings, but some of the political forces, cultures, technology, and alien races are familiar to those who’ve read the trilogy.  I don’t think you’d have any trouble following the story if you hadn’t read the trilogy, and I think it would work fine as a standalone, but you may have a shortcut to understanding certain elements from having seen the cultures and species in the previous books.

Ingray Aughskold is the adopted daughter of a wealthy politician, eternally pitted against her brother for her mother’s favor since her mother hasn’t chosen a successor for her position yet.  Always outdone by her brother, Ingray spends all of the money she has at hand in a desperate bid for her mother’s attention, and pays to have a criminal smuggled out of what is supposed to be an inescapable prison for a far-fetched scheme to win money and fame.  When the person she is delivered claims to have no idea who she’s talking about, she’s back to square one on a strange planet with very little resources.  She can’t call her family for help if she wants to make it anywhere in the competition with her brother.  She tries to salvage some scraps of her original plan.

I enjoyed revisiting the universe from the original series, and to see some areas of it that are not familiar.  Most of the trilogy had taken in Radch space and so was colored by Radch technology and Radch politics and Radch culture.  This takes place outside of Radch space, though there are Radch characters.  One of the interesting things about the Radch trilogy had been that Radch refer to everyone by default pronouns and have little to no concept of differing genders at all, finding it very disconcerting when they need to speak in other languages where gendered pronouns are required.  In this book, you get to see a mixture of different cultures and how they view things like gender, and tradition, and I found that fascinating.  I was also very excited to get to see closer interactions with one of the alien races that I hadn’t seen in the Radch books.  While Ingray did have a vague plan in mind for much of the books, I felt at times that coincidences tended to land a little too neatly to make it all work out, but the plot kept me guessing and I was rooting for her along the way.

I recommend the book, especially if you read the Imperial Radch trilogy and would like some more from the author in that universe.