The Hugo Graphic Story category is the one that I look forward to the most, because I enjoy the medium, but I don’t really keep up with them on a regular basis, so the Hugo packet catches me up on some of the popular comics of the previous year.

I only read the stories that were included in the Hugo packet, so did not read Zombie Nation #2, which was not included.

Kamala Khan is a sixteen-year-old Pakistani-American Muslim living in Jersey City with her family, trying to figure out how she fits into the world, at least when she’s not reading comics or gaming.  She doesn’t feel that she fits in with her peers who she has trouble relating to, but she also doesn’t feel in place at the mosque and she doesn’t feel comfortable in some of her family’s strict traditions.  One night she sneaks out of the house to go to a friend’s party and begins to exhibit strange abilities after she passes through a strange fog.  That first night she takes on the appearance of Carol Danvers in her old Ms. Marvel costume (Carol Danvers is now Captain Marvel), and she saves someone’s life.  She experiments with her newfound abilities and finds that she can alter her body’s size and shape in a variety of ways.  Taking on the name Ms. Marvel, and with a new costume built from a burkina (a traditional swim garb her mother bought for her which she has been too embarrassed to use)  In this first volume, she tries to decide what to with her abilities as she hones her skills.

Kamala Khan is one of Marvel’s most memorable characters in their recent push to diversify the stars of their comic lines.  Most of the original lines were made in the 1960’s and mostly star white men as the stars, so it’s a refreshing change to see more women, more varied ethnic backgrounds, and (for me at least) particularly interesting is to see a character with not only a religion, but a non-Christian religion–even in fiction in general it’s too rare to find religion as an element which is neither preached nor villified.  To see religion (and, again, a non-Christian religion especially) as an element in a comic book in that fashion is wonderful.

But I don’t like it merely for its diversity.  I found Kamala to be a very interesting and compelling character.  She’s a gamer and a comic fan, just like me, and I had my share of social difficulties at that age.  In some ways her situation remains me a young Peter Parker–with the split between high school social things and the superheroing, the reason that I think Spider-Man proved as popular as he has.

There are lots of fun little in-jokes for long-time science fiction fans to reward careful reading and examination of background art, as well as just some other jokes such as the cereal brand “G-M-Oh’s!”

I highly recommend reading this, whether you’re a long-time comics fan or new to the medium.  This is a rare comic that has made me want to get my first comic book subscription.

Suzie is a librarian who discovered at a young age that she is different than other people in one important and secret way–whenever she experiences an orgasm, for a while afterward the world around her freezes and she is the only moving thing in this shimmering and immobile place she calls “the quiet”.  As an adult she finds another like her, a man name Jon, only realizing after they have sex and he is not frozen like the rest of the world.  This first volume covers both of their sexual histories, their meeting, their experimentation with the connection they’ve found over this strange shared ability, and their choice to rob a bank–the bank that is foreclosing on her library, the bank that he works for.

I enjoyed this quite a bit.  Because of the lewd subject material, it’s a hard book to make a blanket recommendation for.  It’s not a book that I’d bring up at a family reunion, for instance.   But I found the frank discussion of sex from both a woman and man’s point of view to be refreshing, including the discovery of sex when they were younger–a topic that is often near-taboo even though it’s a natural thing for children to discover masturbation long before they reach sexual maturity.  Some elements of it are pretty corny, but I thought they were corny in a good way–they hung a lantern on it and used it for laughs instead of trying to take everything too seriously.  I thought the volume was funny, refreshingly honest, and entertaining to read.  I found the choice to rob the bank a bit of stretch, but maybe not considering the powers that they have.  I’m curious to see where the series goes after this volume.

I really wish they’d chosen a different title, though.  I see what they were going for, since their bank-robbing relies on their sex-triggered ability, but usually “sex criminal” means a rapist or a child molester, not exactly what you’d consider the hero of a comic book. 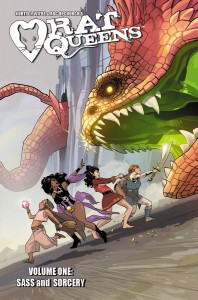 The Rat Queens are a quartet of women adventurers hailing from the town of Palisade.  The group is made up of the elven mage Hannah, the dwarven warrior Violet (who has shaved her beard), atheist human cleric Dee, and the halfling thief Betty.  When they’re not out adventuring, they spend their time carousing, doing drugs (and candy in the case of Betty) and having large-scale destructive bar fights.  The town of Palisade has a bunch of mercenary/adventurer teams that are assigned tasks from time to time by the city government–after a particularly damaging barfight, the Rat Queens and other merc groups are all sent out on simultaneous missions but the missions turn unusually deadly–somebody has set ambushes to take out the mercs.

This comic was inspired by D&D games, and it shows–there’s a lot of fun, a lot of humor.  An all female fighting cast is refreshing, and it’s good to see a variety of body types of both men and women characters.  The characters were interesting and I liked to see the mix of men and women characters who treated each other as equals without sex having to be an element between them (but of course sometimes it is).  I liked some of the humor, other of it was a miss–I guess I’m not much of a carouser myself so that angle didn’t really interest me as much as the comic seemed to be aiming for.  The fight scenes were pretty cool to a degree but they often dialed up the violence to the point that it got to be a bit much for me at times, it felt a little bit like a Tarantino film here and there. 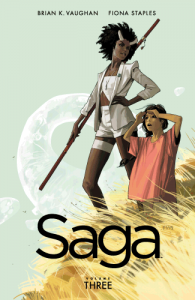 Volume three, as with the earlier volumes, mostly focuses on Alana and Marko, a husband and wife of warring extraterrestrial races, and their newborn daughter.  They are fugitives from both bounty hunters and from the Android known as Prince IV of the ruling android royalty.  In this volume Alana and Marko and their ragtag crew take refuge at the home of revolutionary novelist D. Oswald Heist.

I read Volume 1 in the Hugo packet a couple years ago.  Volume 2 wasn’t in last year’s Hugo packet and I didn’t seek it out, so I’m sure I’m missing some important background for this story.  I was a little lukewarm on the first volume, but this one I warmed up to a little bit more.  There’s certainly some real personal stories told here, with Alana and Marko trying to figure out practical things like caring for a baby and trying to find an income stream when they are traveling fugitives, as well as having some more action-packed elements when different hostile groups cross paths.  I liked the art design of most of the characters, incorporating people we would recognize as varying races, but giving them further inhuman embellishments like horns, wings, single cyclopean eyes, etc.  The androids I still found rather hard to take seriously with their cathode-ray-tube TV heads, a design which is already outdated in our present, let alone in any future.