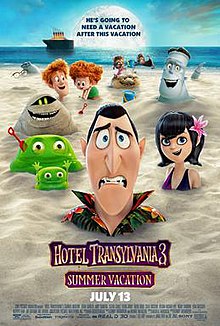 Hotel Transylvania 3 is a 2018 computer-animated children’s comedy produced by Sony.  The legendary vampire Dracula (Adam Sandler) is running a successful hotel for monsters in Transylvania with his daughter Mavis (Selena Gomez) and her husband Johnny (Andy Samberg), but he is feeling lonely and depressed that he hasn’t found new love since the death of his wife, although he believes in soulmates so feels that he has already met his one true love (which he describes as  “Zing”).  Mavis senses his mood, but attributing it to overwork, decides to plan a family vacation, taking a monsters-only cruise.  But on the cruise he gets the “Zing” when he meets the ship’s captain Ericka and with this newfound interest, he tries to woo her, not knowing that she is a descendant of Abraham Van Helsing, who had been his nemesis long before, and that she has planned this cruise as a way to trap him and his other monster-kind.

If you liked the previous two movies, you’ll probably like this one too; it’s very much cut of the same cloth, with much of the on-screen time being with the supporting cast of monsters like Murray the mummy (Keegan-Michael Key) and the werewolf couple (Steve Buscemi and Molly Shannon) and the invisible man (David Spade).

But, compared to the other two, I thought this one was a marked improvement in having a central plot that wasn’t one protagonist deceiving his daughter into staying home forever like the first movie, or obsessing over whether his human/vampire grandson is “too human”.  There is an antagonist and the plot of the movie couldn’t be resolved by simply not being a giant narcissistic jerk.