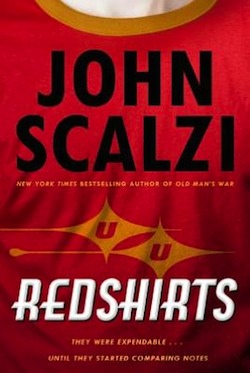 Most people who spend a lot of time around geeks like myself are familiar with the term “redshirt”. It is relevant here, so for the benefit of anyone who isn’t aware, I’ll briefly explain. The term “redshirt” refers to a “cannon fodder” character in a piece of fiction who exists strictly for the purpose of killing in order to raise the stakes. In the original Star Trek TV series the main recurring characters of the show were often accompanied by acting extras who frequently died in some way that illustrated the dangers of the particular planet they were visiting that week. According to Wikipedia, 73% of crew deaths in the original series wore red shirts.

Looking back on the series, the redshirt cannon fodder members of the crew are kind of funny, particularly to an SF geek who likes to obsess about things and look for patterns. But it wouldn’t be so funny if you were one of those crew members, having gone through Academy training and getting stationed on an exploratory vessel just to get eaten by random planetary fauna.

The main characters of the main story of this book are the redshirt type of expendable crew members on an Enterprise-like exploratory vessel, part of a branch new batch of hires that are a result of the aforementioned recent rush of crew deaths. Our main character is Ensign Andrew Dahl who has just recently signed on to the starship Intrepid as a member of the xenobiology department. Early on he meets other new crew members who were hired on as part of the hiring run.

As they start getting acquainted with their positions on the ship, they start noticing bizarre patterns to crew behavior. The subject of away teams carries an ominous weight, which likely has something to do with the fact that all of these new hires were taken on to replace crew members who have met sudden and gruesome deaths on such missions. The longer-standing crew members have a knack for mysteriously disappearing whenever the senior officers pass by, and for some reason neither the Universal Union or even the press show much interest in the ridiculously high mortality rate among crew members. Something screwy is going on here, and they need to find out what before they all become victims.

From the prologue and the first chapters, I had thought this was simply a parody of Star Trek for strictly comic effect. As the book went on, I’m not sure that’s how I would describe. It certainly has elements of parody, and mentions Star Trek specifically by name, but the story takes the redshirt characters’ plight seriously even though the situations and circumstances around them are ludicrous so that I would describe it as an action-adventure SF drama in a setting with parody elements. Which is cool, there’s a nice mix of flavors here of comedy but of real human stakes and tragedy. The ludicrousness of the situation is recognized by the characters themselves, and makes their potential deaths all the more tragic, because no matter if you are afraid of death or not no one wants to die a pointless ludicrous death.

It’s quite a difficult bog of a situation these characters are mired in, kind of science fictional, very meta as it the characters realize early on that their situation is not normal. I liked this main plot and I liked the resolution of it, which it turned out ended about 2/3 of the way through the pages of the book. After that are three codas, which I haven’t quite settled on a firm like or firm dislike for. Coda I is in first person, Coda 2 is in second person, Coda 3 is in third person. The first coda was written about a writer writing about writing–a trope which has been way too well worn by many authors that it has to be something really special. Which it wasn’t. Not surprisingly, I hate the style of the second person story as I always find that method of telling to be gimmicky and distracting. This is no exception. That section alone made me feel like John Scalzi was filling the rest of his pages were more than a bit self-indulgent, more of a writer’s exercise than a book. The actual story told in the Coda 2 was good, but the style was bad. The third coda was good all around and ended on a particularly well done tone.

So, generally I’d recommend Redshirts on the merits of the main plot of the story. Particularly for any Star Trek fans or people who like some weird twisty plot situations. The codas after the main story were a bit hit and miss, and could’ve used a little less self-indulgent writer style and a little more straightforward storytelling, but their content is still worth reading them for.