Spring looks to be a slower season than the packed viewing schedule I held in winter. It helps that this time Fate/stay night: Unlimited Blade Works is the only returning series that I was already watching and it won’t have to fight much for my viewing time. Last winter’s Fafner: Exodus will not air its second cour until later in the year.

Depending on how things shake out in spring, it’s possible I’ll go back and finish one or two of the shows I left behind in winter, but right now I’m just looking for two more series to watch alongside Fate/stay night.

Here are my thoughts on the first episodes of some of the new spring shows. 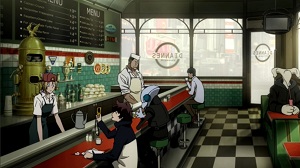 Why I Watched It: New York City has become a battleground for the supernatural, cut off from the rest of the world by a bubble that keeps the craziness, and the New Yorkers, contained inside. I had heard favorable comparisons to the cult hit Baccano.

What I Thought: The first episode is pretty frantic with very little explained other than the basic worldbuilding that enables a world where otherworldly creatures existing openly on the streets along with normal humans. The combat is a little over the top, and I’m not sure I like the snooty demon who seems to be getting set up as the antagonist, but I love the mix of mundane and supernatural where the humans don’t see anything unusual about living with their new neighbors.

Verdict: I will be watching. Leonardo seems an unusual choice in protagonist in that his powers are decidedly non-combative in a very combat-oriented anime, but it might mean an interesting change of pace. 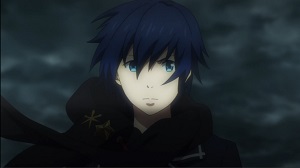 Why I Watched It: Parallel worlds where the main character’s other self is the villain, paired with gravity-defying gun-fu combat scenes? It didn’t need much else to sell itself. It’s also based on the Gunslinger Stratos arcade game which never came to the US.

What I Thought: It’s not as light on story as I thought it would be (but that’s not saying it’s deep either). Tohru isn’t much different from most anime protagonists in that he’s a reserved young man who wants to do the right thing, but he’s a pretty good shot, likely only hampered because he’s such a nice guy, which is of course a problem his antagonistic alter ego doesn’t seem to have. Literally falling into a parallel world where crazy gun battles are commonplace is kind of contrived, but I’m willing to give this a benefit of a doubt just to get to the good stuff.

Verdict: I’ll be watching. Based off the first episodes I’ve seen, it’s surprisingly the one I want to watch the most out of this season’s premieres.

The Heroic Legend of Arslan 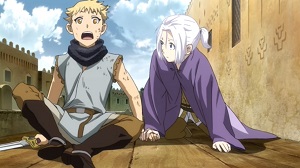 Why I Watched It: Arslan Senki is a venerable novel series set in a fictional world inspired by historical Persia. It was adapted as a direct to video anime before in the 1990s, but was never finished. Considering its pedigree, I wanted to check it out.

What I Thought: The first episode didn’t impress me too much at first. Eleven-year-old Prince Arslan is woefully naive and mostly ignored by his royal parents. It’s a road that’s been trod before. But when he meets a prisoner-of-war his own age who’s destined for the slave market, he’s baffled that anyone would choose to die rather than be guaranteed food each day. Clearly the series is setting up for some shattering event that will throw Arslan into a war that challenges the beliefs he grew up with. And the people of the opposing country are not saints either, since they’re invading to kill the heathens who do not share their beliefs.

Verdict: I might be watching, but it’ll probably depend on what happens to Arslan and how quickly he matures (or if a more interesting cast member gets introduced). While he ages to fourteen in the next episode, I’m not sure how much more of his naivete I can take.

Is It Wrong to Try to Pick Up Girls in a Dungeon? 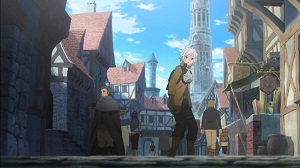 Why I Watched It: That title says it all. It sounds like a comedy about someone whose life is essentially a role-playing game. I had to give it a shot no matter how bad it might be.

What I Thought: Main character Bell is surprisingly not trying to pick up every girl in sight, but rather wants to impress a single lady who saved his life (though his reason for going into the dungeon in the first place was to meet one). Believing that she’s totally out of his league, Bell embarks on a quest to become stronger in his strangely RPG-style world, which means level grinding to improve his stats and getting money to help grow the Familia, or adventurer’s guild, of his goddess patron. There’s some annoying fanservice courtesy of the goddess who has a crush of her own on Bell, but I like that Bell seems pretty set on who he wants.

Verdict: I’m probably going to pass. It was funny, but living in a RPG world feels really overdone right now, with both Sword Art Online and Log Horizon still in recent memory. I don’t think Is It Wrong to Try to Pick Up Girls brings anything new to the table. 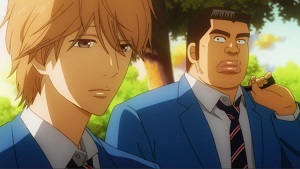 Why I Watched It: Based on a girls’ comic, My Love Story! breaks popular convention in that the main character is a big, stocky guy with a heart of gold but the face of a thug. All the girls want his good-looking best friend instead, until he gets a chance to be someone’s hero.

What I Thought: It’s incredibly rare to see a romance from the male point of view, especially from the guy who is typically the wingman and has yet to discover he’s actually the protagonist in his own love story. Takeo is sweet, but a bit broken down since every single girl he’s ever had a crush on has instead confessed their affection to his conventionally handsome best friend (who then shoots them down). So when a girl crushes on Takeo for real he decides she must also be interested in his best friend and he should do whatever he can to help them hook up.

Verdict: I might be watching. While the setup is a nice change of pace, I’m not entirely sold on it. Being a non-action piece, a lot is going to rely on the characters, and other than Takeo himself I haven’t found anyone else engaging. 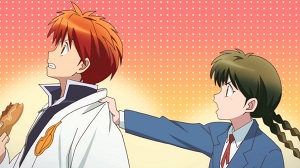 Why I Watched It: The latest from manga creator Rumiko Takahashi, best known for Ranma ½ and Inuyasha (though my favorite of her work is Maison Ikkoku). My tastes have changed since I was originally introduced to her work and I don’t think I’ll like it as much anymore, but I’ll still check the latest out.

What I Thought: It definitely feels like a Takahashi series with her unique art style and brand of comedy, though I’m surprised the whole first episode went by without a single lewd joke. Instead much fun is made of male protagonist Rinne’s stinginess to the point that he believes main character Sakura’s 1500 yen ($12.61 US) is a small fortune. Most stories involving a girl who can see ghosts and a boy tasked with guiding restless spirits back to the wheel of reincarnation would probably take itself seriously, but Takahashi’s absurdist rendition of ghostbusting has Rinne paying a few yen every time he needs to operate/purchase the tools for his job and features a lonely ghost finally agreeing to go to the wheel of reincarnation because there are girls over there.

Verdict: I might come back and watch later. I was really surprised. If I liked comedy more I think this would have ranked higher.

Seraph of the End 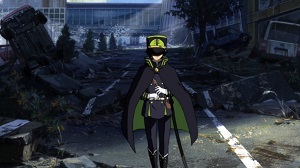 Why I Watched It: Honestly, I didn’t really want to watch another show with vampires, no matter how nice the promo art looks, but Hiroyuki Sawano is one of my favorite composers ever and he’s scoring this one so I figured I’d at least listen.

What I Thought: Better than expected. When all humans above age 13 die to a mysterious virus, vampires take children under their “protection” and provide them with food and clothing in exchange for being livestock. Most of the first episode is story setup, showing main character Yuichiro and his best friend Mikaela as children as they deal with their new reality and try to escape the underground city the vampires are keeping them in, so it’s hard to see how the rest of the show will play out. The vampires are pretty ruthless though and I was surprised to see how high the underage body count was. The episode ends with a time skip bringing Yuichiro to sixteen and no information as to what happened in the intervening years.

Verdict: I might be watching. It’s piqued my interest, but I’ll have to see how it stacks up against the rest of the season. If it avoids having angsty vampires it’ll stand a better chance.

Digimon Adventure tri – The much anticipated 15th anniversary series for the Digimon franchise seems to have been delayed. After the hype train that has been running since last year, it’s a little bit of a disappointment, but hopefully this means the series will have a chance to fix any production problems it might have been having.

Sushi and Beyond – Based on a British journalist’s book about how he and his family took a 100-day trip to Japan to try out a wide variety of local foods. It seems that it’s being broadcast in some local Japanese TV stations in the US in partnership with NHK World, but there has been no simulcast arrangement.