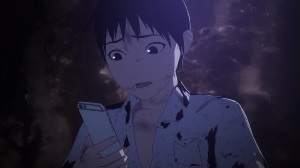 Ajin initially bears a superficial resemblence to Tokyo Ghoul, in that the protagonist goes from normal human being to a monster in the first episode. From there Kei Nagai undergoes a similar journey from lamenting his fate to accepting what he is, but Kei’s journey progresses faster and he takes a decidedly different tack when it comes to dealing with what he’s become.

The past couple decades have seen the emergence of a few people called Ajin. They cannot be conventionally killed. Any lethal damage from starvation to disintegration will result in the body dropping for a few seconds to a minute before regenerating to full health. But the interesting thing is that partial damage stays until the body dies, so it’s possible to incapacitate an Ajin for capture. Ajin themselves can put their regeneration to creative combat uses and may intentionally try to kill themselves if they’re too hurt.

Ajin are still incredibly rare though, with only 46 known to the world at the start of the series, and they’re considered to be no longer human. Any found are quickly rounded up by the government which is rumored to experiment on them. Since they can’t die, they’re excellent guinea pigs.

The catch though is someone has to die first in order to be identified as an Ajin. There are likely lots of humans around who just don’t know what they really are, as well as Ajin in hiding who died outside of anyone else knowing.

Kei Nagai is an isolated high school boy with superficial friendships (his contacts are seriously named Friend 1, Friend 2, Friend 3, etc. on his phone) studying to be a doctor. He knows his mother’s expectations of him, to become a good upstanding member of society, and he’s so dedicated to his schooling that he reads through vocabulary words on a keyring flipbook when walking to school or even during class when his teacher decides to talk about stuff that he explicitly says is not going to be on the test.

This incredibly inward focus causes him to not pay attention when crossing the street when an inequality inattentive truck driver doesn’t see him. This results in Kei being lethally crushed by the oncoming truck, only to pull himself out from under it moments later to the horror of the bystanders around him.

Kei, realizing that he can’t really trust anyone, bolts before a police noose can close around him. His lack of interpersonal relationships means that he really doesn’t have anyone to turn to, which makes him an unusual protagonist.

Once he learns to accept that he can’t go back to his old life, Kei’s personality shifts, though there are suggestions that this is the real him that was buried the entire time. Kei is logical and pragmatic to a fault and barring an emotional connection with Kaito, the estranged childhood friend who ultimately helps him escape when he first discovers he’s an Ajin, he views his relationships through a cost/benefit analysis. This jives with his superficial friends at school, where he is likely friends with them because they’re “good” people to be friends with, people who are going to make it later in life.

It’s extremely rare to have a protagonist who is baffled when someone helps him when there is clearly no benefit to the other party. Kei isn’t intentionally mean when he decides whether or not it’s worth helping someone, and more than once he hesitates to actually carry out his logic, but his sense of self-preservation is strong and prevents him from taking chances. However, he is canny enough to realize the importance of appearances, so if helping someone is in his interests, he will be a helpful and giving person.

However, Kei spends a lot of time in the first half of the series as a novice Ajin who is still trying to have some semblance of a normal life, so the audience is also immersed into the two primary factions that inhabit this world.

The first one introduced is the government Ministry of Health, Labour and Welfare, which has a task force dedicated to capturing and experimenting on Ajin. Yuu Tosaki is the head of the Ajin Control Commission under them, but he’s one of the most complicated characters in the series as he shelters an unregistered Ajin while also capturing others. He’s ruthless and driven, and willing to take unethical steps to get the job done, but his motivations are entirely human as he’s done the equivalent of selling his soul to the devil for the money to treat his comatose fiancee. This makes it possible to feel for him while he fends off the bosses who are willing to sacrifice him on the one hand and torturing people on the other.

Opposing Tosaki on the other side is Sato, an old man in a cap who is an unregistered Ajin. Sato plans to create an Ajin-ruled nation, carving it out of Japan itself. He’s an interesting character and a master manipulator though we get little backstory on him. Sato likes to do things the hard way (though he’s quite clever about it) so as to keep things entertaining for himself and he recognizes the importance of media.

Sato is the kind of guy who will release a video about Ajin being violently experimented on to the internet knowing that the real Ajin will be able to tell the real videos from the fakes because they know how it really looks when Ajin regenerate. By appending that video to a plea to publicly protest the treatment of Ajin at a specific time and place, he enables himself to secretly meet other Ajin who’ve been living in hiding and put together a force that can actually one-up the government in one of the biggest ways imaginable.

Unlike Tosaki, who is possible to empathize with and even root for (since he’s spends more time chasing Sato than Kei), Sato is a monster. He’s fun to watch because he’s an intelligent villain who gives off the air of being a congenial old man even when blowing people’s heads off, but he’s completely unconcerned about collateral damage and kills as easily as breathing.

One of the things I like the most about Ajin is that after the ground rules are laid (and one accepts the fact that the higher ups in the government are slow-moving idiots), everyone plays intelligently. Tosaki’s measures to stop Sato are solid based on what the audience knows, and Sato’s way around them is also good. Even Kei, while living in hiding, is extremely competent for a high school student his age. It’s nice to have a series with such a high competency level between different players.

If anything, the hardest thing to buy into is the animosity towards Ajin before the major events get underway. Though it’s clear from the opening minutes that a determined Ajin is extremely dangerous, nearly everyone Kei knows is either ready to sell him out or disgusted with him the minute they find out he’s an Ajin and they know that up until that moment he was just a studious high school student.

The animation of Ajin is done by Polygon Pictures, the same studio as Knights of Sidonia and the two series share a similar design and animation aesthetic, using computer generated characters intended to look like cel art. It’s not necessarily possible to tell the difference from screenshots, but it’s quite noticeable when watching characters do complicated movements where the motion seems oddly fluid for an anime series.

As with Sidonia the choice to go CG is a good one for Ajin as the Ajin characters frequently get injured and run around with “battle damage” that would be a pain to traditionally animate frame by frame and each Ajin has an IBM, a sort of black wraith-like creature they can summon that is best served with computer graphics since they have a ropey ethereal look while being hollow inside.

This also works in favor of the more elaborate choreography for the multiple combatant fight sequences, with an absolutely gorgeous one between Sato and a special forces team towards the end of the first season.

But on the other hand, the lighting is a little weird again, making a lot of characters look flat or washed out, and noses sometimes disappear if the angle of the shot prevents shadow on the face.

Ajin has two seasons available and there’s no word on a third. The manga is still running so the anime series doesn’t have a definitive ending so much as a story arc one. Unfortunately the series is only available on Netflix so it will require a subscription, but it’s highly bingeable and well suited to the platform.

Ajin: Demi-Human is currently streaming at Netflix (subscription required) and is available both subtitled and dubbed. Sentai Filmworks has licensed this for Blu-ray/DVD in the US.