I’m running late with this season’s impressions. Unlike last summer, which was fairly lackluster, fall had a number of new anime series I wanted to check out, including what is becoming one of my favorites ever, so I think it’s still worth bringing attention to these, even though the season is almost over!

As usual, I look for two to three series to keep me entertaining throughout the season and this fall wasn’t hard to choose from. 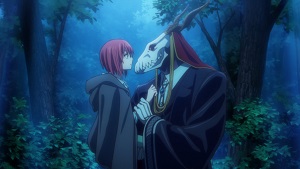 Why I Watched It: This is the most buzzworthy show of the season, about a lonely teenage girl who auctions herself to the highest bidder only to discover the man who has purchased her is a magus with the head of a beast, who takes her for his apprentice.

What I Thought: It was gorgeous to look at, but I wasn’t entirely sold by the first episode. Though Chise has obviously been troubled throughout her life due to being an orphan who sees supernatural creatures that most people can’t, I still didn’t feel connected enough with her to understand her pain to the point that she decides it’s better that someone other than her is in control of her life. Elias is interesting since he is clearly not human, but his own mysteries aren’t covered in the first episode. Also, it’s just a bit creepy that one of the reasons he bought her is that he would like to marry her later, assuming she’s interested.

Verdict: I might watch later. I have a feeling this will pick up in an episode or two, now that the main characters and their living arrangements have been established, but at least for the start of the season there’s other stuff I’d prefer following. 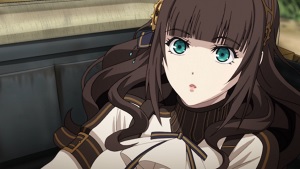 Why I Watched It: Based on my favorite otome game, Code:Realize is an adventure/romance set in 19th century steampunk London. Cardia lives isolated in the manor where her father left her because she is a poisonous monster whose body melts everything she touches, until one day the queen’s men find her and she is rescued by the dashing gentleman thief, Arsène Lupin.

What I Thought: I was a little concerned about the animation style going in and it still has an odd airbrushed look to it that bothers me, but the adaptation itself is on point and actually flows better than the Chapter 1 in the original game, even though a lot of things are rearranged or cut to quickly get Cardia integrated with her new companions. The show doesn’t shy away from Cardia’s potentially graphic flesh melting abilities and it shows enough to get the point across without entirely sugar-coating how lethal she can be. There are still a lot of questions left at the end of the episode, but I think it’s enough to be a satisfying appetizer for anyone looking for a steampunk fantasy.

Verdict: I’ll be watching. I likely would be anyway even if it turned out as a lesser incarnation of what we got, but to my relief this episode is actually good. Cardia might seem lackluster as a protagonist right now, but assuming they stick true to the spirit of the game we’ll see her grow over the course of the series. 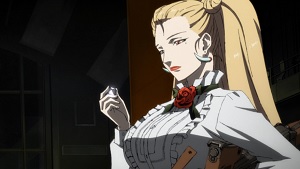 Why I Watched It: I don’t like the art style of this one, but I heard about how each episode is from the POV of a different character in the death game. As a narrative trick it’s an interesting conceit, because it prevents the audience from knowing who’s going to make it to the end of the series. And admittedly, I’m partial to stories about deadly games. This one is themed around warriors who each take a name of an animal from the Chinese zodiac.

What I Thought: The premise is that there are twelve families who once every twelve years send a representative of their family to fight in the Juni Taisen (literally: Twelve War). Boar is our first POV character and her father won the last one. Each of the combatant’s swallows a poisoned gem at the start of the competition that will kill them within twelve hours. The winner has to collect all twelve gems and then will be given the antidote as well as the fulfillment of any wish they have. It’s not really clear why every family participates or how they benefit since the wish goes to the individual, but if you just want a killing game with sick rules and hyper competent combatants this dishes it up in spades.

Verdict: I’ll probably be watching. Honestly, with two death game series this season it’s a toss up between this and King’s Game to see which I’m going to stick with or if I’ll manage both. Boar’s backstory was very nicely built and I assume later episodes will similarly build out the rest of the cast. 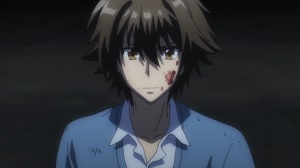 Why I Watched It: The manga version of this has been on my radar for a while (the source novel has not been translated), making this the second death game anime I’m checking out these season. The unwilling players of the King’s Game receive text messages demanding that they complete an action, and gradually the demands become more and more outlandish.

What I Thought: Unusually for a horror anime, our protagonist knows a lot about what’s going on. Nobuaki is actually the lone survivor of a previous King’s Game and he transfers to a new high school where he’s quickly ostracized by the rest of the class when a new game starts up. He knows that everyone who disobeys the King’s orders will die and that it is a supernatural phenomenon rather than a human being, but nobody else believes him, at least initially. I’m curious how this will play out though, because the end of the episode makes such an impression that it feels more like what aren’t they going to do to stay alive?

Verdict: I’ll probably be watching. There are some things that don’t make sense, like why nobody knows about the previous King’s Game (even if it wasn’t written down as due to supernatural causes, the violent and bizarre deaths of all but one student in a class should have been the stuff of national headlines), but I’m curious about how a more knowledgeable protagonist might change the formula on how to survive. 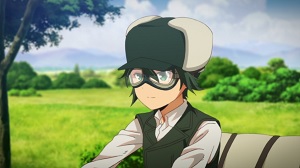 Why I Watched It: Kino’s Journey is based on a long running novel series about a wandering adolescent kid and their talking motorcycle Hermes. Each episode Kino arrives in a new country with new experiences to be had. This is not its first adaptation, and I’ve heard it’s good, so I wanted to see for myself.

What I Thought: Without any preamble, this episode starts with Kino already on the road. They meet up with another traveler who tells them about a nearby country where it’s legal to kill people, and undeterred, they proceeds to visit the country as part of their ongoing journey. Of course, the truth about the town and it’s willingness to kill is the crux of the episode, and Kino leaves unharmed to go on another journey later. On a translation note though, the first episode has character to refer to Kino’s gender as male, but this may have been a translation mistake due to Kino’s age and unisex outfit, since the dialogue itself doesn’t use gender pronouns in Japanese. The previous Kino anime series referred to Kino as female, but that may have been a different extrapolation. It’s entirely possible that Kino’s gender is simply left to the audience to decide.

Verdict: I might watch later. I think I would have loved this show in middle school (the nuance and violence level is probably too high for elementary school), since it features an independant pre-teen who gets to travel all over the place with their trusty motorcycle buddy, a pair of guns, and nobody bats an eye. Unfortunately there’s a lot of other stuff this season that’s more to my taste, but I think this will be an excellent pick for a lot of people.

Recovery of an MMO Junkie 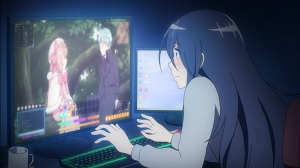 Why I Watched It: The titular junkie is a 30-year-old adult woman, which is not what I expected for a series of this name, but at the same time, I think that’s fantastic, as women are capable of being MMO junkies as much as men (says the former MMO guild leader in me). I’m a little leery that it might lean too hard on stereotypes, but we’ll see!

What I Thought: I did not expect this to be a romantic comedy. After recently becoming unemployed, Moriko gets back into gaming and joins a new MMORPG. Her male fighter avatar Hayashi quickly meets a female healer named Lily who helps her get acquainted with the game and they hit it off, becoming good friends. Though she probably doesn’t know yet (since it’s an online game), it’s clear that Lily is played by a man who lives in the same area as her, and they briefly cross paths while getting ready for their Christmas Eve “date” online. I really like the touches that feel like the characters are actually players in a game. They talk about getting home after work, the guildmaster has to worry about potential drama because two guild members are having romantic issues, and the game has relatable silly parts like taking on monsters that are too high a level or accidentally running away because the player hit the wrong button.

Verdict: I’ll be watching. I like that the writing feels like it was done by someone who has spent a lot of time in an MMO and that the main two characters are crossplaying, since a lot of anime seem to forget that a fair number of the “men” online are actually played by women (the reverse being less surprising).