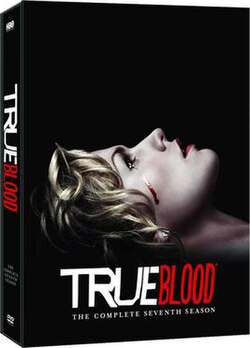 The series as a whole follows Sookie Stackhouse starting shortly after the major world event of vampires “coming out of the coffin”.  Where, after a Japanese company perfects the production of synthetic blood branded Tru Blood, vampires reveal themselves to be real and begin to integrate with mainstream society.  Sookie has always had mind-reading abilities which has made it difficult to keep a human relationship, so she is immediately drawn to the vampires which she can’t mindread.

True Blood Season 6 ended with a world-changing event, the release of the bio-engineered Hepatitis V virus.  Based on a mutation of the Hep-D virus, which only weakens a vampire for a time, Hep V is a much more contagious and much more deadly strain.  Humans who contract the virus show no symptoms, but any vampire that drinks their blood will also catch the virus which causes extreme weakening and eventually the true death.  It was originally spread using tainted Tru Blood so not only are vampires in danger from the virus, they also have lost their synthetic food source.

The season starts 6 months after the end of the last season. Sam Merlotte has become mayor, and Hep-V infected vampires are roaming the countryside in packs.  The human and vampire residents of Bon Temps make a pact to try to get through this difficult time in the hopes of finding a Hep-V cure and untainted Tru Blood production begins again–healthy vampires will protect humans from the ever-hungry Hep-V infected vampires, and the humans will in turn provide their own blood as a food source for the vampires.  This situation, predictably, comes with a lot of tension built into it as many humans and vampires are not satisfied with the arrangement.  A band of H-vamps crashes a human-vampire gathering in Bon Temps as the season begins, and drags away some humans for food.

Meanwhile, Eric Northman has been run off and hasn’t been seen again since the events of last season, and his progeny Pam is looking for him.

This being the final season of True Blood, the show does not pull any punches.  Major characters die, and not always when you’re anticipating or in a way you might guess.  There’s no telling who might survive and who won’t.  The stakes are high as the rampaging H-Vamps are killing humans en masse just to survive, and any of the main vampires in the show could become infected and with no cure available that’s a death sentence.  So much happens in just 10 episodes, and generally I thought they did well giving satisfying conclusions to the characters that felt internally consistent with their history.  I’m not going to lie–I did cry in the final episode, and I’m not much of a crier.