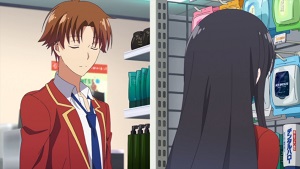 Classroom of the Elite has some nice ideas, but swings wildly in execution. The premise is that Japan has set up a super elite school where every graduate is guaranteed to be accepted to the college of their choice. Though students are not allowed to leave their entire high school career and communication is cut off with the outside, the living facilities are top notch (there’s even a sizeable mall on campus) and every student is given a budget to live on, starting with 100,000 points (the equivalent of 100,000 yen or $900) to pay for their first month’s expenses.

Students are judged as a classroom, based on merit, and points are awarded at the start of each month. Otherwise they are free to do as they like. Several of the first year students of Class D fritter away that first month’s worth of money with the happy expectation that they will get the same amount next month. Others fall asleep in class once it becomes clear that their teacher won’t say a word if they do.

Naturally, this system is not as kind to the students as they initially take it for. Most of the class is close to broke by the start of the second month and not only that, but they’ve collectively failed their exam so badly that they are awarded zero points for the next month’s living expenses. They won’t starve, there are free hand-outs for students with no points, but they won’t be able to buy anything worthwhile, and students who fall too far behind will be expelled. Their instructor reiterates that they must earn their points through merit, and makes it clear to them that anything can be purchased at the school with enough points.

And that kicks off the series. It’s a cutthroat competition between the first year Classes A through D as they struggle to either climb or remain at the top. (Unlike American high schools, where students change classes with every subject, Japanese classrooms are static.) None of the classes are fully aware of the rules of the school, but they are encouraged to compete against one another and naturally Class D ranks at the bottom.

The protagonist is Kiyotaka Ayanokoji, who initially looks like an introverted guy who’s terrible at making friends, and I was disappointed he wasn’t as lame as he appeared to be. There are a lot of protagonists who are supposed to be the “everyman” but Kiyotaka was fun because he lacks the earnestness of a lot of those characters. Instead we had an apathetic everyman who figured he should at least try to make a good first impression to his new classmates and ended up giving himself the blandest introduction possible.

But Kiyotaka has a hidden history the anime doesn’t fully get into, and the upshot is that he’s actually really smart, a great manipulator of people, and probably should be in Class A except that he manufactured his scores on his entrance exam to get himself put in Class D.

We don’t know anything about what the hell Kiyotaka’s actual plans are, even by the end of the series, but if you like watching a guy subtly outsmarting other people, he’s not a bad pick. His bland facade allows him to get away with things because most people don’t suspect anything from him and he’s very good at deflecting credit on to other people.

I ended up liking this version of Kiyotaka as well, but he doesn’t have much of a character arc because of how the anime chooses to present him. Fortunately, secondary protagonist Suzune Horitaka does.

At first she’s a prickly character too haughty to get involved with her classmates. In fact she’d rather the worst of them drop out because she wants to rise to Class A, and her current classmates aren’t going to cut it. But gradually she comes around to believing that she should look out for her classmates and that she can’t do everything by herself.

Class D is filled with the school’s miscreants and all are deficient in some manner, and not necessarily in discipline and study habits. The fact Suzune is there at all points at some flaw in herself, which she is reluctant to acknowledge.

Since both Suzune and Kiyotaka are the cunning ones out of the class, most of the series involves the two of them working together to outsmart the students of other classes and/or save their fellow classmates. Though Suzune is sharp and dominates the earlier episodes, she’s not on Kiyotaka’s level. The more of his backstory comes out, the more apparent it is that Kiyotaka is really the one in control.

I haven’t talked too much about the plot, and that’s mostly because it’s uneven. The good parts, the outsmarting other students, are really good, with an incredible amount of scheming going into the setup for the final episode. But when it’s not operating at peak, it’s usually in a valley, and the worst offender is the pool episode that literally has nothing else to do with the story. I usually can put up with a filler fanservice episode, but episode 7 was so mind-numbing puerile I almost skipped ahead. (The only reason I didn’t was due to fear of missing something important. But there isn’t anything, so skip away!)

Classroom of the Elite is based on a series of novels, and while they haven’t been translated into English, you can guess where at least one of the novel breaks is, since the last four episodes are clearly a contained story arc and there are previous episodes that are similarly clumped. (The pool filler probably exists because they needed to pad the run to avoid starting another book they couldn’t complete.) From a pacing perspective that makes things a little weird as there’s no real season finale, so much as the culmination of a story arc.

Also, because the novel series is very much ongoing, we don’t get a lot of answers. We learn a little more about Kiyotaka as a person, but the school year is not even half over, Class D has made some progress but is still ranked lower than Class C, and everyone else is still scheming. The last episode is a high point, but would be more palatable as a season break rather than an ending without any guarantee that there will be future episodes.

This series has some good moments and a nice concept, particularly for those who like cutthroat scheming by teenagers, but it’s difficult to recommend on account of its lack of resolution and general unevenness. If it eventually has a second season it might be able to pull itself together into something remarkable, but without a way for the audience to continue following the story it’s just unsatisfying.

Minuses: no resolution, quality of episodes swings wildly, the pool episode is a waste of time that has nothing to do with the rest of the series

Classroom of the Elite is currently streaming at Crunchyroll (subtitled) and Funimation (dubbed). Funimation has licensed this for eventual retail distribution in the US.