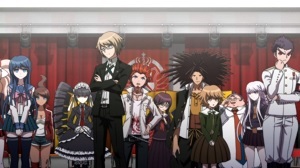 Danganronpa: Trigger Happy Havoc is probably one of the best mystery games I’ve played, and if you aren’t put off by a lot of reading, I highly recommend picking up a copy on Steam or Playstation Vita before watching the anime, since it will spoil everything in an otherwise plot-heavy game. For non-gamers, the 2013 anime offers a more condensed version of the story and it’s a surprisingly good adaptation.

The plot is quickly laid out with fifteen new students waking up trapped inside their elite high school, Hope’s Peak Academy. They are all cream of the crop, being the super baseball star, the super pop idol, the super programmer, etc, with the exception of Makoto Naegi, the main character, who is merely the super lucky, having won the lottery for an average student to attend such a privileged school.

The self-declared principal, in the form of a mechanical plush bear called Monokuma, informs the class that they will spend the rest of their lives trapped in the school, unless they wish to graduate, which is performed by murdering a fellow student and escaping detection in the subsequent class trial, where the surviving students serve as judge and jury. Monokuma gleefully covers the last part as executioner in heavily stylized sequences that would be too gruesome if presented realistically.

The premise initially invites comparisons to Battle Royale, Hunger Games, or other stories where teenagers are made to fight each other to the death, but what makes Danganronpa different is that it’s actually a mystery plot with a truth waiting to be discovered. While killing is heavily encouraged, it’s not mandatory and it’s well within the rules to collectively give up and live peacefully in the school. Some students do end up murdering each other, but the real meat of the show isn’t to witness what people are willing to do for freedom. It’s to unravel the mystery about the school itself.

Danganronpa starts with an absurdly large cast, all named, and helpfully given title cards in their initial introductions, but unfortunately it’s still a bit of information overload trying to keep track of all fifteen students, especially for someone who hasn’t played the game. The Japanese opening credits remedy this problem by presenting the cast and their titles every time they run, but they’re left untranslated in the US release.

That being said, all the characters are distinctively designed, and some of them are quite outlandish, so it’s not hard to visually tell them apart. Once a few bodies start falling, it becomes easier to remember the names and personalities of the remaining cast, and it’s possible to see why the story needs so many characters to start with. With every class trial, the cast dwindles due to the rising count of murder victims and executed murderers.

Anyone wanting to keep up with the body count will want to watch the ending credits, which changes every couple of episodes. Initially it consists of Naegi sitting in a near empty classroom, but gradually fills up as characters die and the smiling figures of his dead classmates are inserted into the photograph. It’s messed up, but very much in line with Danganronpa‘s black humor.

The show is incredibly cagey about who’s going to die when, making it unpredictable who the next victim or murderer will be. The opening credits always display all fifteen students, and no one gets extra focus. The shots of the students riding down the elevator and taking their spots in the trial room has all fifteen alive and present, even though a trial doesn’t happen until after the first murder.

Considering that a big portion of the game involves investigating the murders and presenting evidence, the show does a remarkably good job of compressing the detective work while still giving the audience everything they need to follow the trial.

But this does not mean the audience can necessarily solve the case on their own. New information comes up during the trials themselves as different students offer their personal accounts of what happened and the results of their investigations, which means the audience never comes in with a full tank. It’s realistic, and even happens several times in the game, but can be disappointing for audience members hoping to more actively join in the “whodunit.”

The innocent students have a stake in outing any murderers, because if the murderer escapes undetected, then everyone else will be executed instead. It makes the students extremely motivated to discover (or create) as coherent a truth as possible, so the class trials are among the most important sequences in the series, taking up almost half the episodes.

While the trial debates have a lot of good back and forth spread through all the cast members, probably the most bizarre issue with it for English speakers who haven’t played the game is the strange bullet firing motif that shows up when main character Naegi counters a statement made by another student.

In the game it’s a mechanic where the player as Naegi loads evidence as “ammunition” to counter arguments during class trial debates. It does not literally happen in the context of the story as it only appears in the player interface, but without it, the title Danganronpa, a compound word formed by the Japanese words for “bullet” (dangan) and “rebuttal”(ronpa), would make no sense.

Even knowing this, watching the bullets fire in the anime is probably one of the more groan-inducing parts of the adaptation, because there’s really no reason for it other than to match the title. The show otherwise does a good job in keeping the unique personality of the game, from poses characters like to use, to the soundtrack, to faithful recreations of many of the cut scenes. I love that it keeps the comic book style case summaries to show how the entire crime played out.

Despite being a 13-episode adaptation of a long and convoluted story, somehow director Seiji Kishi manages to get all the necessary narrative bits into place while staying true to the game, which is an amazing feat. Smart decisions were made about where to compress and streamline, without cutting any characters or any of the trials. For the most part, if information is not absolutely necessary (to the point the plot would break without it) it doesn’t show up.

But this also means there’s barely any time to catch one’s breath and get to know the characters. Though some students die early and don’t have an opportunity to become deeper, it becomes more problematic with the longer lasting survivors, since the emotional rally in the final episode works best knowing the kind of people they are and what they’ve gone through both before and during their current situation.

The mastermind behind Monokuma is similar shafted. Though the show explains how the killing game came to be, the why is largely neglected, which removes one of the biggest shocks the game had to offer. The final story arc really needed three episodes but was jammed into two for the original broadcast, and I think it’s telling that the home video release expands the last episode by 14 minutes.

Having seen both the streaming/broadcast version (on first watch) and the home video (on second watch), I can confirm the additional minutes fix my complaint about the mastermind’s motivation and vastly improve the ending.

I highly recommend Danganronpa for its novelty and the surprise twists, but unfortunately the easiest version to experience is the streaming one. It’s not that the original broadcast ending is poor, but as someone who knows what the original was like, it was disappointing to see what was “excellent” downgraded to just “good.”

Even so, it’s stands well enough as its own story, and viewers who have not played the game won’t necessarily be reaching for the wiki. It may be about high school students trying to kill each other, but the mystery slant is a new tack and a fun one to see unravel.

Pluses: Faithful adaptation of the game, crazy plot twists in second half, good at keeping the audience in the evidence loop during trials

Danganronpa is currently streaming at Hulu and Funimation and is available both subtitled and dubbed. Funimation has licensed this for Blu-ray/DVD in the US.

Laurie Tom is a fantasy and science fiction writer based in southern California. Since she was a kid she has considered books, video games, and anime in roughly equal portions to be her primary source of entertainment. Laurie is a previous grand prize winner of Writers of the Future and since then her work has been published in Galaxy’s Edge, Strange Horizons,and Crossed Genres.