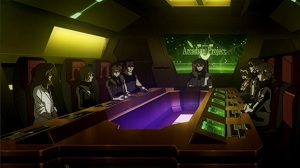 Unfortunate the story is not as strong. Being constrained to an hour and a half, the movie reveals that the Festum were not defeated so much as divided by the destruction at the end of Fafner: Dead Aggressor, though the people of Tatsumiyajima Island have been able to enjoy what appears to have been two or three years of peace.

The eighth graders who were not pulled into service at the end of the TV series are now older and active pilots, though without combat experience, and the survivors of the original series are now veterans, though not without scars.

Though it hasn’t been as long for me between seeing these characters, it was still pleasant seeing how they have matured and moved on. Kazuki and Maya might be a non-starting relationship, but I really like how Kenji and Sakura were still together, even after everything that’s happened.

Very little effort is made to bring anyone up to speed with the TV series. Characters come and go with little explanation of who they are and what they do. Most of the new pilots had previously appeared in the series as potential back-ups so it helped that they did not come out of the blue, with one exception. Akira seems to have been included because someone could not resist having a single mecha piloted by twins.

I realize this is a mecha anime so I can buy into neural-controlled mecha without much issue. Pilot thinks and robot moves. Simple enough. But what happens when you have two pilots and one robot?

No time is spent on how this works or why it is an advantage, and the fraternal twins of different genders, who have problems understanding each other (and don’t have the plot time to figure things out), are tossed in the mecha and they pilot it like it’s no big deal, which I had some trouble buying into. I suspect there was originally a subplot here, since it’s mentioned that their parents were the original pilots of the two-person Fafner, but if that’s the case, the two-person mecha should have been pulled along with it.

All of that is secondary to the fact the Festum have changed due to the events at the end of the TV series. Due to the influence of humans on their psyche, the Festum are trying to annihilate the island (and then presumably the rest of humanity) in greater numbers than before. There is also some creepy weirdness in that not all of the Festum are united anymore. While we saw the beginnings of that kind of schism in the TV series, it’s much worse in Heaven and Earth.

The movie is fine for revisiting characters a couple years down the road and for the visually impressive combat scenes, but otherwise feels more like a light snack than a satisfying meal. Because of the time constraints, the story just can’t play to the strengths of the TV series and its large cast works against it.

It does end on a positive note, pointing towards a possible peace between humans and that which was previously incomprehensible.

The new 2015 TV series Fafner: Dead Aggressor: Exodus is supposed to be set two years after the movie, which is why I watched Heaven and Earth (and the original TV series), but it feels very skippable to me, and if the new series does a good job it should bring newcomers up to speed.

Fafner: Dead Aggressor: Heaven and Earth is currently streaming both subbed and dubbed on Hulu. The subtitled version was watched for this review.