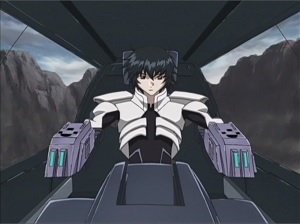 Fafner: Right of Left wasn’t available to English speaking audiences for a long time. Animated back in 2005, it’s the second oldest entry in the long running Fafner series, but never made it stateside, likely due to its status as a direct-to-video prequel.

Right of Left was also skippable when the Heaven and Earth movie came out in 2010, but when the Exodus TV series emerged in 2015, it became clear that Right of Left wasn’t optional viewing anymore, as they made references to characters and the plan that makes up the heart of Right of Left. It was clear I was missing something.

Thankfully, at some point in the past year or so, it quietly slipped into the streaming library at Daisuki.

Right of Left takes place about half a year before the original Dead Aggressor and involves the class ahead of Kazuki and the others who will become the pilots of the first show. As such, we get treated to slightly younger versions of most of Dead Aggressor‘s pilots, back before their worlds got turned upside and raked over the coals.

However, because we know the pilots of Right of Left don’t exist in Dead Aggressor (save for the one who’s killed in the first episode), it’s a safe conclusion going in that Right of Left is going to be a downer. Some tissues may be needed.

Right of Left doesn’t spend much time worldbuilding and largely runs with the assumption that people have seen the original Dead Aggressor, and having been a direct to video release, that would have been a safe assumption. The story primarily follows two students, Ryo and Yumi, who become Fafner pilots at a critical time when their home, Tatsumiya Island, is about to be discovered by the alien Festum.

Their core is not fully developed yet (that happens in Dead Aggressor) and if it comes into contact with the the Festum, it will become corrupted. Not to mention that having aliens hellbent on wiping out humanity finding the island would be bad in general.

The island’s adults decide that they have no choice but to activate the experimental Fafner mecha and undertake a dangerous operation codenamed the L-Plan, which involves a decoy vessel to lead the Festum away from the island (Tatsumiya is mobile artificial island, so the L-Block is essentially part of the island sailing off on its own).

The sixty days of the L-Plan are arguably the most intense parts of Right of Left as we see the days count down as the staff and pilots have no idea how they’re supposed to survive. Because the Festum can read minds, none of the participants are allowed to know the full plan to prevent their enemy from outsmarting them. They only have four Fafners, and the pilots take shifts to avoid being assimilated by the alien technology they’re using. But then they start losing pilots, and they start losing mecha. They start losing hope.

This makes Right of Left a grueling watch, even if we never get the know the names of most of the dead. There comes a point where the remaining crew members are wondering if they are even intended to make it out alive.

Their mission does succeed in the end, because this is a prequel and Dead Aggressor still happens, but it is not a happy story. While Right of Left is very short and cannot afford to spend much time with any of its characters, Ryo and Yumi are relatable and worth getting to know for the brief time we are with them.

I recommend this to fans of the original Fafner: Dead Aggressor, but it is not an entry point for new viewers. Of all the entries that followed the original, Right of Left is quite possibly the strongest regardless of being the shortest.

Pluses: palpable sense of dread, excellent building of sympathy for main protagonists in such a short span of time

Minuses: no time for character building for anyone else, technical explanation for why the diversion plan should work isn’t fully covered

Fafner: Right of Left is currently streaming at Daisuki and is available subtitled (or totally unsubbed if raw Japanese is preferred!).