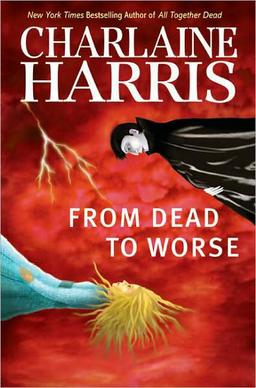 From Dead to Worse is a romance/mystery/horror novel from 2008, the eighth in the Sookie Stackhouse series of novels by Charlaine Harris (which is the basis of the HBO show True Blood).  The previous books are all reviewed here earlier on the Diabolical Plots feed.

After surviving the deadly bombing of the vampire summit, and surviving the aftermath of Hurricane Katrina, Sookie just wants things to get back to some semblance of normality.  But her boyfriend Quinn (a weretiger) is missing, she learns that she is descended from fairies and meets her great-grandfather who is fairy royalty, she is recruited to help investigate a series of mysterious werewolf disappearances, and the vampire King of Nevada seeks to wrest control from the wounded and bankrupted Queen Sophie-Ann of Lousiana.  So, well, I guess that is normality for Sookie.

Another action-packed book with a lot of threads all tied together in it.  I especially enjoyed seeing the vampire power struggle because up until now the vampire hierarchy has been relatively stable despite knowing that vampires have a tendency for violent scheming.  All Together Dead (the previous book) is a really hard one to top in the series, and I don’t think this one did, but it was quite good, interesting throughout.

My one pet peeve is that Sookie seems to have a tendency to call just about anything a “war”.  A dozen werewolves get into a fight that is over in less than an hour?  That’s a war, apparently (I would call that a battle).  And so, when Sookie promises in the narration that there’s going to be a war, the result is anticlimactic, finished within a chapter.