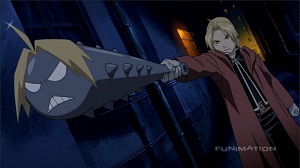 Fullmetal Alchemist has been around since the early 2000s. It was one of those anime series famous enough that it was hard to be a fan and not have heard of it.

In 2009, a few years after the first FMA wrapped up, it was rebooted. That felt unusually soon, but the first series had deviated heavily from the original manga (at the creator’s request, since the manga was still ongoing) and the second series was going to be true to the soon-to-be ending manga. The buzz around the second series, titled Fullmetal Alchemist: Brotherhood in English, was even stronger than the first one.

But I didn’t think much of the two teenaged protagonists. What I knew was that Edward and Alphonse Elric had tried to resurrect their dead mother through alchemy (that never goes over well) and as a result of that botched attempt Ed lost his right arm and left leg, and Al lost his body so his soul had to be bonded to a suit of armor. Much of the story involves them searching for a way to become whole again, and I wasn’t really interested in following two teenagers trying to fix themselves after having done something horribly stupid.

Fortunately, Fullmetal Alchemist: Brotherhood is a lot more than that.

Manga creator Hiromu Arakawa has built a world that invokes the look of 1930s England, with cars, telephones, radios, and trains; a world where alchemy is considered a science. The country of Amestris lives and breathes independent of the Elric brothers’ existence, which allows the series to be so much more than two teenagers trying to fix a childhood mistake.

I’m sure Ed and Al do well enough with their target demographic of pre-teen and teenage boys. They’re incredibly talented and kick-ass for their age with just enough emotional insecurity to make them relatable. Much of the show’s humor centers around the antics of the two of them, and Alphonse’s animations are adorable when he’s out of sorts (though Ed’s sensitivity about his height is a little overdone the first few episodes). But for me, it’s the parallel conspiracy story that gets me going.

The brothers are searching for a way to restore themselves and a possible key to that is finding or creating a philosopher’s stone, which magnifies an alchemist’s ability. Normally alchemy requires an equivalent exchange; alchemists cannot create something out of nothing. Since a philosopher’s stone reduces or outright negates the need for exchange, it’s a highly desirable object for alchemists beyond the Elric brothers.

This sets up the parallel storyline.

While the Elric brothers are dealing with their own issues on the center stage, there is another story involving a conspiracy within the military, philosopher’s stones, and a civil war from six years ago. The two overlap from time to time, and eventually merge later in the series, but for the first half of the series the Elric brothers are largely in the dark or only tangentially involved with what’s going on.

This segment of the story is spearheaded by the ambitious Colonel Roy Mustang who understands that there is something rotten in his country’s military and he intends to root it out. Roy’s storyline is fascinating to watch, because he’s very aware he’s playing a dangerous game against an unknown enemy who outranks him, and his enemy is equally aware that Roy is getting too nosy for his own good.

Roy plays his moves intelligently and shoots for the long game; so long that his real agenda doesn’t even come out until halfway through the series (a rarity for a protagonist). And since he’s not the titular character (Ed is the Fullmetal Alchemist) the moments when he finds himself in trouble are a lot more nerve-wrecking since there’s less of a guarantee he’ll make it out intact.

The two plots connect through the Elric brothers’ pursuit of a philosopher’s stone and because as a state alchemist Ed reports to Roy Mustang, though Roy seldom gives him any direct orders or involves him in any of his plans (probably because he knows the Elric brothers are uncontrollable wild cannons). Roy himself is also a powerful alchemist, specializing in fire.

I have a suspicion that the manga writer/artist made Roy too powerful a secondary protagonist because he frequently gets hamstrung in ways that keep him out of the action. While the Elric brothers often start fight scenes at full strength, Roy is usually wet (he can’t start a fire when damp), crippled, or both when faced with a potential battle. When he finally does get some action in, it ends up being one of the most badass scenes in the first half of the series.

This isn’t a show that I would have watched on my own, but it’s better than I expected and I can see why it was so popular. The use of alchemy throughout the series is not only well designed and integral to the story, but allows for some creative problem solving that just wouldn’t be possible for protagonists in most other series. Given the 1930s setting, this can mean knowing the chemical composition of what they’re transmuting. It feels very smart.

Though Ed and Al aren’t my typical cup of tea, I don’t dislike them, and they eventually grew on me by the end. But I would have found the series more difficult to get into if Roy had not been working in the background. I really needed that more mature storyline and the element of danger and uncertainty that came with it. It’s a bit of a shame that when their enemies become one that Roy’s role becomes diminished in much of the third quarter of the series (more hamstringing), though he bounces back in a spectacular way by the end.

I wasn’t entirely satisfied with the grand revelation of the villain’s plans at the end of the story, but I can’t deny that the final episodes demanded to be watched one after another. What comes together in this series is greater than the sum of its parts. It’s probably one of the best I’ve watched in a long time.

Minuses: Ed and Al feel like they’re unconnected to the greater storyline in the early episodes, the final villain’s motivations don’t quite come together

Fullmetal Alchemist: Brotherhood was reviewed on Blu-Ray and watched in the original Japanese with subtitles. The first four episodes are available for free both subbed and dubbed on Hulu.