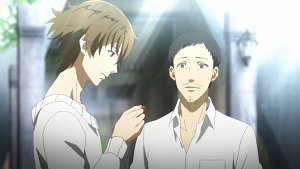 Hakata Tonkatsu Ramens has a ridiculous premise, but once you buy into it, it’s a lot of fun. Hakata City, within the Fukuoka Prefecture, is city so populated with hitmen and other criminal elements that they’ve essentially organized into businesses. Not public facing, mind, but this is the kind of show where in the first episode a hitman finds out someone else has already killed his target, because, well, hitmen are just that easy to hire. (I imagine people with enemies don’t last long in Hakata City.)

Private detective Banba and genderbending hitman Lin are the two most prominent members of the cast, and following their story is the first arc of the series, but the first arc also introduces their fellow miscreants and the show becomes an ensemble after that point.

The cast is very good at what they do, but they sell themselves as people first, rather than what their jobs could have made them. Jiro might be in an unsavory line of work, but he’s an attentive father (even if his daughter sometimes accompanies him on jobs) and a generally cheerful man. Maru’s enthusiastic about trying to find work appropriate for his skill set (torture is his preference, but he also avenges people for pay) and there’s something about him posting a job listing at shadyjobs.com telling people to ask about his rates that makes me laugh.

This is the sort of show where one character is visiting the doctor (who does body disposal), runs into a second character who is the middle of getting rid of a corpse, and then asks if he can use that corpse for a different job.

A series about criminals, whether they’re hitmen, information brokers, cleaners, or other unsavory things could have gotten really dark, and make no mistake they do their jobs pretty efficiently, but instead we end up with a group of friends who go out eating and drinking together after a long day and play baseball on the same club sports team. The series title comes from the name of their baseball team, Hakata Tonkatsu Ramens. It helps that anyone killed by the primary cast are other criminals with a lesser sense of camaraderie.

The one thing that really sticks out though is that there is a dearth of female characters, even among the less prominent members of the baseball team. Jiro’s elementary school-aged daughter is the most frequently recurring female character and there are only two others with speaking lines who appear in a handful of episodes. In a way it feels like Lin’s penchant for wearing women’s clothes only exists because otherwise they wouldn’t have someone in a skirt for the promotional images.

I do want to talk about Lin though. He identifies as male and he’s straight (he doesn’t like getting hit on by other men), but he likes to wear women’s clothes. The rest of the main cast doesn’t give him any crap about it. Rather, they just treat it as his particular fashion sense. I’m not entirely sure anyone in the core cast even brings it up, which is refreshing. The team does use him as bait on occasion because he can pass as a woman as long as he’s not talking in his regular voice (which is deep and unmistakably male), but that’s about the extent of acknowledging it.

Hakata Tonkatsu Ramens is based on a light novel series, and I suspect there were three or four books used to make this anime since there are four storylines, the two in the middle being the shortest. Because of that, the show doesn’t have an overarching plot, but rather distinct mini-arcs covering different problems.

Though the novels are still ongoing, the anime is entirely self-contained. It’s not the type of series that beggars a resolution (there is no master organization to take down, no big bad who must be defeated) so even though it ends on an arc rather than a dramatic episode that ties together everything that came before, it still feels more than satisfying.

I recommend Hakata Tonkatsu Ramens. It’s not Baccano levels of madness, but if you like humor with your hitmen it’s pretty good.

Pluses: Great sense of humor, memorable cast of characters, genderqueer Lin is treated as just another part of the team rather than constantly having attention drawn to his choice in clothing