When Percy and Astrid met they’d no idea that only a few short weeks later they’d be getting married.

“Percy really swept me off my feet” said Astrid. “I’d just stepped outside the pub for a quick smoke and suddenly this guy was bundling me into his car.”

“It was love at first sight,” Percy confirmed. “I saw her and I just had to have her.”

Despite their unconventional first meeting our October couple are obviously very much in love. Sitting in their home, admiring the various objects of cult paraphernalia, including an antique sacrificial dagger, it’s also obvious that this was never going to be a normal wedding.

“We never really discussed it, because the cult is so important to Percy that I just took it for granted that the wedding would be a dark ceremony honouring the Elder Gods.” Astrid says. “Also, as I spent the weeks building up to the wedding locked in a cellar most of the preparations had to be done by Percy and I wouldn’t have felt comfortable asking him to compromise his beliefs when he was having to put in so much effort to make the day perfect.”

“Astrid was incredibly supportive.” Percy gives her a quick hug. “She even agreed to convert to the cult of the Elder Gods, which was something I’d not dared hope for. I’d had a few previous engagements which I’d had to break off once the bride realised what the cult involved, but Astrid just went for it.”

“Killing the owl was difficult,” said Astrid. “But it made for a really memorable hen night. Percy’s mother helped mix the cocktail of laudanum, owl blood, and gin that’s part of the traditional cult initiation and I don’t remember much of what happened afterwards, but I woke up covered in feathers and children’s teeth so it must have been a good night.”

While Percy’s wedding suit was fairly traditional cult attire, including a mask made out of broken dreams, the couple wanted the wedding dress to be a bit more personal. Astrid’s confinement made fittings difficult, but the final gown was still something spectacular.

“I think everyone worries about the dress.” Confided Astrid. “I was definitely one of those girls who cut wedding dresses out of magazines and I’d always seen myself getting married in something big and white.” So the vintage lace dress was something of a departure. “Percy’s mother brought around a trunk of old dresses, including her own, which was a long Bohemian number from the seventies. Sadly we had to reconsider because of the blood stains, but we salvaged some of the lace from the sleeves and used it for my hairpiece.’

“The dress I eventually chose was a real one-off. We think it might have been made for a great aunt, but the pictures of the wedding it was worn at have all been defaced so it’s only a guess. I was worried that it might seem a bit ordinary, but the rotten seams and mildew stains helped lift it above what you’d find on the high street.”

Percy chose the venue in accordance with the rituals necessary for the cult ceremony he’d always dreamed off. “Several people commented on how isolated the chapel was. Although it did make things easier from the point of view of parking, and it was very convenient for the reception which we held on the beach. The most important thing about the venue for me was that it was in the same place that I’d been having premonitions about since I was a small child. Nightmarish visions can be tricky things to pinpoint, and it took me several years of investigation before I found the perfect venue. When I told my mother she laughed and said I should have just asked Uncle Norman, as it’s the very chapel he was baptised at. There’s a funny story attached to that, because shortly after he went mad and murdered his twin brother.”

“The family connection is very important to Percy,” Astrid interrupts. “He went to a lot of trouble to ensure that my family were present at the ceremony, even chloroforming my dad when he objected to being kidnapped. We want to have a big family in the future and by making the wedding so family-oriented. I hope we’ve started off on the right track for that.”

The wedding was officiated by Mordiggan, a deity chosen by Percy due to a longstanding family connection. “It did mean we had to advise the guests to close their eyes during the ceremony, as any sighting of him causes blindness. The photographer had a particularly difficult job, and sadly didn’t survive, but he did get some beautiful shots of the service.” Indeed one of these was our cover for this month. The ominous dark cloud that stands at the altar while Astrid and Percy exchange rings gives a real sense of atmosphere, and it’s hard to fault Percy for risking his guests’ eyesight when the end result is so impressive.

While the wedding ceremony was a small affair, the reception was even more select, something most couples would consider unusual. But for Percy and Astrid the process of culling the guests was a core part of their day.

“I think we were both a little wary of how our friends and family would perceive Astrid’s newfound religious zeal,” admitted Percy. “There was a lot of talk of brainwashing and some mentions of the police, although the local police force is very sympathetic to cult members and we’d paid the usual bribes.”

“Percy and I didn’t want anyone at the reception who wasn’t really celebrating with us.” Astrid takes over as Percy seems visibly upset by the idea of anyone doubting their affection for each other. “The ritual culling wasn’t something I’d ever heard of before, but it’s part of Percy’s religion and I thought it was a good way of symbolising our new life together.” For those who aren’t adherents, the ritual culling is a ceremony in which guests are pursued and slaughtered by beasts. A small number of guests survive, either by luck or prior knowledge, and these are then invited to the reception. “Percy choose to have the pursuit led by his father, who owns a pack of dire wolves. The slaughtered guests were then dismembered and their brains and hearts used to adorn the wedding cake.”

The cake was a custom-made four-tier chocolate cake from a local baker who specialises in catering for occult ceremonies, so were well aware of the need for discretion and dark ritual.

“Chocolate cake was the one thing I was adamant about,” said Astrid, “as I’m a huge chocoholic and I didn’t want to go without on my big day. The caterers covered it with ganache, but otherwise left it bare so it could be decorated with the spoils of the hunt. We had to offer a tier to Cthulthu, along with the remains of the dead guests, but otherwise it was sliced up and handed round. As is tradition, the blood of Percy’s family and mine had been mixed into the batter so the consuming of the cake really brought us closer together.”

“Sadly Astrid’s father was one of those who died during the culling, but we placed his heart on the very top of the cake so that we could both take a big bite and make sure he’s with us in the years to come.” Percy gives Astrid a hug as she wipes away a tear at the memory. “It’s a huge shame that so many of Astrid’s close family died on the day, but I like to think that they’d have been glad to know that their sacrifice helped ensure a happy future for us both.”

The reception was held on the beach as is traditional for cult weddings. The summoning of Cthulhu that formed the climax of the evening can only be done in an area next to tidal waters and while it might have been possible to hire a local pier Percy explained that he’d been reluctant to do so due to the likelihood of losing his deposit. “Cthulhu does tend to cause damage, and while there are some local venues which are sympathetic, most of them will charge for broken windows and bloodstains.

“Despite living only a short drive away Astrid had never before seen Cthulhu, so the reception was extra special as it meant I got to introduce her to the Elder God as my wife, as well as see the horror on her face that all new initiates experience.”

“It was really terrifying.” Astrid nods. “Percy had said a lot about how important it was to him that Cthulhu accepted me, and I think I’d just built it up in my mind to something which made it a lot scarier than it really was. There was all the stress of having just gotten married and then having had to run down a cliff while being chased by dire wolves and seeing this huge tentacled dragon-man-thing emerge from the sea was sort of the last straw.”

“She went a little mad, but luckily my mother had remembered the straitjacket and once Astrid had been restrained she calmed down a lot.”

“The laudanum helped.” Astrid giggles. “I felt so stupid once it was all over, but Percy didn’t mind at all.”

“I’d been to a few weddings where the bride really lost it. My cousin Irene cut off her husband’s fingers and ate them, so Astrid was pretty unfazed by comparison. I don’t think you can expect everyone to adapt to the Elder Gods in the same way, especially if they’ve not really been part of your upbringing.”

It seems a bit unfair to ask if Astrid has any concerns about that difference in upbringing now, especially when they make such a lovely couple, but her words on the subject are an inspiration to any young bride in a similar situation.

“Everything before the wedding was such a whirlwind that I didn’t really have time to sit down and think about what was happening, but since then I’ve been on a few retreats and had my mind eaten by Shogothath and that’s made a real difference. I guess my advice to any bride in a similar situation would be to not panic, and remember that you’re needed for breeding. If the Elder Gods are going to eat anyone it’ll be the groom.” With that Astrid smiles and turns to Percy and as they exchange a heartfelt kiss we bid them adieu.

Author’s Note: The story was inspired by a conversation at a friends wedding about the different types of wedding you could have and how a fancy wedding magazine might cover them.  (The friend’s wedding was very nice and no one was sacrificed) 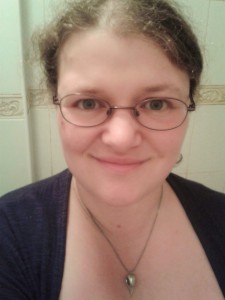 Emma McDonald has been writing for years, but this is her first piece to be accepted for publication.  She usually writes regency era stories with a touch of magic and the occasional vampire – and generally uses this as an excuse to visit English Country Houses for research.  Her website is at www.emmamcdonald.co.uk and she’s on twitter as @telute.