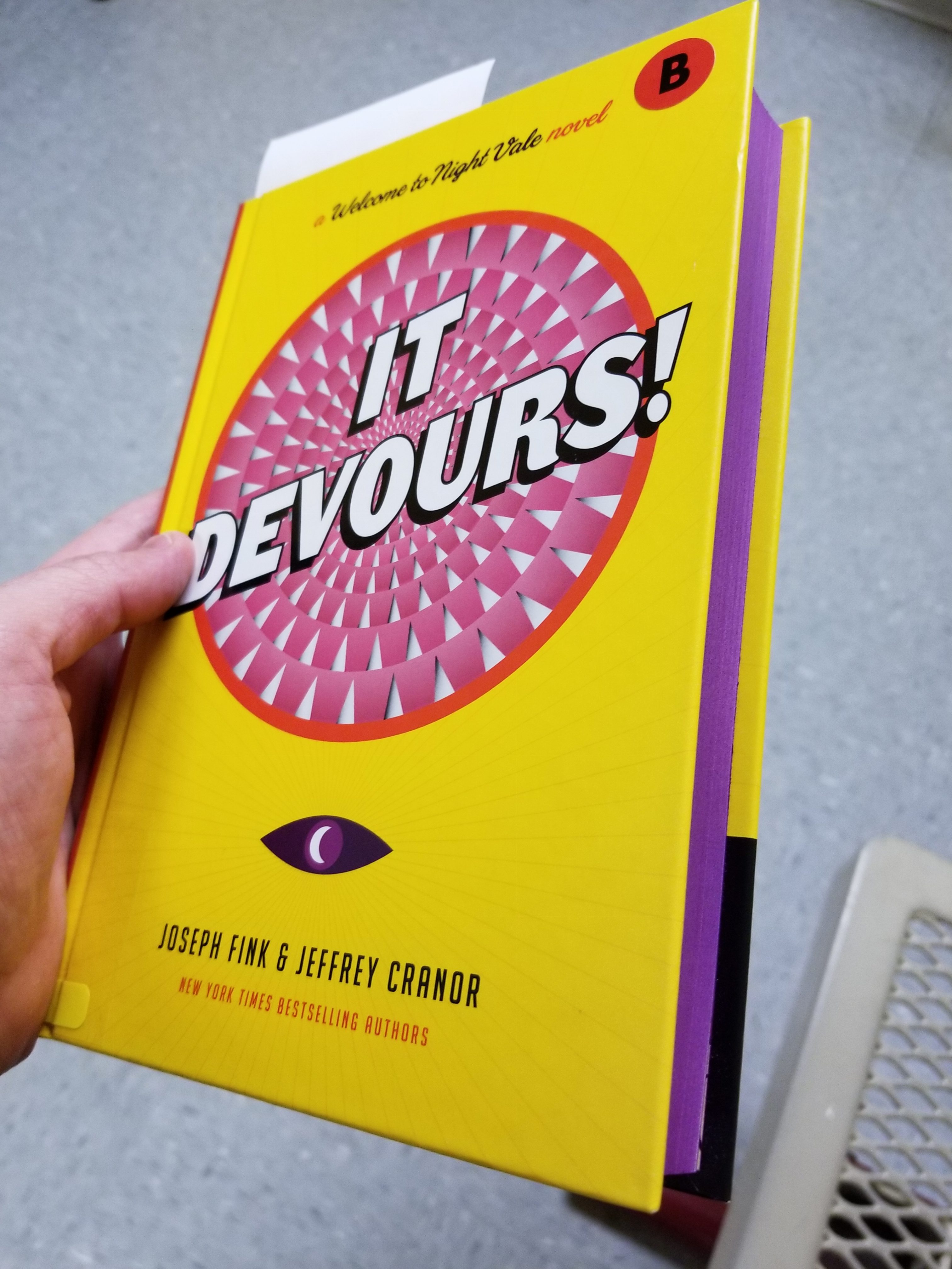 Nilanjana Sikdar is a scientist and a member of Carlos’s team in Night Vale, which Carlos calls the most scientifically interesting town in the world.  The team performs very important experiments, such as making machines that go flash and then bang, or measuring the effects of being disappointed in potatoes.  Nilanjana does experiments that involve growing bacteria.

Disaster strikes in Night Vale.  Not that it’s… all that unusual for some kind of disaster to strike, mind you, but this is a very mysterious disaster which no one understands.  Giant holes have been opening up and swallowing random bits of town, and the local chapter of the Church of the Smiling God is rumored to be responsible.  Carlos tasks Nilanjana with investigating the phenomenon to find out what is causing it and how to stop it.  On her first visit to the church, she meets Darryl, one of the church’s most committed members and strikes up a… friendship?  Or is it a romantic relationship?  Or, wait, maybe it’s all just a pretense, there’s something weird about Darryl and the way he smiles…

It Devours continues the oddball comedy horror that the Welcome to Night Vale podcast and prior novel are known for, and it does a great job, as ever.  Like the prior novel (and unlike the podcast) it does take the form of a more traditional narrative arc instead of being the shapeless semi-plotted form that the podcast takes.  You don’t need to have listened to any episode of the podcast, nor read the prior book, to enjoy and understand this one, though you might miss a small amount of in-jokes.  This one takes on one of my favorite topics, where science meets religion, with our two main characters being a scientist and a religious devotee, and has some interesting thoughts on the subject.

Also, I don’t often think much about book design besides just cover art, but this has a really eye-catching book design with the bright yellow cover, the purple-edged pages, and the toothy inlay.

It is eligible for the Hugo and Nebula awards this year (and is on my personal ballot for each). 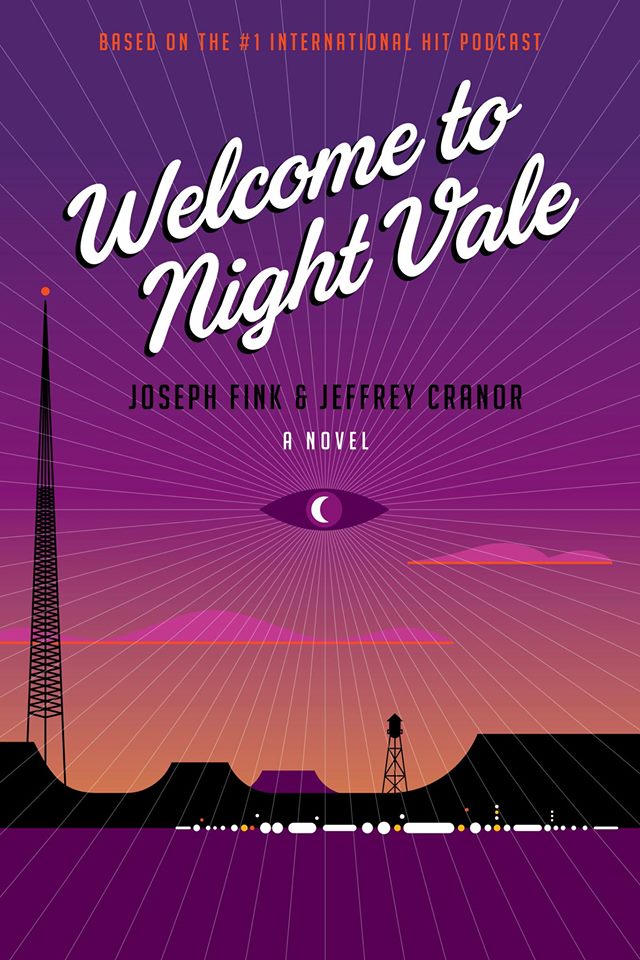 Night Vale is a mysterious small town in the American Southwest, a place of monsters, alternate worlds, angels, and any other manner of goings-on.   This book tells the tale of two women living in Night Vale. The first woman is Jackie Fierro, a nineteen-year old owner of the town’s pawn shop.  She has been nineteen for a long time, as long as she can remember.  One day she is visited by an utterly forgettable man in a tan jacket and carrying a deerskin briefcase who pawns a piece of paper that says “KING CITY”.  Jackie can’t let the piece of paper go.  Literally, she can’t make the paper leave her hand–she can drop it, burn it, soak it in water, and it will always be in her hand again entirely intact.  What does the paper mean?  What is it for?  Who is the man in the tan jacket?  The second woman is Diane Crayton, PTA treasurer and mother of  shapeshifting son Josh.  Lately Diane has been seeing Josh’s estranged father everywhere she goes, and at the same time Josh has started to voice interest in this man he’s never met.  Diane and Jackie both go searching for answers, and cross paths with each other in their search.

The book is based in the world of the popular Welcome to Night Vale podcast, which is formatted as a community radio show that takes place in this weird desert town (I wrote up a podcast spotlight for this a couple weeks ago).  The book is both similar and very different.  Similar in that it has the same weird feel to it, the same tendency to be very appealing not only in strange events but in odd turns of phrase in the narrative.  And there are characters that you may recognize from the podcast as well as references to past events from the podcast.  The community radio show that is the podcast is mentioned more than once, as well as being represented in short inter-chapter sections that are radio transcripts.  But overall it is also very different because, unlike the podcast, the book is structured as a narrative rather than a news program.   Since the podcast takes a form that wouldn’t translate very well directly to a full book, this was the main thing I was wondering about when I heard about the book release, but the authors pulled off the different format very well while maintaining the same feel.

You can pick up the book as a standalone and read it, and you will be able to understand it.  Without the three years of the podcast’s history in your mind, you will miss some in-references, but I don’t believe there’s any point in the book where the plot hinges upon an unexplained reference.  If you think that you might want to listen to the podcast, keep in mind that the book will contain spoilers for the events of the podcast– this might or might not be a big deal to you, as much of the appeal of the podcast is not plot-centered, but if you do want to be surprised by new developments in the podcast as they happen, just keep that in mind.

I am a big fan of the podcast. I only picked it up last year, but I’ve caught up on the three-year backlog in the meantime.  I love the podcast, so much weird good fun.  And I love this book for all its similarities and differences.  There is so much here to love: sympathetic characters, oddball ideas, humor.  I highly recommend picking up the book.  If you want a taste of the kind of writing first, listen to some of the podcast episodes for free to get a taste.  I hope this books is a huge success so that there will be more books to follow.

Welcome to Night Vale (produced by Commonplace Books) is a fiction podcast, but quite different from any of the other fiction podcasts I listen. Most of the others publish short stories by different authors, where each new story has nothing to do with the others and is written by a different author.  The easiest way I can describe the podcast is that it is a community radio show ala Prairie Home Companion, but one which takes place in a mysterious sleepy little town ala Stephen King or HP Lovecraft.  If that sounds like something you’d like, you probably will!  If you’re not sure what to think about it, download a few episodes for free and give it a try.

The format of the show is a wonderful idea, one of those wonderful things where a clever person takes two familiar but disparate elements and melds them together and somehow the whole thing is shiny and new.  The idea is nonsense.  Wonderful, hilarious, weird nonsense of the best possible kind.  The show is written by Joseph Fink and Jeffrey Cranor.  After three years they’ve still managed to keep the show fresh and interesting, introduce new weird elements that keep everything interesting.

The main voice actor of the show is Cecil Baldwin, who plays the host of the radio show (whose name is Cecil Palmer).  Most episodes are mostly his voice, announcing the strange news of the town, traffic (which is often very unrelated to traffic), community calendar, sponsors (which are usually real companies but just made up parodies rather than actual ads), and the weather (which is actually a track from an indie musician, a different one every episode).

There are numerous guest stars scattered throughout the three years of the show, including Dylan Marron, who you might know from the Every Single Word tumblr page where he posts edited versions of feature movies cut down to only the parts spoken by people of color (a very clever and illustrative project for what an issue that is).  Wil Wheaton and Retta both have recurring roles on the show, and a number of other actors that I have only come to know through the show itself.

The show has grown hugely in popularity.  They have toured across the United States and Europe, and are now planning their first tour to Australia and New Zealand.  A book written by Fink and Cranor, also titled “Welcome to Night Vale” is scheduled to be published on October 20.  (I have read the book and will be reviewing it right here on October 19, so check back).  The live shows have a somewhat different feel to them–I would recommend listening to the podcast before attending because the show that I went to felt like it was aiming mostly at people who were already familiar with the world of Night Vale.  Also consider checking out their merchandise store which has a lot of excellent stuff that is meant to appeal to fans of the show–I have been meaning to order a Boy Scout badge for “Subversive Radio Host” among other things.

I love this show.  I think it can appeal to a lot of people, SF fans or otherwise with its strange brand of humor and weirdness.  I hope it lasts a long time and expands into new and exciting things as it goes.