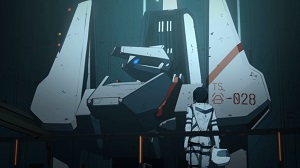 Knights of Sidonia is one of the few anime series in recent years that was brought over to the US, but never simulcast. While I heard the series was good, it missed a lot of the seasonal round-ups because no one could watch it during its original airing.

I finally had the opportunity see it and decided to give it a shot, even though I heard that the second half doesn’t hold up to the first.

If you like hard science fiction in your anime though, the first half will entertain you plenty, as a lot of things that go unaccounted for in other series (like the fact a combat pilot in a cockpit needs some way of urinating without ruining his spacesuit) are called out and accounted for.

The sheer grittiness of the characters’ situation calls to mind similarities to 2013’s hit Attack on Titan. Once again we follow the last known bastion of human civilization, fighting a relentless enemy that cannot be communicated or reasoned with. Characters are introduced and wiped out, and tough decisions are made between the lives of a few or the survival of humanity.

For unknown reasons, the spaceship-sized aliens called gauna attacked and destroyed the Earth centuries ago, scattering what remained of humanity on hundreds on seed ships. As far as the crew of the Sidonia is aware, they are the only remaining ship and they have just 28 kabizashi spears, which are the only weapons capable of piercing and destroying the core of a gauna, preventing their regeneration.

Due to the devastation caused to Sidonia in its the last war with the gauna and the loss of food processing facilities, children born in the past hundred years have been genetically modified to photosynthesize and only eat normal food about once a week. In order to rebuild population numbers, there are also a number of clones and humanity now has a third gender, which eventually develops into male or female depending on the partner they choose.

Knights of Sidonia is animated almost entirely by computer. Though the character designs reflect the old hand-drawn anime style, it’s often possible to see how they look a little “off” due to being computer models, but using CG has its advantages. The Sidonia has been sailing for at least six hundred years, and the ship, the mecha, even the pilots’ suits have a scuffed, lived-in look that would have been hard to conventionally animate.

The story follows one particular pilot, Nagate Tanikaze, who has a history he (but not the audience) is largely unaware of. Though he starts out an oddity for his inability to photosynthesize, he turns out to be a fantastic pilot, largely because he’s trained in a simulator since childhood to use one particular model.

Nagate ends up having other advantages in his court, but at least in the first half of the show, it doesn’t feel like he’s a superhero so much as extremely competent. He might be a hero who comes out of nowhere, but there’s a foundation for it and winning battles is a team effort. By the second half it’s a little more wearing as Nagate is the one who gets all the mecha upgrades, and gets to do all the cool stuff, when one would think the Sidonia would spread the love around with their other pilots.

Since the show does not cover the full length of the manga, it ends on a major combat victory rather than a story arc, leaving the intentions of several characters unanswered. The second half of the show in particular feels like someone hit the fast forward to make sure the story hit that battle before ending.

It’s not that the plot feels rushed so much as details are glossed over and the fallout of certain actions don’t feel fully considered. Things that ought to be a major power shift just happen and everyone accepts it.

Knights of Sidonia is also oddly two-faced about its treatment of women. On the one hand there are no shortages of capable women, from the most senior combat pilot on Sidonia, to the ship’s subcommander (effectively their battle tactician), to the Sidonia captain herself. Uniforms are practical and nobody questions their skills or position on account of gender.

But there are several shots of female characters photosynthesizing (which requires nudity). They aren’t particularly male gazey since the shot may be in the distance or focus on their faces, but this never happens with the men. Also, just about every female or potentially female character in Tanikaze’s social circle seems to dig him in a potentially romantic manner.

If anyone’s emotions override their sensibilities in combat to the point they’re sobbing and not listening anymore, it’s always a female pilot, so while some women in the show kick major ass, there are times that feel like the writer needed someone to be emotionally broken up so he picked one of the women. There’s one early female pilot death that had me shaking my head because given her rank she should have been made of sterner stuff.

Unusually for anime, there is also a non-binary/third gender character, though the English subtitles don’t treat them particularly kindly. When Nagate has trouble figuring out their gender, Izana says people like them aren’t specifically male or female, instead taking on characteristics of the opposite gender when they choose a partner.

Unfortunately, the subtitles (and presumably the dub) default to referring to Izana as “she,” most likely because Izana sounds like and is played by a woman. The only character who specifically refers to Izana as a “he” is another woman, specifically because she doesn’t want Izana to become fond enough of Nagate to transition, but technically Izana isn’t either. This would have been less of a problem in Japanese since it’s not a gendered language and it’s very easy to talk about someone in the third person without revealing whether they’re a man, woman, or something else.

It feels like a terrible case of miscasting though, because Izana’s voice is so female that when I first saw them I didn’t realize the reason Nagate was staring was because he couldn’t figure out their gender. Izana has a slender build and stands the same height as the other female characters, with the primary difference being a flat chest, and that wasn’t enough to visually read as third gender. In retrospect the only way I might have known otherwise is that Izana’s cadet uniform is not the one worn by women.

Considering that there are many Japanese women who play convincing teenage boy roles in anime, it’s disappointing the casting director couldn’t have found one for Izana, which would have helped give the viewer the same impression as Nagate.

Though I wish there was a legal free streaming option, I have to admit that Netflix made a good choice for their first exclusive anime license. The platform promotes binge-watching, and Knights of Sidonia ends on so many cliffhangers it’s definitely suited to the format.

Minuses: inconclusive ending, later episodes make Nagate too much of the ace pilot everyone relies on, English translation’s handling of Izana is very clumsy

Knights of Sidonia is currently streaming at Netflix (subscription required) and is available both subtitled and dubbed. Sentai Filmworks has licensed this for Blu-ray/DVD in the US.