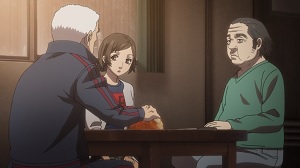 I really wanted to like Kokkoku. I really did.

The setup in the very first episode has a lot of promise. Juri Yukawa is a young woman, newly graduated from college, and she’s from a middle class family that has fallen on hard times. Her mother is still working, but her father has been laid off. Her grandfather is retired, her older brother is unemployed, and her older sister is a single mother with a child she had with a man who has since exited her life.

All four generations of the Yukawas live in the same house and Juri feels like she needs to get out of town before she ends up going nowhere like almost every other adult in her family. She knows she’s not that special. None of her job interviews locally have resulted in any offers.

Though her family is not entirely functional, they dote on Makoto, the son of Juri’s sister, because out of everyone, he’s the one most likely to have a future, so it’s because of Makoto’s kidnapping that the entire story is kicked off.

Initially the kidnapping looks like it’s just for money, and Takafumi, Juri’s father, thinks they can scrounge up the funds from the family savings, but they’re both stopped by Juri’s grandfather (who oddly never gets a name–he’s just called “Grandfather” or “Father” depending on who is speaking to him). Her grandfather has a secret that he’s never shared, and he undergoes a ritual together with Takafumi and Juri while using an old stone heirloom and a drop of his blood.

This takes the three of them into what he calls the stasis world. Time is frozen everywhere, and because of that, the three of them can now leisurely walk over to the ransom exchange site and free Makoto and Tsubasa, Juri’s brother, who was with Makoto at the time of the kidnapping. With time in stasis, the three of them believe they can rescue their family and get back home again without putting anyone in danger or losing what money they have.

However, as they try carrying the time-frozen Tsubasa and Makoto home, they encounter other people moving in the stasis world, which should not have been possible.

Kokkoku has some really interesting worldbuilding involving the laws of the stasis world and its guardians, how things float without time to make them fall, and the unusual powers the Yukawa family members are able to manifest after spending a period of “time” in stasis. I especially liked that we have a multi-generational family all working together to save other family members. They’re dysfunctional at times (Takafumi is especially bent that his father has hid the stasis world from him his entire life), but they feel real.

The first half of the series is fun while all the worldbuilding is happening and secrets are being uncovered. Where it falls down is in the second half, when their enemy’s agenda becomes apparent, and by then, a couple of the Yukawa family members’ potentials are wasted. Takafumi becomes a joke and it feels like Tsubasa was being built up for something that just didn’t happen.

Kokkoku‘s final episode is built almost entirely towards a downer ending (which would be fine), but Juri is saved by a deus ex machina that literally comes out of nowhere involving a character we’d never been introduced to prior to the final minutes of the episode.

I did not particularly like the show’s attempt to build sympathy for its villain either. Considering how dangerous he is to the Yukawa family I was not in the mood to watch his sob story flashbacks, which are verbally told to our protagonists, and I’m not entirely sure why Juri and her grandfather would give him the time of day.

I don’t think I’ve watched a show that has started so high and fallen so low by its end as Kokkoku. If you don’t mind a bad ending, the first half’s worldbuilding and the premise itself is good; 95% of the series takes place within a single frozen “moment” of time. But don’t expect much in the second half.

Minuses: Second half falls apart, ending is a deus ex machina, some of the characters never reach their full potential