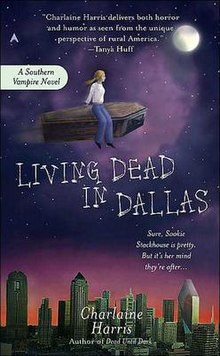 Living Dead in Dallas is a romance/mystery/horror novel from 2002, the second in the Sookie Stackhouse series of novels by Charlaine Harris, which is the basis of the HBO show True Blood–this book was the basis for season 2 of the show.  The first book in the series is Dead Until Dark, which I reviewed previously.

In this book, after a car breakdown and a fight, Sookie is attacked by a maenad, yet another of the supernatural creatures that secretly exists in this world.  Bill takes her to Fangtasia, the vampire bar in Shreveport, where the owner Eric Northman has only a little time to save her from certain death.  Soon he negotiates with Sookie for her to do some work for him–Eric is the sheriff of area 5, a position of authority to vampires in the local area, and as a favor to another area he has promised Sookie’s mindreading abilities to help  with an investigation in Dallas where the vampires suspect one of their human employees of betraying them.  Dallas is also the headquarters of The Fellowship of the Sun, a newly founded church dedicated to revealing vampires for the monsters that the church believes them to be.  Back in Bon Temps, the maenad’s influence is spreading–she demands tribute to her god, and will drive people mad if her demand is not met to her satisfaction.

This book was decently engaging and action-packed, with Sookie undercover in a strange city, surrounded by both supernaturals that she doesn’t fully understand, and by people who have dedicated their lives to trying to destroy the supernaturals.    The plot in Dallas was all interesting and engaging, though I thought it was weird that Sookie didn’t immediately ask why the Dallas vampires didn’t just glamour (a kind of hypnosis) their employees to get the answer.

I found the maenad subplot extremely disappointing in the book.  I’m not sure what it added at all, apart from giving us a sense of other kinds of supernatural things out there.  The resolution to that subplot just felt like the writer had gotten themselves into a corner and just gave up trying to find a satisfying or epic way to resolve it.  I was probably spoiled for it ahead of time because the maenad plot in True Blood Season 2, which was loosely based upon this book, was crazy and epic and freaky and really really good with a really cool resolution.

And, another thing that happened right at the beginning of the book that was extremely disappointing was the death of Lafayette Reynolds.  Again, I have probably been spoiled by watching the TV show first, but he was one of my favorite characters in the show, in part because you don’t see a lot of queer people of color in SF/F/H shows.  So it was a big letdown for him to play basically no important role in the books at all.

This book was okay.  It’s possible that I’ve been spoiled by the higher stakes and engaging nature of the TV show that’s based on it, which probably isn’t fair since the TV show wouldn’t exist without the book.  This one soured for me at the beginning with the death of Lafayette and only went down from there.